We often refer to the revolution in the Elizabethan theatre as the “golden age” of English drama. The Rose theatre was central to that blossoming of drama that took place in London during the Tudor period.

The Globe theatre, because of its association with William Shakespeare, is now, as we look back on the London of that time, the most famous Elizabethan theatre. It was Shakespeare’s theatre, staging Shakespeare’s plays, and therefore is of most interest to modern tourists and Shakespeare enthusiasts, particularly as it has been reconstructed on a site near to the original building. The Rose theatre is by far the most important theatre regarding the development of English drama and the English theatre, however, and more interesting to historians and Renaissance scholars than The Globe.

Theatres were forbidden in London but because of the great interest there was among its citizens, and the money to be made from that, more than twenty theatres sprang up across the river around Southwark, all in fierce competition with each other, all recruiting actors and writers, all staging as many plays as they could manage in a week in order to catch the addictive hunger of Londoners, who had no other public entertainment, apart from bear-baiting and cock-fighting.

And so, for a population of about 200,000, to attract audiences the theatres competed with each other and found themselves having to present a new play every few days. It is that arithmetic that accounts for the age being a golden one for drama. The writing of plays was like the work done on a production line in a busy factory. Although Shakespeare became very famous and a favourite of London audiences, he was only one of the scores of writers. The regular demand for new plays accounts for his large output. But even so, the thirty-seven plays credited to him did not constitute a particularly large portfolio. Many of his contemporaries wrote more than that. It is difficult to credit any of them, including Shakespeare, with any plays exclusively, as they worked in teams and then one of the team would usually get his name on the billing. Robert Greene, credited with about forty plays, and Thomas Kyd, for example, were every bit as popular with Elizabethan audiences as Shakespeare was. They were both friends of his and he worked with both, and several others, including the very famous Christopher Marlowe.

Even if Shakespeare had never lived the Tudor age would have been the golden one regarding plays. We would now be paying more attention to writers like Jonson, Webster, Decker, Greene, Marlowe and perhaps particularly, Fletcher. There was never a time that so many playwrights wrote so many plays. Sadly, while plays by those writers are still sometimes performed, apart from a few, like Marlowe and Ben Jonson, their names have faded in the sunshine of Shakespeare’s.

The Rose theatre was at the forefront of this Tudor revolution. It was built in 1587, only the fifth of the twenty-two purpose-built theatres around London, and the first on Bankside, a square mile that became the Elizabethan and Jacobean theatreland, the Elizabethan equivalent of Broadway in New York and the West End in London. It was more than just the theatre district – it was the place you went to have a good time; to visit a brothel or a gambling house or see a cock-fight or to cheer on the bear baiters in a sport also enjoyed by the Queen.

Trying to recover The Rose in recent times has been difficult in that it was built on a soggy piece of land that had been reclaimed from the Thames. It was leased to businessman and property developer, Philip Henslowe, who played an enormous role in the development of drama in England and cannot be under-rated. He employed a carpenter, John Griggs, to build a theatre for him and set about cashing in on what he could see was going to become a huge and lucrative industry.

We don’t know much about the first few years of the theatre’s deployment but in 1592 Henslowe began using what is now probably the most valuable document in English literary history. It was an accounts book, detailing money spent on the theatre, the plays, the actors and much more besides. It is a rich source of information about who wrote what, who acted in what, how much writers actors and others were paid, when plays were first performed, and so on, and on, even details of stage props and costumes.  Also, in 1592, Henslowe’s step-daughter married the superstar of London theatre, the actor, Edward Alleyn, who then took a great interest in The Rose and helped promote it as the foremost London theatre.

As a result of Henslowe’s accounts book having survived, among other information, we know that Marlowe’s Doctor Faustus, The Jew of Malta and Tamburlaine were performed at The Rose, as well as Kyd’s The Spanish Tragedy and Shakespeare’s Henry VI part 1 and Titus Andronicus. We also have details of who the actors were and how much the playwrights were paid. (As a matter of interest the rate was about £5 for a play.)

Other entrepreneurs, inspired by Henslowe’s success, began building theatres on more stable land – more modern, larger, theatres – and eventually, their theatres eclipsed Henslowe’s. By 1603 The Rose theatre had fallen out of use and by 1606 it was just an abandoned, ramshackle building. Then it disappeared as a recognisable theatre.

It is only now in the past century, with a revived interest in Tudor theatres, that it is once again included in the equation, now reopened as The Rose Playhouse.

In 1989 the site was discovered by developers building an office block. It was preserved and now visitors can view it. They can go on to a viewing platform and see where the theatre’s courtyard was, and the position of its two stages. There is an exhibition about the theatre, including information about the whole of the Bankside theatre world of the Elizabethan and early Jacobean period. 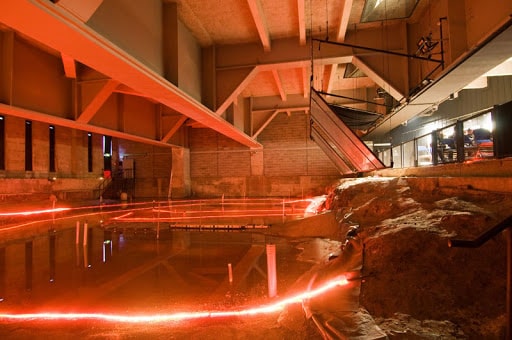 Floor of the original Rose Theatre, marked out in red lights