The Complete Works of William Shakespeare: The First Folio

The first collection of Shakespeare’s complete works, known as ‘The First Folio‘, is arguably the most important document in the cultural history of Europe. Without it, there would be no such thing as ‘William Shakespeare’. It is almost a miracle that the First Folio (Complete Works of William Shakespeare) exists at all, given that playwrights tried to keep their plays out of print – mainly to avoid them being pirated – that Shakespeare never published any of his plays, and that not one of Shakespeare’s manuscripts has survived. We owe this book and the fact that we have the texts of so many of the Bard’s plays to the enterprise of two actors. John Hemminge and Henry Condell, two of Shakespeare’s friends and fellow actors, edited the collection.

The First Folio (Complete Works of William Shakespeare) were set out in the three categories of Comedies, Histories and Tragedies, a categorisation that still dogs the practice of Shakespeare criticism, education and performance today. Hemminge and Condell probably had copies of the plays in Quartotexts, the scripts used by the actors in performance. It was from these that the First Folio would have been compiled. The editors knew Shakespeare and his work intimately and had worked with him for years. The playwright actually mentioned them in his will, leaving them money to buy themselves rings.

The printer and publisher of the First Folio were William Jaggard and his son Isaac. It was a major venture, both in editing and printing. It consisted of 36 plays and amounted to 900 pages – a huge book. About 500 copies of the First Folio were printed and sold at the price of £1 each. Two hundred and thirty-eight known copies exist today of which a third are in the Shakespeare Folger Library in Washington. The First Folio was printed seven years after the death of William Shakespeare in 1616. During the four hundred years since then, there have been thousands of publications of the complete works of William Shakespeare in hundreds of languages and it is one of the most common books to be found in the bookshops of the world.

The title page of the First Folio displayed a copper engraved image of Shakespeare by the engraver Martin Droeshout: 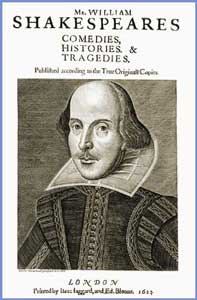 See other images of Shakespeare >>

The Plays Included in Shakespeare’s Folios

The editors of the First Folio seem to have worked from several sources. They had the flawed texts of six plays, the so-called ‘bad’ quartos, one ‘doubtful’ quarto, and eleven ‘good’ quartos. They used Shakespeare’s own manuscripts – known as ‘foul papers’ for a first draft, and a ‘far copy’ for an edited transcript loose sheets kept by actors, and the ‘prompt book’ approved by the royal censor. The editors or publishers also had to negotiate the right to print plays that existed in quarto editions that had not sold out – Troilus and Cressida, for example, is not listed in the contents page of the First Folio because that page was printed before permission to include the play was obtained.

There are even different editions of the First Folio since the 750 to 1200 first run was printed over at least 18 months. Copies cost around one pound each. A second edition was printed in 1632 and a Third Folio in 1663. In 1664 seven new plays were added to the Third Folio, although of these seven only Pericles would eventually be accepted as authentic. This ‘contaminated’ edition was replaced with a Fourth Folio in 1685.

The debate over the Shakespeare canon rumbles on even today. Pericles was omitted from the First Folio, less because of doubts over its authenticity than because of the editor’s dissatisfaction with the available text, but after it was added to the Third Folio in 1664 it was never removed. In contrast, although The Two Noble Kinsmen was attributed to Shakespeare and John Fletcher when published outside of the Folios is 1634, it was a further three centuries before it was included in the collected plays. Cardenio, a play performed on several occasions in 1613 was also attributed to Shakespeare and Fletcher when it was registered for publication in 1653, but no text survives. Then, in the 1990s, publishers decided to include Edward III as a 39th play, albeit recognizing it as a collaborative effort. Still not included in the canon is Sir Thomas More, which includes 147 lines thought to be Shakespeare’s handwriting. Written around 1595, the play was initially banned in theatres, but Shakespeare may have been brought in to rewrite one controversial scene.

The Influence of The First Folio

Shakespeare’s friend and fellow playwright and poet, Ben Jonson, remarked that Shakespeare ‘was not of an age, but for all time.’ It was a remarkable comment given how difficult it is to predict the future and to judge for how long any work of literature will remain relevant, but he was right: four hundred years on Shakespeare’s achievement has been to universalise the experience of living and writing in late 16th century England to emerge and to remain for all time the most loved, popular and widely-recognised writer the world has ever known.

The influence of the plays in the First Folio, not only on the English-speaking world but across all cultures, is immense. Every generation continues to be in Shakespeare’s debt. His plots have inspired ceaseless adaptations and spin-offs, and continue to do so. His phrase-making recurs on the lips of millions who do not realise they are quoting Shakespeare: “a fool’s paradise”; “the game is up”; “dead as a doornail”; “more in sorrow than in anger”; “cruel, only to be kind”; and hundreds more. Moreover, he was a great inventor of words and that, together with his phrase-making, has immeasurably enriched the English language.

The plots, populated with the most famous and unforgettable characters, many of whom we feel we know as real people, address almost every situation that may confront a human being of any culture, and for each of those situations, there are profound observations from the characters. Shakespeare is a teacher from whom there are lessons on everything that we may come across in life. The book is a mirror in which we can reflect themes of love and hate, war and peace, freedom and tyranny. All other cultures translate, adapt and perform the plays regularly and they are the most performed plays on earth.

English history has been transformed by Shakespeare. Any of the kings and queens who appear in the First Folio become the historical figure they represent in that it is difficult for scholars to get back to the real person. We always see Shakespeare’s kings as the real kings as they appear before us on the stage so realistically. For example, Richard III has little hope of ever being other than the hunchbacked psychopathic villain or Henry V as the best king who ever lived. The former’s faults and the latter’s virtues as portrayed by Shakespeare have become too real and too entrenched in our imaginations and in our culture for us to see them any other way. In that way, Shakespeare has shaped the way we look at Mediaeval English history and the lessons that can be learned from it.

The First Folio is the book from which most quotations are made when we look for an apt way of commenting on something. As Shakespeare’s texts penetrate more and more into even the minor cultures of the world his great book of plays becomes increasingly influential and it is impossible to see how that influence could ever cease as long as there are still people on this earth.

Whilst the St Omer first folio is missing the first 12 title pages – which record the printing date and location – it’s still a massively important discovery, as each first folio can contain variations that shed light on the bard’s meaning and intentions. Among the 900 pages of the most recent discovery are rare annotations that suggest it may have been used for performance.

Just as in 21st century Europe there were very porous national borders in 16th century Europe, with Elizabethan England an attractive place for people seeking work and migrants crossing the Channel in large numbers. Given the fluidity of people across Europe in the 16th century, it should not seem so surprising that the 233rd known Shakespeare first folio was discovered not in London, Stratford or elsewhere in the UK, but in northern France.

The place is significant as St Omer is close to Calais, the main crossing place from France to England. The scholars who have been considering this find have lost no time in going about the scholarly business of speculating as to how the book came to be in St Omer. The librarians called in a remounted folio expert, one Mr. Rasmussen, a professor at the University of Nevada in Reno. The book is part of a collection inherited from a long dissolved Jesuit training college. Mr Rasmussen thinks that its location may tell us something about Shakespeare’s religious affiliations – that perhaps he was a secret Catholic. Rasmussen has made that connection for some reason, possibly because it would make a nice addition to the ‘evidence’ for that. But he is moderate about it. The discovery of the folio in St.-Omer provides a bit more ballast, he said, if hardly a smoking gun.

It may simply be that a traveler stayed the night at the Jesuit college and left the book there by mistake, as people do, or that a teacher from England worked and died there and his books were just collected up and left in a loft for a few centuries, or a college librarian or teacher bought a copy while visiting England. With such a volume of traffic, anything could have brought the book to St Omer. It could have nothing to do with anything Shakespeare did.