Judith Quiney was born in Stratford-upon-Avon in January 1585, along with her twin brother, Hamnet. The two were Shakespeare and Anne Hathaway’s second and third children. Their first child, Susanna, was the eldest, born in 1583.

Judith was baptized on the 2nd of February in 1585 in Holy Trinity Church and named after a family friend, Judith Sadler, while her brother was named after Hamnet Sadler, Judith’s husband.

Unfortunately, very little to nothing is known about Judith’s youth. It is likely she never received any formal education and that she was never taught how to read. Scholars know that her twin, Hamnet Shakespeare, died when he was eleven years old in August 1596 in Stratford. This early loss likely deeply affected the young girl and her parents. Hamnet was her only brother and Shakespeare and Anne’s only son. 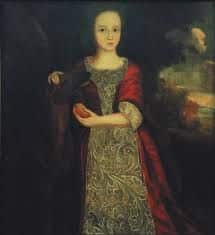 Portrait of Judith Quiney as a girl

The first event of note in her adult life was her marriage to Thomas Quiney on 10 February 1616 when she was thirty one and he was twenty six. He was a vintner (someone who makes and sells wines) and the son of a wealthy local family. The two were married in the pre-Lenten season of 1616 in Holy Trinity Church. The time of year was prohibitive for marriages and the two did not obtain the proper license, issued from the Bishop of Worcester, to marry during this period. Although this was a small infraction, and likely the mistake of the minister, things escalated when Thomas did not show up for a required court date.

Since Thomas did not appear for his court date in front of the Consistory court in Worcester, he was excommunicated from the church. This occurred towards the beginning of March in 1616. It is likely, although not entirely clear, whether or not Judith was also excommunicated.

In January of that year, Shakespeare wrote Quincy into his will, signaling that he supported the marriage. But, things quickly changed when it was discovered that Thomas had kept a mistress throughout his courtship of and marriage to Judith. Things only got worse when it was revealed that Thomas’ mistress, Margaret Wheeler, was pregnant. Some have speculated that this pregnancy might account for the speedy arrangement of his marriage to Judith. Soon after the marriage, Margaret and the child both died.

This series of terrible events was not yet over. Thomas was tried in the church court and sentenced to public penance. He was to stand in front of the Holy Trinity Church, in front of the congregation, wearing only a white sheet for three Sundays. This part of the sentence was commuted, and he had to pay a five-shilling fine to the parish poor.

While this tumultuous period was ongoing, Shakespeare revisited his lawyer and changed his will. It no longer bequeath anything “vnto my sonnin L[aw].”

Instead, Shakespeare had Thomas’ name replaced with Judith’s. These years of Judith’s life were tough, and although there are no records of her thoughts at the time, she very likely compared herself to her sister, Susanna, who had a successful marriage.

In her father’s will, Judith received 150 pounds, a silver bowl, and money for herself and her children. Then, a bit more money if she and her children survived for three more years. Records are not clear in regards to where the couple lived after they got married. Judith received the Chapel Lane cottage that once belonged to her father, and Thomas had a tavern on High Street.

At one point, Judith and Thomas lived in a house called “The Cage” at the corner of High Street and Bridge Street. The building is connected with Judith Quiney to this day. It got its name from the fact that it had once been a prison. Long after her death, the store was renamed in her and her father’s memory. It existed for a time in the early 1900s as the “Shakespeare View Store.”

Although Judith inherited some wealth from her father, Susanna received much more. This included his home in New Place. William Shakespeare died in 1616, the same year as Judith’s marriage. Luckily, he revised his will in time.

Judith gave birth to a son in November of 1616 and named him Shakespeare. Another sadness struck her life when he died at only six months old in March of 1617. She has two more sons, Richard and Thomas. The two lived until 1639 when they died within a week of one another. They were twenty-one and nineteen at the time. Their cause of death is unknown.

Judith Quiney died on the 9th of February in 1662, just after her 77th birthday. She was buried in the cemetery of the Holy Trinity Church. Her husband outlived her, but just barely. He perhaps died sometime between 1662 and 1663. He, too, was buried in the churchyard, but the locations of their graves are lost to time. In what is another striking difference between Judith and her sister Susanna is the fact that Susanna and her husband were buried in the church chancel rather than in the yard.

Due to the scandal that defines contemporary knowledge of her life, and her relatively long life, Judith Quincy has made a mark on modern and classic literature. She appeared in William Black’s Judith Shakespeare: Her Love Affairs and Other Adventures, published in Harper’s Magazine and in a graphic novel by Neil Gaiman, as well as in a Kenneth Branagh film, All Is True.

Susanna Shakespeare, Shakespeare and Anne Hathaway’s oldest child, died in July of 1649 at the age of 66. Today, Shakespeare has no direct descendent. His four grandchildren all died without heirs although his sister, Joan, did carry on the line with her husband William Hart.