The Bard of Avon, William Shakespeare

When we hear the term ‘The Bard‘ our minds immediatley spring to the name William Shakespeare. More specifically, Shakeseare is known as ‘The Bard of Avon‘. This is because he seems to have been given the title in recognition of his stature as ‘great poet’ and the unofficial national poet of England. It was only as the twentieth century advanced that he became inextricably identified with that title. Before that, the mind sprang to the name ‘Robert Burns‘, the Scottish poet. The Scots, proud of their national poet, would still argue that point as to who ‘The Bard’ actually is!

So it is a relatively recent development that this general, descriptive noun has taken on a specific meaning. The word is very old and referred, originally, to a poet generally, especially one who wrote impassioned, lyrical, or epic verse. Bards were originally Celtic composers of eulogy and satire; the word came to mean more generally a tribal poet-singer gifted in composing and reciting verses on heroes and their deeds. As early as the 1st century AD, the Latin author Lucan, referred to bards as the national poets or minstrels of Gaul and Britain.

The word ‘bard’ has lost its original meaning, although we might use it ironically to refer to a friend or local person who writes poems. In present-day usage the term ‘bard’ has become synonymous with a revered poet (and one who has gifted the world with so many wonderful quotes). Given the reverence in which Shakespeare is held worldwide, and given that the original bard’s tale was of great deeds, great events, and the great themes of heroism, love, war and death, it seems indisputable that Shakespeare is entitled to the name, ‘The Bard’. One of the reasons Shakespeare’s plays and his characters as diverse as Lady Mabeth and Prospero have lasted and grown ever stronger in the worldwide public consciousness as time has passed is that his stories are all filled with those ingredients. Some explore war, some death, and some love; and some explore them all in one play.

The word ‘bard’ has been hijacked in recent times and used to promote things such as role-playing game ‘The Bard’s Tale’ and a titles for festivals. In the case of festivals, the title invariably refers to festivals associated with Shakespeare, such as the classic ‘Bard on the Beach‘. 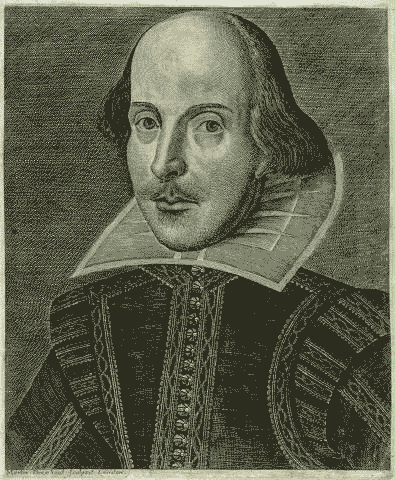 The Droeshout portrait of WIlliam Shakespeare, Bard of Avon