Nathaniel Hawthorne  was a novelist and short story writer. Hawthorne’s works have been labelled ‘dark romanticism,’ dominated as they are by cautionary tales that suggest that guilt, sin, and evil are the most inherent natural qualities of humankind. His novels and stories, set in a past New England, are versions of historical fiction used as a vehicle to express themes of ancestral sin, guilt, and retribution.

Although his natural inclination was to express himself through the short story form, he is best known for his novels, and particularly his most famous, The Scarlet Letter, a romance in an historical setting – puritan Boston, Massachusetts, in the 17th century.  It is the story of the unfortunate Hester Prynne, who gives birth to a child as a result of an affair with a preacher, and struggles to create a new life of repentance. The novel explores the themes of sin, guilt, and legalism.  D.H. Lawrence wrote that there could be no more perfect work of the American imagination. 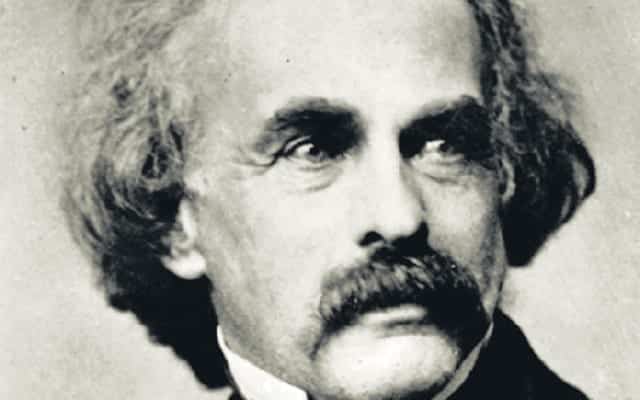 Hawthorne is ranked among the top American writers. He is admired by other writers, particularly, as a skilful craftsman with an admirable sense of form, which is highly architectural. The structure of his novels, The Scarlet Letter being a striking example, is so tightly integrated that it would be impossible to omit any paragraph without doing damage to the whole. The book’s four characters are inextricably bound together in a complex situation that seems to be insoluble, and the tightly woven plot has a unity of action that rises slowly but inexorably to a highly dramatic climactic scene. In the short stories, too, there is that tight construction. Hawthorne is admired, too for the directness of his writing, and its clarity

Hawthorne’s greatness is due partly to his moral insight. He was deeply concerned with original sin and guilt and the claims of law and conscience. He delved deeply and honestly into life, in which he saw much suffering and conflict but also the redeeming power of love. He is uncompromising in his presentation of those things, firmly and resolutely scrutinising the psychological and moral facts of the human condition. His greatest short stories and The Scarlet Letter are characterised by a depth of psychological and moral insight unequalled by any other American writer.

Hawthorne is also admired for his mastery of allegory and symbolism. His characters’ dilemmas and their response to them express larger generalizations about the problems of human existence. The power and gravity with which he deals with that results in true tragedy.

And now, in the 21st century Hawthorne holds a pre-eminent place in American letters. He was a major influence in the artistic development of such writers as Herman Melville, Henry James, William Dean Howells, Mary Jane Wilkins Freeman, Sarah Orne Jewett, William Faulkner, and Flannery O’Connor – members of the so-called Hawthorne School. His focus on the past of the nation, especially the Puritan era, his delving into the social and psychological forces underlying human behavior, his reliance on symbols to convey rich and ambivalent value to his stories and romances, his insistence on finding and understanding the sources of humanity ‘s darker side, and his exploration of such themes as isolation, guilt, concealment, social reform, and redemption not only created a following among aspiring writers but also brought him into the nation’s classrooms, where The Scarlet Letter still holds a firm place.

Interested in Nathaniel Hawthorne? If so you can get some additional free information by visiting our friends over at PoemAnalysis to read their analysis of Nathanial Hawthorne’s poetic works.