The Divine Comedy: An Overview

You are here: Home1 / English Literature2 / The 20 Most Influential Works of Fiction3 / The Divine Comedy: An Overview

The Divine Comedy is the pre-eminent Italian literary work. It is a long narrative poem written between 1308 and 1320 by Dante Alighieri, an imaginative vision of the afterlife, in which the protagonist, Dante, visits hell (Inferno), purgatory (Purgatorio), and heaven (Paradiso). The poem is divided into those three parts. Although it depicts the adventures during a journey through these three lands, on a deeper level, it represents allegorically, the soul’s journey towards God, from the darkest depths of Hell to the light and joys of Heaven. The poem is based on Christian theology and philosophy. 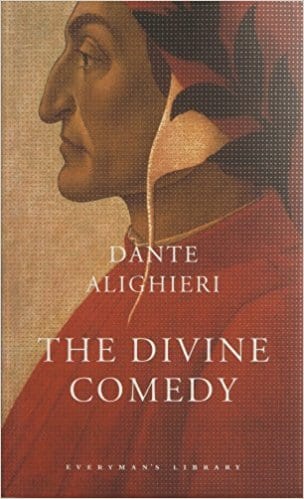 The poem is written in the first person.  Dante travels through the three realms of the dead, guided through Hell and Purgatory by the poet, Virgil. When he arrives in Heaven he meets his ideal, perfect woman, Beatrice, who guides him through that realm. Beatrice was based on a woman he had known in childhood and continued to admire during subsequent years, and he now meets her in this poem.

Hell is divided into realms, at the bottom of which is the dark city of Dis, completely without light. Dante meets various characters who are beyond hope, confined forever in the darkness of hell, forever deprived of the light of God, and he hears their stories.

The mythological king of Crete, Minos, sits at the entrance to the second circle of Hell Sinners have to confess all their sins to him and he throws them down to the circle to which he has assigned them.

There are lovers, condemned for an adulterous relationship, and various characters representing a variety of sins. Plutus, the mythical god of riches represents the greedy; one of Dante’s political enemies, Farinata, is being punished for heresy; Capeneus is a blasphemer; Brunetto Latini is being punished for sodomy – and many others. Judas, Brutus, and Cassius are in the lowest circle Hell and are being chewed by the monster, Satan. Their sin is betrayal – the three greatest traitors in Dante’s opinion.

The three archetypal traitors are chewed by the monster Satan in the lowest circle of the Inferno. Judas was Jesus’ disciple who betrayed him to the Pharisees for money, leading to his crucifixion. Brutus and Cassius betrayed Julius Cæsar, the greatest leader of the Roman Empire, which also led to his death.

Dante and Virgil then ascend to the Mountain of Purgatory. The mountain has seven terraces, corresponding to the seven deadly sins and as they climb the mountain Dante meets characters who are atoning for their sin in each of those terraces. The Purgatorio represents the Christian life.

Beatrice guides Dante through the nine concentric and spherical spheres of Heaven. The structure of the Paradiso is based on the four cardinal virtues and the three theological virtues.

Dante meets and talks to several great saints of the Church. The Divine Comedy finishes with Dante seeing God. In a flash of understanding that he cannot express, Dante finally gains insight into the mystery of Christ’s divinity and into humanity and he is embraced by God’s love.

The Divine Comedy is a religious poem. However, the science of Dante’s time is evident in the poem.  The Purgatorio repeatedly refers to the implications of a spherical Earth with the different stars visible in the southern hemisphere, the position of the sun and the different time zones of the Earth.

The Divine Comedy became the image of life after death in Western culture and it has been a source of inspiration for countless artists for almost seven centuries. There are many references to Dante’s work in literature, music and art.