You are here: Home1 / English Literature2 / The 20 Most Influential Works of Fiction3 / Don Quixote: An Overview

Don Quixote is a Spanish novel published in two volumes in 1605 and 1615. Its full title is The Ingenious Nobleman Mister Quixote of La Mancha. The author, Miguel de Cervantes Saavedra, is an almost exact contemporary of William Shakespeare. It is one of the earliest European novels and one of the most influential. It is widely considered to be the best novel ever written.

The narrative recounts the adventures of a Spanish nobleman (Hidalgo), Alonso Quixano, who is obsessed with chivalric romances. He loses his ability to distinguish between reality and fantasy and declines into insanity. He determines to set out on a mission to revive the chivalry that he’s read about – to right wrongs and to restore justice to society. He casts himself as a knight, assumes the name, Don Quixote de la Mancha and recruits a farmer, Sancho Panza, as his squire. He sets out and interprets everything and everyone as an element of the romantic story he is living out. Sancho Panza watches out for him, offering a realistic perspective on the adventures and employing a witty commentary in his response to Don Quixote’s mad ramblings. 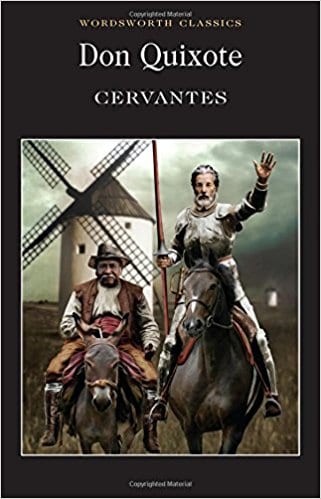 Don Quixote is an enormously influential novel. The adventures are quoted and used over and over again in western culture. In the way that Shakespeare’s plays cemented the modern English language, Don Quixote did that for the Spanish language. Cervantes was every bit as adventurous, both in storytelling and language, as Shakespeare was. Like Shakespeare, many of his phrases became staples of idiom in his language. Like Shakespeare, too, he made liberal use of verbal playfulness and punning.

The main influence of the novel is how it influenced prose writing in the subsequent centuries. It found the full flowering of that in the 20th century when prose writers departed from the traditional classic realism in their narrative to what is known as ‘postmodernism.’ It is interesting that what was virtually the first novel is the great model and blueprint for 20th and 21st century prose literature. Cervantes invented techniques to tell his story that have been rediscovered by modern writers, such as metafiction, a device in which aspects of the narrative draw attention to the fact that the reader is reading a fiction; intertextuality, a device that creates an interrelationship between texts, intended to add layers of depth to a text, relying on the readers prior knowledge and understanding of the other texts, and other devices like pastiche, fragmentation and hyperreality.