You are here: Home1 / English Literature2 / The 20 Most Influential Works of Fiction3 / Le Morte d’Arthur: An Overview

Le Morte d’ Arthur tells tales of the legendary King Arthur is a figure who looms large in English and French culture. Thomas Malory collected stories, both French and English, about him and put them into one book, translating the French material himself. He also added original stories of his own. It is from Malory’s text that the innumerable books and films that deal with the Knights of the Round Table, Queen Guinevere, Sir Lancelot and his son, Galahad and the wizard, Merlin, get their material. Every English child grows up with strong images of King Arthur and the Knights of the Round Table, and are familiar with the characters – and Arthur’s famous sword, Excalibur. The mediaeval view that we have of the age of courtliness and the adventures of the knights and their king comes mainly from Malory.

Before Malory collected the stories together the characters of Arthur and his knights were already well-known in England. We think that Arthur actually existed, and even that he is buried at Glastonbury, but that is doubtful, or at least not in the form we know him today. He is as much a fictional character as Hamlet or Don Quixote are. In the 9th Century, an historian named Nennius gave the name Arthur to a 6th Ccentury Roman-British general who fought some battles against invading Saxons. It wasn’t until two centuries later, however, that Arthur fully captured the imagination of the English. The French Normans who invaded England around that time traced their ancestry back to Arthur and used that as an excuse for their reign in England. So, from that point on, tales of Arthur and his knights became popular at royal courts. 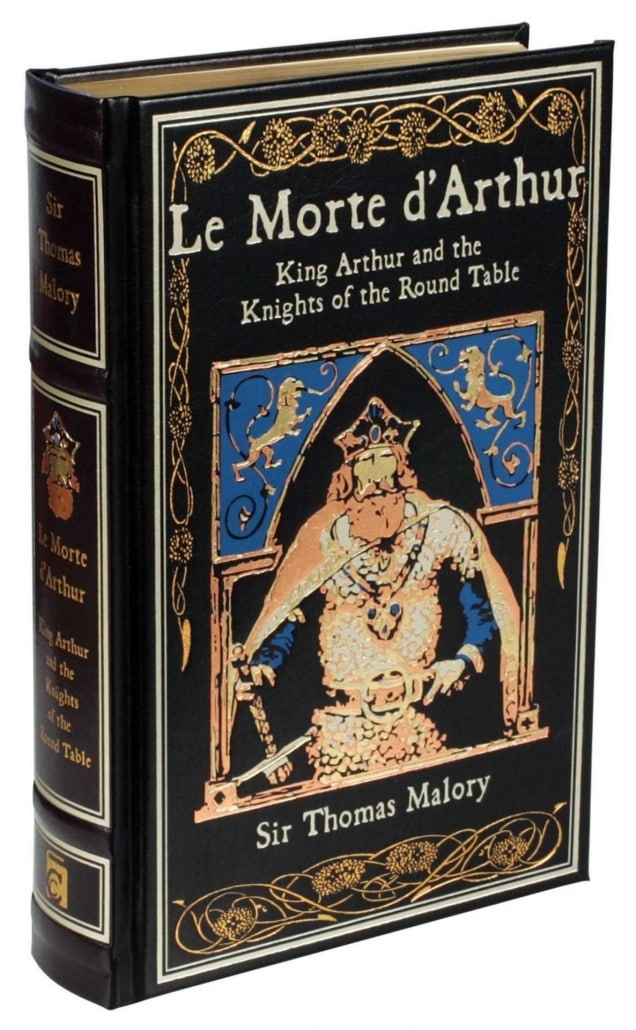 Le Morte d’Arthur was published in 1485 by William Caxton. One of the most famous writers who used the book as a model for his work was the poet, Tennyson, who rendered the tale of Arthur’s death into a great narrative poem, The Idylls of the King. There have been countless films and tv series depicting the adventures of the Knights of the Round Table. Several of Wagner’s music dramas are based on Malory’s tales. T.S. Eliot’s seminal early 20th Century poem, The Wasteland, is as much about Malory’s themes and the quest for the Holy Grail as about anything else. There are numerous paintings and sculptures depicting the adventures of the knights, notably by the Pre-Raphaelites, whose imaginations were set on fire by the legend.

This is also an important work linguistically. Coming after Chaucer, who wrote in Middle English, and before Spencer and Shakespeare, who wrote in Early Modern English, Le Morte d’Arthur is a script written somewhere between the two – although much closer to Early Modern English – and demonstrates an evolving language. It is, therefore, an invaluable document in the study of the English language.

The story is set in the 5th Century and there are eight tales:

Something that may account for the success of the narrative is that it expresses the universal human themes that drive the story. Love, conflict, death, loyalty and betrayal have appealed to readers down the centuries and appear in all great works of literature, notably, Shakespeare. Every age reworks these themes for its own purposes and Arthur and his knights have been revisited constantly over the centuries in European literature.