‘A Blessing In Disguise’, Meaning & Context

Meaning of “a blessing in disguise”

“A blessing in disguise” is an idiom that refers to the idea that something that appears to be a misfortune or a piece of bad luck can have unexpected benefits. It is frequently used in everyday speech and has wide usage in the titles of creative works – novels, songs, poems and more.

Origin of “a blessing in disguise”

The idiom first appeared in a 1746 hymn by James Hervey “Since all the downward tracts of time”.

In the hymn, Hervey meditates on the wisdom of accepting whatever God, in his infinite wisdom, chooses to bestow on us, even things that appear at first to be negative, because they are “blessings in disguise”.

The lyrics of this short but sweet hymn are:

Since all the downward tracts of time
God’s watchful eye surveys,
O who so wise to choose our lot
Or to appoint our ways?

Good when He gives, supremely good,
Nor less when He denies;
Ev’n crosses from His sovereign hand,
Are blessings in disguise.

Why should we doubt a Father’s love,
So constant and so kind?
To His unerring, gracious will
Be every wish resigned.

Ways “a blessing in disguise” has been used

The phrase has been used in a variety of mediums. In 1865, a cartoon titled “Blessings in Disguise” from the American Civil War era showed President Jefferson Davis surrounded by cities in which the Confederates had been defeated, asking whether the losses were a “blessing in disguise” that prevented the Confederate Army from being stretched too thinly.

The British Medical Journal commented on a number of cases where an assault or injury inadvertently led to the curing of a medical condition, describing them as surgical blessings in disguise.

The phrase has been used as the title of multiple books and other cultural items, such as the novel by Danielle Steel (2019), songs by Michael McDonald, Michael Martin Murphy and several others, It is also the name of a charity. 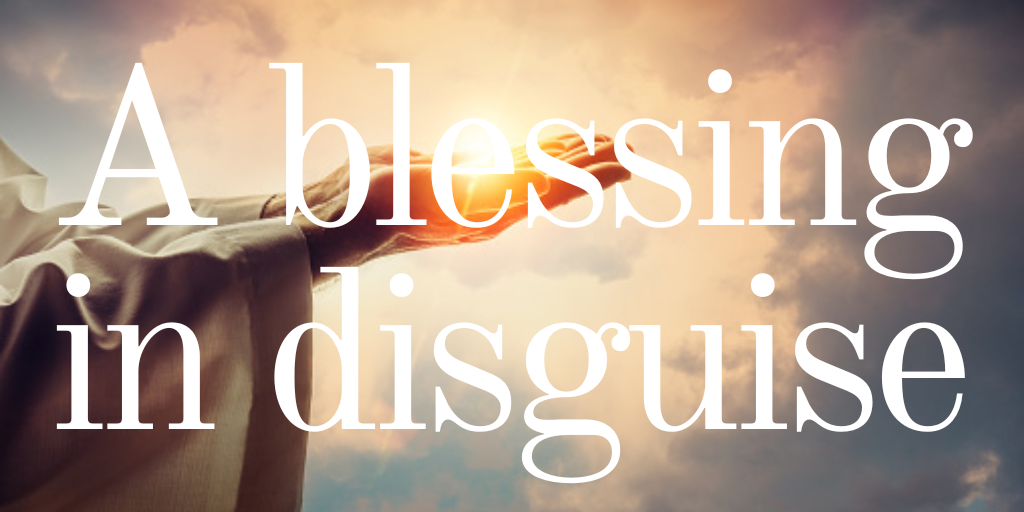 A blessing in disguise

The blessing in disguise of a Chinese folk tale

There is a traditional Chinese folk tale that tells of how an injury saved a man’s life by preventing him from being killed in battle:

There was a kind old man who lived on the plains outside the Great Wall of China. The gentle man had two passions in his life: collecting rare breeds of horses, and his son, whom he loved more than anything else.

The old man and his son would travel great distances to trade horses, meet new people, and enjoy the good fortune that life had bestowed upon them.

One morning, a servant left the stable door open and one of the old man’s favourite stallions escaped. When the neighbours heard the news of the stallion’s escape, they came to comfort him. They told him they were sorry he had had such bad luck.

The old man wasn’t upset. He explained that losing the horse wasn’t necessarily bad luck. There was no way to predict that the horse would escape, it just happened, and now there was nothing that anyone could do about it.

A week later, the stallion came back, and he brought with him a mare, a rare and valuable white mare. When the neighbours heard of the old man’s good luck, they quickly came to congratulate him. But again, the old man was not excited. As he had explained before, it was not necessarily good luck that had brought him this new and beautiful white horse. It just happened, and there was no reason to get excited over it.

Some time later, while his son was riding the white horse, she slipped and fell. She landed on the son and broke his leg. The neighbours came to the old man’s house again, to give their sympathy for the bad luck that had befallen his son. One of the neighbours suggested that the old man sell the mare before any more bad luck could happen, and others said that he should take his revenge and kill the mare. However, the old man did neither. He explained to the neighbours that they should not feel sorrow for his son, nor anger towards the mare. It was purely an accident that could not be predicted, and there was nothing he or they could do to change it.

A few years later an enemy invaded the country, and all the young men among the old man’s neighbours were drafted to defend the country against the attack. Because the old man’s son was lame, he did not have to join in the fighting. The war was very bad, and most of the neighbours were killed, but his son was spared because he had been hurt by the white horse two years earlier.

And so, the accident with the mare was a blessing in disguise.

Phrases related to “a blessing in disguise”