‘All Of A Sudden’, Meaning & Context

‘All of a sudden’ is often attributed to Shakespeare, but he did not use this phrase in any of his many works – at least not in that exact form.

The word ‘all’ is central to the idiom, but Shakespeare does not use that word in his version. In The Taming of the Shrew Shakespeare has Tranio speak the line:

“How is it possible that love should of a sodaine take such hold?”

The spelling of ‘sudden’ as ‘sodaine’ is not an issue as the two spellings refer to the same thing, but ‘sodaine’ is the Early Modern English spelling.

Shakespeare uses the word ‘sudden’ several times in his plays, and they are spelt in at least four different ways, as ‘sodeyne,’ ‘suddeyne,’ ‘suddaine,’ ‘sodden.’ However the word ‘all’ as part of this idiom could be an issue as without it the well-known expression doesn’t exist. So Shakespeare’s ‘of a sudden’ is not quite the same as the modern-day ‘all of a sudden’ idiom that we know.

The meaning of ‘all of a sudden’

‘All of a sudden’ means ‘suddenly.’ It has the almost identical meaning, except that ‘all of a sudden’ suggests something even a bit more unexpected than just a sudden occurrence of something. 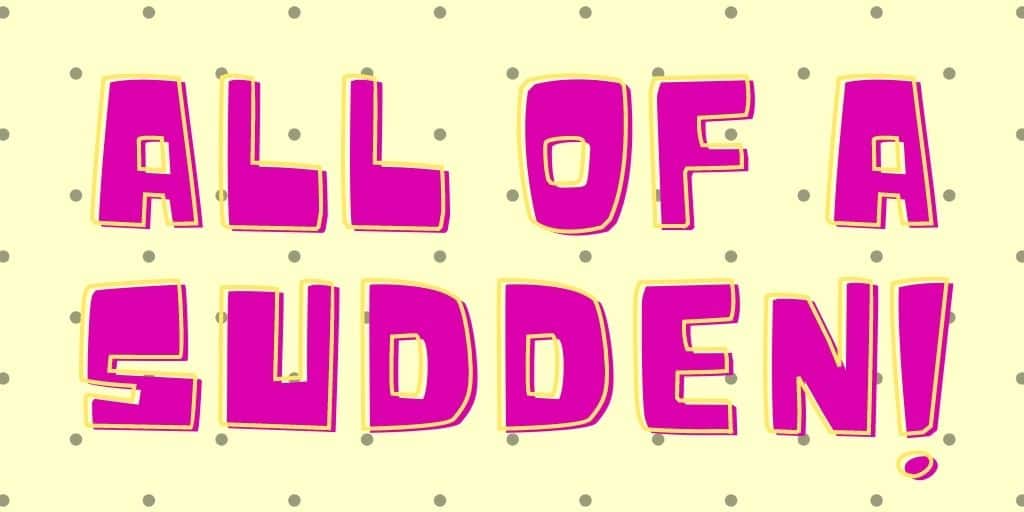 ‘All of a sudden’ – Shakespearean phrase… or not?

The word ‘sudden’ used as a noun

The most interesting thing about the saying is that the word ‘sudden’ is used as a noun – as a thing. But there is no such thing as a sudden. And yet we use it as a noun every day in our common speech– in that idiom – most of us without realising that we are using a word that doesn’t make sense in itself – that we are referring to something that doesn’t exist. And yet we all know what ‘all of a sudden’ means, even those of us who are among the least educated speakers of the English language.

‘Sudden’ is commonly used as an adjective to describe something, for example, a sudden noise, a sudden shower etc. Its use as a noun is archaic, which means that the English language has cast it out as a useable word. As there has never really been such a thing as a sudden, and so nothing to describe, the word did not last very long as an English word used as a noun: that started only in the second half of the sixteenth century, in expressions like ‘on a sudden,’ ‘upon a sudden,’ and the one Shakespeare used – ‘of a sudden,’ which is the closest to our modern ‘all of a sudden.’

And then, somewhere around the beginning of the seventeenth century, the word ‘all’ crept in, and by 1750 ‘all of a sudden’ became the dominant form of what is now an idiom. The older form, without ‘all’  –  ‘of a sudden,’ was still used for another century as it gradually died out.

The evolution of the idiom

Like everything in language, the idiom is still on the march, still evolving, and it’s possible that in subsequent centuries it may be overtaken by a mutation, ‘all of the sudden,’ which is already in evidence.

Although the term ‘all of the sudden’ is not generally used in the United Kingdom, it is gaining ground in America, and beginning to compete with ‘all of a sudden,’ and so Americans are quite likely to say ‘All of the sudden there was an explosion.’

There is no logical reason for that change but that’s the nature of the way a language develops – following the way people use it and becoming common usage according to that use.