To fight fire with fire means to respond to an attack by using the same tactic or method as the attacker to fight him (or her). Although expressed in military terms it can mean other kinds of fighting, which could be competing with someone in an entirely peaceful activity.

It also has a literal meaning as in fire-fighters using fires in combating fires.

‘Fire with fire’ in Shakespeare

In The Life and Death of King John the concept is expressed as ‘be fire with fire.’

“So, on my soul, he did, for aught he knew.
But wherefore do you droop? why look you sad?
Be great in act, as you have been in thought;
Let not the world see fear and sad distrust
Govern the motion of a kingly eye:
Be stirring as the time; be fire with fire;
Threaten the threatener and outface the brow
Of bragging horror: so shall inferior eyes,
That borrow their behaviors from the great,
Grow great by your example and put on
The dauntless spirit of resolution.
Away, and glister like the god of war,
When he intendeth to become the field:
Show boldness and aspiring confidence.
What, shall they seek the lion in his den,
And fright him there? and make him tremble there?
O, let it not be said: forage, and run
To meet displeasure farther from the doors,
And grapple with him ere he comes so nigh.”

Origin of the idiom ‘fight fire with fire’

The wording fighting fire with fire came much later than Shakespeare’s usage in 1596.

The phrase appears in print, almost certainly for the first time, is in a reminiscence by American writer, Henry Tappan’s reminiscence, A Step from the New World to the Old, and Back Again:

“Smoking was universal among the men; generally cigars, not fine Havanas, but made of Dutch tobacco, and to me not very agreeable. I had some Havanas with me, and so I lighted one to make an atmosphere for myself: as the trappers on the prairies fight fire with fire, so I fought tobacco with tobacco.” 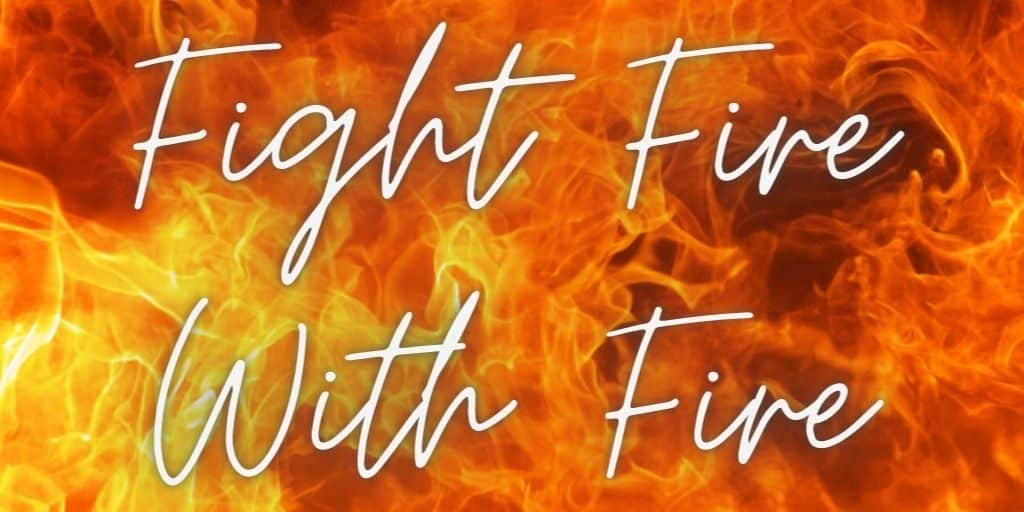 The concept of literally fighting fire with fire goes back to the settlers in America in the 19th century. In addition to hurricanes, and other devastating natural phenomena they were plagued with forest fires and grass fires. They developed the technique of deliberately raising controllable fires, which, under control, would destroy the fuel the big fire needed to keep going. Deprived of that, it would die out. That was the theory, and it worked in some circumstances, but in others it made things worse if their own fires got out of control.

Caroline Kirkland’s novel, set on the frontier in Michigan in the 1840s A New Home – Who’ll Follow? describes a spectacular failure of the technique.

“The more experienced of the neighbours declared there was nothing now but to make a “back-fire!” So home-ward all ran, and set about kindling an opposing serpent which should “swallow up the rest;” but it proved too late. The flames only reached our stable and haystacks the sooner.”

However, fire-fighters developed the procedure and foresters now routinely build unplanted areas into forests to act as fire-breaks in places that are at risk of fire.

These days the term ‘backfire’ is now more often used to mean plans that fail in a way that weren’t intended. That term derives from the tendency of early flintlock weapons to dangerously misfire. In the early 20th century it was used to describe the popping explosions that used to be commonly heard from the exhausts of motor vehicles.

Some other fire idioms

A baptism of fire – being pushed into a new place by having to deal with difficult or unexpected circumstances.

Fire away! – inviting someone to begin asking questions

On fire – excited, on a roll

To breathe fire – to be extremely angry

To have fire in your belly – to be determined

To get fired –to lose your job

To set the world on fire – to do something remarkable

To play with fire – to take a foolish risk