‘The World Is Your Oyster’ Saying Origin & Meaning

‘The world is your oyster’ saying is often said to young people about to embark on adult life. It simply means that everything is open to one, and if one is lucky they could encounter something special.

The metaphor that informs the saying is that if you have an oyster there is a chance that there may be a pearl in it. A nice fresh oyster can be hard to open, but once opened it’s good. And perhaps it may have a pearl in it, which would be a valuable addition to one’s life. So when we set out to seek our fortune, the pearl is the good luck we may have. If we’re lucky we will find it.

‘The world is your oyster’ origin

The saying has mysteriously evolved from its original appearance in Shakespeare’s comedy, The Merry Wives of Windsor. It’s slightly misquoted, as is so often the case with Shakespeare references that become English idioms. The actual quote is ‘The world’s mine oyster.’

Shakespeare re-introduces one of his most popular characters, Sir John Falstaff, as a con man, planning to con two Windsor women out of their money. He has his usual disreputables around him, among them a man called Pistol who utters the immortal line ‘the world’s mine oyster’ during a conversation about money. The conversation goes:

Falstaff: I will not lend thee a penny.

Pistol: Why then the world’s mine oyster, Which I with sword will open.

Falstaff: Not a penny.

It’s clear that the original metaphor of the world being an oyster had violent connotations. If you don’t give me money I will have no alternative than to use violence to get it. I will get what I want by robbery and murder. There is also a veiled threat against Falstaff personally, from this thoroughly disreptutable man, Pistol.

It’s an interesting metaphor as oysters are notoriously difficult to open and we use special sharp tools to do it. In a sense one has to use violence to open an oyster. So with Pistol we have the image of him forcing the oyster to get the pearl, and of him using his sword – making it doubly violent. It’s interesting too, that the image is of a food of those who live near the Thames, routinely eaten but which very occasionally would offer one a life changing discovery – just like life. Life can be hard but if you keep at it it will sometimes unexpectedly give you a reward. That’s why this quote ‘the world’s mine oyster’ has evolved into a favourite metaphor for life. 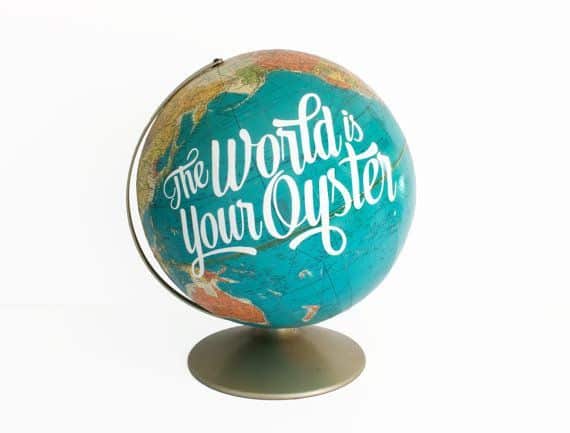 ‘The world is your oyster’ – another perfect Shakespeare phrase!