‘Break the ice’ is one of the most used idioms in the English language. Interestingly, it has not changed from its two first known uses in written English – first by Shakespeare, and then, a few years later by poet and novelist, Samuel Butler. Quite often an idiom has a literal origin and eventually comes to be used metaphorically. For example, the idiom, ‘throwing the baby out with the bath water’ means losing something important when trying to dispose of the less important things, but the saying came from Elizabethan bath time when the baby was the last to bathe in the annual family bath.

The Meaning Of ‘Break The Ice’

It seems that ‘break the ice’ is one of the very few Shakespeare phrases to become everyday idioms that did not begin as something literal. We can imagine images like a fisherman having to break the ice in a river to gain access to the fish, or an icebreaker vessel cutting through the ice to create a pathway through it and such an image becoming a metaphor. That’s usually how idioms are born and develop. It was only centuries later that the boats used to plough through Arctic seas to clear the path for shipping became known as ‘icebreakers.’

‘Break the ice’ began its life as a metaphor. It means to do some small thing that will dispel the awkwardness of a situation before the real business of that situation begins. For example, arriving at a reception and being handed a glass of champagne to oil conversation; it can mean meeting someone for the first time about a matter of business and making small talk about the weather etc; it can mean the first speaker at a conference, welcoming participants and telling a joke and making them laugh, easing the way for the real business of the conference – in fact, anything that will ease people into relating to someone or acting in a situation they are encountering for the first time and needing a warm-up.

‘Break The Ice’ – The First Appearance

‘Break the ice’ as a metaphor made its first appearance in Shakespeare’s The Taming of the Shrew (Act 1, Scene 2). Shakespeare used it as a term for a social gesture when Tranio, in talking about the problem of wooing the ice cold Katherine, says:

If it be so, sir, that you are the man
Must stead us all, and me amongst the rest,
And if you break the ice and do this feat,
Achieve the elder, set the younger free
For our access, whose hap shall be to have her
Will not so graceless be to be ingrate.

He is suggesting approaching her by getting to know her father first, which will break the ice. Being Shakespeare, though, and never letting us off with a single meaning, he is also talking about cracking the ice cold demeanour of the feisty Katherine.

Another Early Use Of ‘Break The Ice’

The term appears a few years later, possibly independently of Shakespeare’s reference, in a poem, Hudibras, by Samuel Butler the 17th Century poet and novelist. The poem is a satire on the Cromwellians and also the Presbyterian church. A character has a first meeting with another, stares at him and finally speaks first:

‘Breaking the ice’ as a metaphor made its first appearance in a poem, Hudibras, by Samuel Butler the 17th Century poet and novelist. The poem is a satire on the Cromwellians and also the Presbyterian church. A character has a first meeting with another, stares at him and finally speaks first:

‘The orator we nam’d of late,
Less troubled with the pangs of State
Than with his own impatience,
To give himself first audience,
After he had a while look’d wise,
At last broke silence, and the ice.
Quoth he, There’s nothing makes me doubt
Our last out-goings brought about,
More than to see the characters
Of real jealousies and fears…’

How break the ice is unusual as an idiom

The term ‘break the ice’ has not undergone the usual path that most idioms have. It was used in the Shakespeare play and the Butler four hundred years ago in exactly the metaphorical way it is used in our everyday speech today. 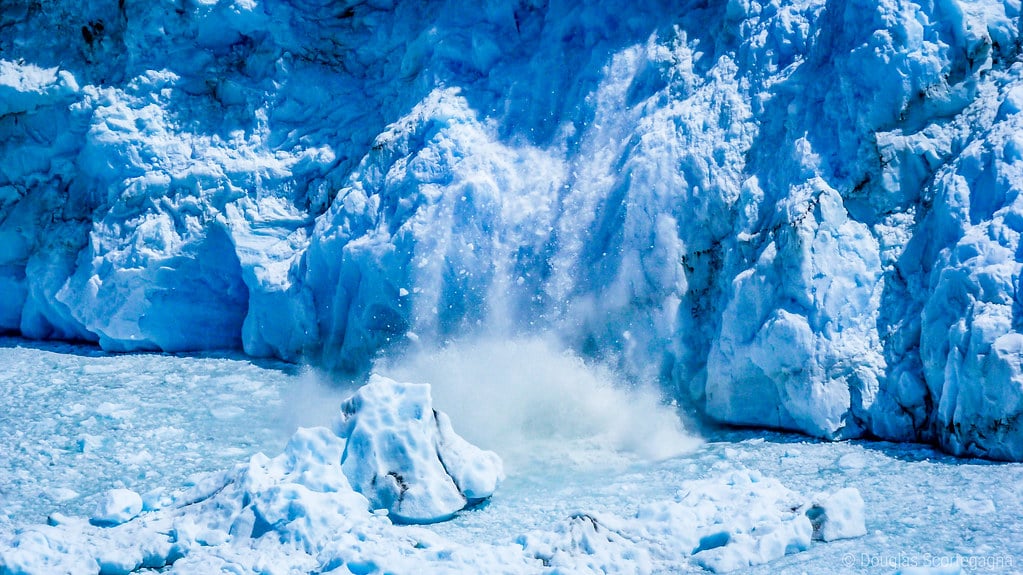 The non-metaphorical breaking ice at Petito Merino glacier in Patagonia.