“Sea change” is a phrase in a Shakespeare play with the most beautiful of Shakespeare’s poetry. It’s from a song sung by Ariel in The Tempest.

“Full fathom five thy father lies,
Of his bones are coral made,
Those are pearls that were his eyes,
Nothing of him that doth fade,
But doth suffer a sea change,
into something rich and strange,
Sea-nymphs hourly ring his knell,
Ding-dong.
Hark! now I hear them, ding-dong, bell.”

The meaning of ‘sea change’

The meaning has evolved into something much more than its original meaning, which referred to something being literally changed by the sea – something like the polishing of beach pebbles, turning them from their original state into something smooth and beautiful.

In ‘The Tempest’, the young prince, Ferdinand has been shipwrecked, together with a group of European politicians, including his father, the king of Naples. He is washed up on a magical island and separated from the others. He believes that his father has been drowned. The spirit Ariel, is invisible to him but he hears his song, apparently hanging in the air. In the song Ariel is singing about Ferdinand’s father having been transformed into something rich and strange by his immersion in the sea – his bones have become coral and his eyes have become pearls.

The idea of a change brought about by being immersed in water is central to the meaning of the play, which is about redemption and forgiveness. The European politicians have landed on the island and have suffered no harm. Indeed, their clothes, drenched in the sea, are now in the same state as they were in when they were new.

It is a Christian idea, referring to baptism, in which immersion in water washes one’s sins away. The politicians have done a great injustice to Prospero, and he has now brought them, through magic, to the island, where he puts them through some experiences and then forgives them.

Sea change, in the play therefore means changing someone from being covered in sin to being cleansed, and in that sense changed into something rare and precious, their sins forgiven, by a kind of baptism in the sea. 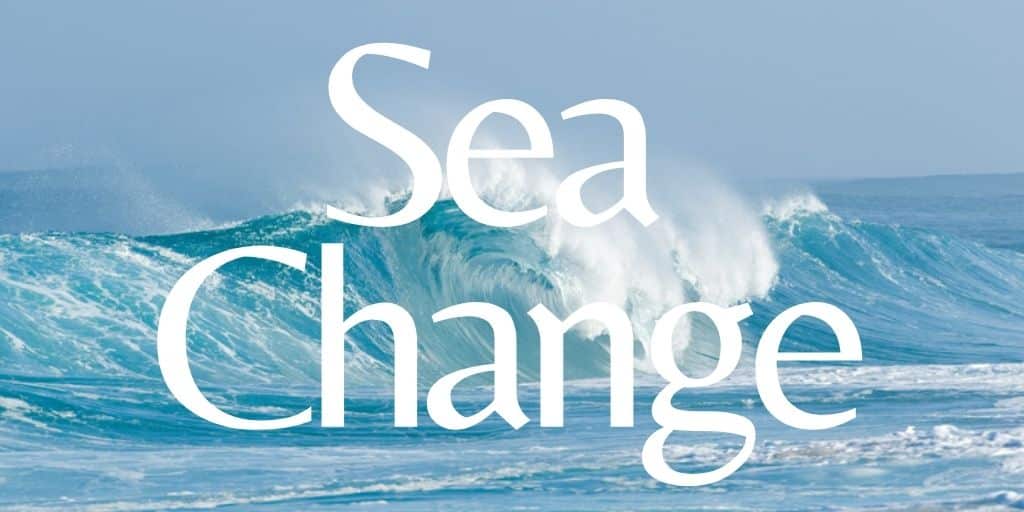 How the meaning of ‘sea change’ has changed

The term ‘sea change’ is not used in that literal way these days, meaning a change brought about by the sea. Although the English language has kept that beautiful image, it now means anything that has undergone a complete reversal or transformation, a radical change of direction in attitude, in goals, government, business, culture and so on.

For example, this sentence: “The Covid pandemic has brought about a sea change in the way the country conducts its social life.”

That has nothing to do with the sea but it is the way we use the term now. That is the valid way of using it. But, unfortunately, it is so frequently used that it has become a cliché.  We talk about any change as a ‘sea change’ now so it is beginning to lose its meaning – a radical change – and therefore its impact. One can now say it without being struck by its beauty. Going back to the song in The Tempest is the only way of enjoying it as a beautiful phrase in a song by William Shakespeare.