‘What Dreams May Come’, Meaning & Context

What Dreams May Come is one of the most famous films of the 1990s, based on the novel of the same title by Richard Matheson. It stars Robin Williams as a man who dies and finds himself in the afterlife. It is one of the hundreds of films, novels, poems, and plays that use lines from Shakespeare as their titles. Some other famous examples are the Ray Bradbury novel Something Wicked This Way Comes, the Aldous Huxley novel Brave New World and Under the Greenwood Tree by Thomas Hardy. All of those have been adapted for the screen, with the same titles.

‘What dreams may come’ is an apt title for a film or novel dealing with life after death as it comes from Shakespeare’s most famous soliloquy, ‘To be or not to be,’ from his most famous play, Hamlet, in which Hamlet considers life and death, and mulls over what putting an end to it all would mean. The prospect frightens him as thoughts about the possible horrors that would ensue, which he refers to as dreams, fill his imagination. Committing suicide raises questions, focusing on the Christian idea that God has forbidden suicide and that those who ignore this ban will be punished. Hamlet’s vision of the hell that would await him causes him to dispel thoughts of suicide. It is this fear that prevents Hamlet from committing suicide.

Much of the story of Hamlet swings around a Christian idea (see all themes in Hamlet). Hamlet is told by the ghost of his dead father that he was murdered by his brother Claudius. Hamlet therefore has a duty to avenge his father’s death by killing Claudius. However, it occurs to him that the ghost may be something that comes from hell to tempt him into sinning. He finds himself unable to act for fear of that and keeps looking for ways of testing it.

At the end of the play the Christian theme comes to fulfilment when he does nothing, convinced that that is what he has to do  – nothing. ‘Readiness is all,’ he says. He just has to wait while the corruption collapses around him as the plotters and schemes fall into the traps that they have set for him. He dies, however, as a sacrifice, like Christ on the cross, as all the corruption destroys itself, leaving a refreshed and cleansed Denmark. Hamlet’s fear of the afterlife, of the dreams that may come, allows him to keep going and subsequently defeat the corruption all around him.

More comforting than Shakespeare’s pointing to the horrific visions that may come after death is a recent scientific study about end-of-life visions, also referred to as dreams. In that study (End-of-Life Dreams and Visions: A Longitudinal Study of Hospice Patients’ Experiences. Journal of Palliative Medicine, 2014) the researchers interviewed hospice patients who were receiving end of life care about their dreams and their day-dreaming. Far from being terrorised by the kind of dreams Hamlet refers to, their dreams were warm and cosy. They dreamt about their deceased loved ones and their anticipated reunions with them. The closer they moved to death the more prolific those visions became. The researchers’ conclusion was that the dreams were ‘typically comforting, realistic, and often very meaningful,’ unlike Hamlet’s vision of Hell.

The Robin William’s What Dreams May Come film also has a Christian motif.  Chris Neilson finds himself obliged to choose hell over heaven so that he can be with his wife who is in hell and whom he cannot remove. In deciding to join her he is choosing love above any selfish desires he may have, and in doing so, is redeemed and, consequently, both achieve Heaven. 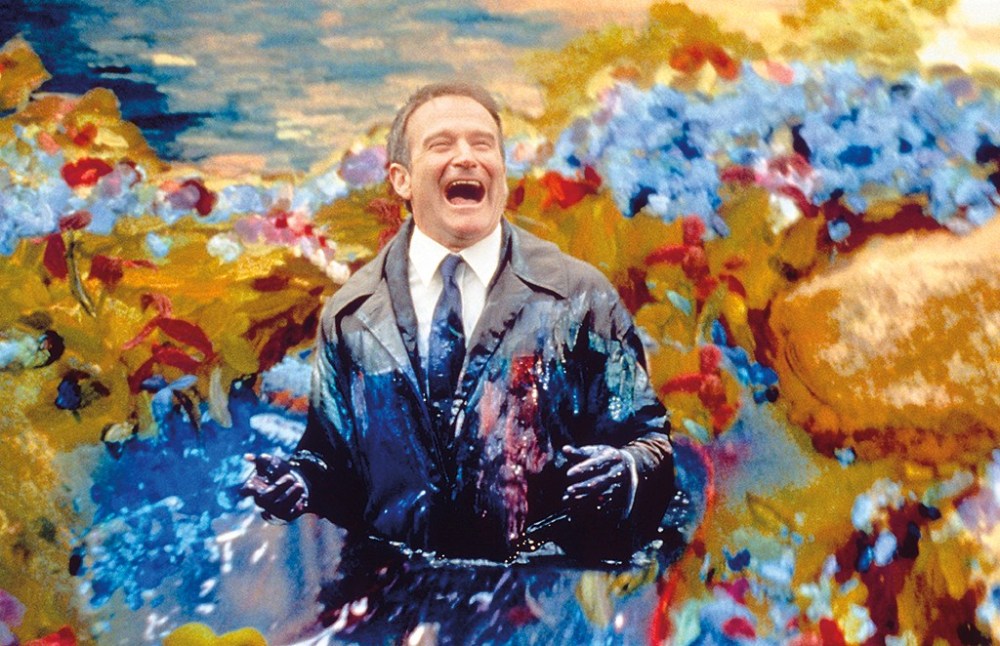 Robin Williams discovers the afterlife in ‘What Dreams May Come’ movie