‘Double double toil and trouble/Fire burn and cauldron bubble‘ is a rhyming couplet from Shakespeare’s play, Macbeth, chanted by the supernatural three witches. It is among the most quoted lines from Shakespeare, mainly because of its sing-song rhythm and its rhyming.

The witches represent pure evil. They are not real characters, and, indeed, they can be seen simply as the voice of temptation in the mind of Macbeth. Shakespeare distinguishes them from the other characters by making them speak in a distinctive way, different from the way that human beings in the play, and in all his other plays, speak. It is almost as though they are talking a different language.

The way Shakespeare does that is to abandon his usual blank verse iambic pentameter and make the witches speak in rhyming couplets, which produces a weird, mesmeric effect, hence the unreal quality of the lines, ‘double double, toil and trouble/Fire burn and cauldron bubble’. Whereas the iambic pentameter is flexible and imitates everyday speech, rhyming couplets are artificial, and nothing like everyday speech. Add to that things like the alliteration of, in this instance, the ‘d’ and ‘t’ sounds, and you get the message Shakespeare is sending.

When Macbeth is at his wits end, sleepless with guilt, hated by everyone, his marriage broken, he goes to find the witches to try and find out how it’s going to end for him. They know he’s coming and Shakespeare gives us a wonderful scene as they prepare a potion for him to drink. They have a steaming cauldron on a fire and they are cooking their ingredients, chanting as they do so:

Round about the cauldron go;
In the poison’d entrails throw.
Toad, that under cold stone
Days and nights has thirty-one
Swelter’d venom sleeping got,
Boil thou first i’ the charmed pot.

Fillet of a fenny snake,
In the cauldron boil and bake;
Eye of newt and toe of frog,
Wool of bat and tongue of dog,
Adder’s fork and blind-worm’s sting,
Lizard’s leg and owlet’s wing,
For a charm of powerful trouble,
Like a hell-broth boil and bubble.

Scale of dragon, tooth of wolf,
Witches’ mummy, maw and gulf
Of the ravin’d salt-sea shark,
Root of hemlock digg’d i’ the dark,
Liver of blaspheming Jew,
Gall of goat, and slips of yew
Silver’d in the moon’s eclipse,
Nose of Turk and Tartar’s lips,
Finger of birth-strangled babe
Ditch-deliver’d by a drab,
Make the gruel thick and slab:
Add thereto a tiger’s chaudron,
For the ingredients of our cauldron.

Cool it with a baboon’s blood,

Then the charm is firm and good. 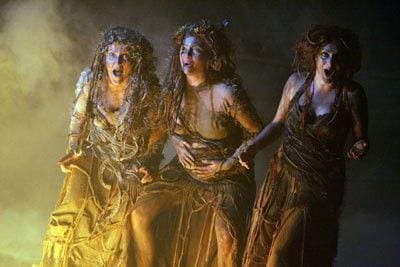 Elizabethan audiences loved theatrical effects. They did not have the thousands of distractions and the variety of entertainment outlets that we have today. There were some sports, like bearbaiting and cock fighting, but culturally, there was only the theatre, which had to offer all the things that we get today from hundreds of different places.

London had more than twenty theatres, all full to overflowing every day, and groups of actors toured the market towns and great houses of England, always bringing in huge audiences. Performances were expected to satisfy the audiences’ desire for depictions of violence, sex, war, death, love, and all the things that people experience in their lives, but heightened in the scenes performed on the stage.

The witches in Macbeth are brilliant examples of a playwright offering audiences what they most wanted to see – theatrical scenes raised above their daily humdrum lives. In Macbeth Shakespeare offers everything – extreme violence, sex, war, death – and brings the idea of evil on to the stage in the form of the three witches.

In the play the king, Duncan’s, favourite officer, Macbeth, a loyal and brave soldier, and hero of the people, subconsciously harbours the idea that he has the qualities to be king. Shakespeare brings in these characters, the three witches, specifically to raise that desire to the surface of his mind so that he will indeed be tempted to try and become king. Their intent is to create social disruption and to destroy him.

They accost him as he returns from battle and tell him that he will be king one day. It is at that point that Macbeth begins to think about it, and what he must do if he wants to bring it about. He tells his wife, Lady Macbeth, about the witches, and together they plan to kill the king, and they do it. From that point on the pair begin to decline. Lady Macbeth goes crazy and Macbeth descends into the hell of tyranny, killing everyone who opposes him, and in so doing, destroys himself, just as the witches have intended.