“Hand to mouth” is an idiom that has been in use at least since the 1600s, and became more common in the 1930s during The Great Depression, when many people lived lives of deprivation.

This is one of the few idioms on our list that actually has nothing to do with Shakespeare, with nothing close appearing anywhere in his works.

Meaning of “Hand To Mouth”

An idiom is a group of words that has a figurative meaning, but which usually originated from a literal idea – in this case, living like wild animals, where food is usually consumed immediately when it is found, with little in the way of preservation.

“Hand to mouth” was used quite literally during a period of famine in Britain. At that time, there was so little food that whenever people found some form of sustenance, it went straight from their hands to their mouths as they didn’t dare save it for later in case they lost it. 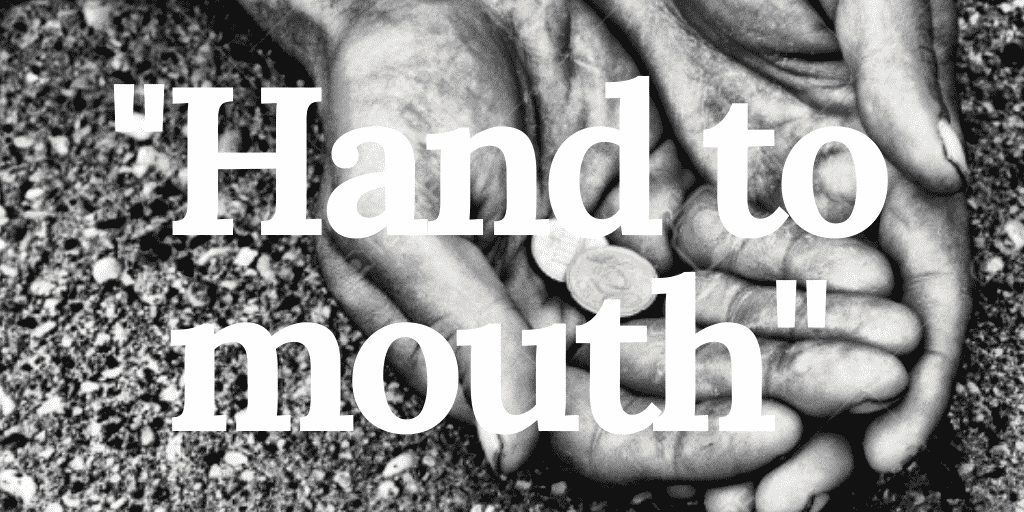 “Hand to mouth”; a popular idiom in arts & literature

“Hand to Mouth” in Culture

The term “hand to mouth” is very popular among singers and other performers as a title for their works. There are some very famous people among them:

George Michael included the song “Hand to Mouth” in his debut solo album “Faith.” It begins:

Harold Lloyd’s 1919 film From Hand to Mouth is a 1919 American comedy silent film. This was the first film Lloyd made with frequent co-star (and future wife) Mildred Davis A print of the film survives in the film archive of the British Film Institute.

Linda Tirado’s 2014 book, Hand to Mouth: Living in Bootstrap America attempts to answer many questions that middle and upper-class people have about the working poor, such as why they eat junk food, have so many kids, smoke, drink and do drugs. Tirado states that all the answers to these questions relate to a simple lack of money—for example, minimum wage and no benefits results in long shifts and constant commuting, which results in fast food consumption being the only viable option.

The Wider Use of “Hand to Mouth” in the Press

More than half of young Britons are living “hand to mouth”, according to a new survey.

The family lived hand to mouth and there were days when Ilangavon and his younger brother had gone to bed hungry.

… he said: “We have to pay Cumbernauld to use their facilities – we really are living hand to mouth and if we didn’t have such a good president in Neil Anderson, I don’t know what we would have done.” The Kirkintilloch Herald

So there is no hope that starving today will feed you tomorrow. In this recovery from the Great Recession, almost half of America is living hand to mouth.