Read our selection of the very best quotes from Edward III, along with speaker, act and scene. As with so many of his plays Shakespeare brings the characters to life with memorable dialogue and some fantastic quotes. Read on below for the most well known Edward III quotes:

The quarrel that I have requires no arms
But these of mine: and these shall meet my foe
In a deep march of penetrable groans;
My eyes shall be my arrows, and my sighs
Shall serve me as the vantage of the wind,
To whirl away my sweetest artillery.
Ah, but, alas, she wins the sun of me,
For that is she herself, and thence it comes
That poets term the wanton warrior blind;
But love hath eyes as judgement to his steps,
Till too much loved glory dazzles them.

What canst thou promise that I cannot break?
Which of these twain is greater infamy,
To disobey thy father or thy self?
Thy word, nor no mans, may exceed his power;
Nor that same man doth never break his word,
That keeps it to the utmost of his power.
The breach of faith dwells in the soul’s consent:
Which if thy self without consent do break.

My self, whose spirit is steel to their dull lead,
What with recalling of the prophecy,
And that our native stones from English arms
Rebel against us, find myself attainted
With strong surprise of weak and yielding fear.

“Our drums strike nothing but discouragement,
Our trumpets sound dishonor and retire;
The spirit of fear, that feareth nought but death,
Cowardly works confusion on it self.

No hope, but death, to bury up our shame.

It is a glorious thing to stablish peace,
And kings approach the nearest unto God
By giving life and safety unto men

Although experience teach us this is true,
That peaceful quietness brings most delight,
When most of all abuses are controlled;
Yet, insomuch it shall be known that we
As well can master our affections
As conquer other by the dint of sword,

Comfort thy self, as I do, gentle Queen,
With hope of sharp, unheard of, dire revenge.
He bids me to provide his funeral,
And so I will; but all the Peers in France
Shall mourners be, and weep out bloody tears,
Until their empty veins be dry and sere:
The pillars of his hearse shall be his bones;
The mould that covers him, their City ashes;
His knell, the groaning cries of dying men;
And, in the stead of tapers on his tomb,
An hundred fifty towers shall burning blaze,
While we bewail our valiant son’s decease.

What Fates impose, that men must needs abide;
It boots not to resist both wind and tide.

For trust not him that hath once broken faith.

What is the body when the head is off?

Are we missing any great Edward III quotes? Let us know in the comments section below. 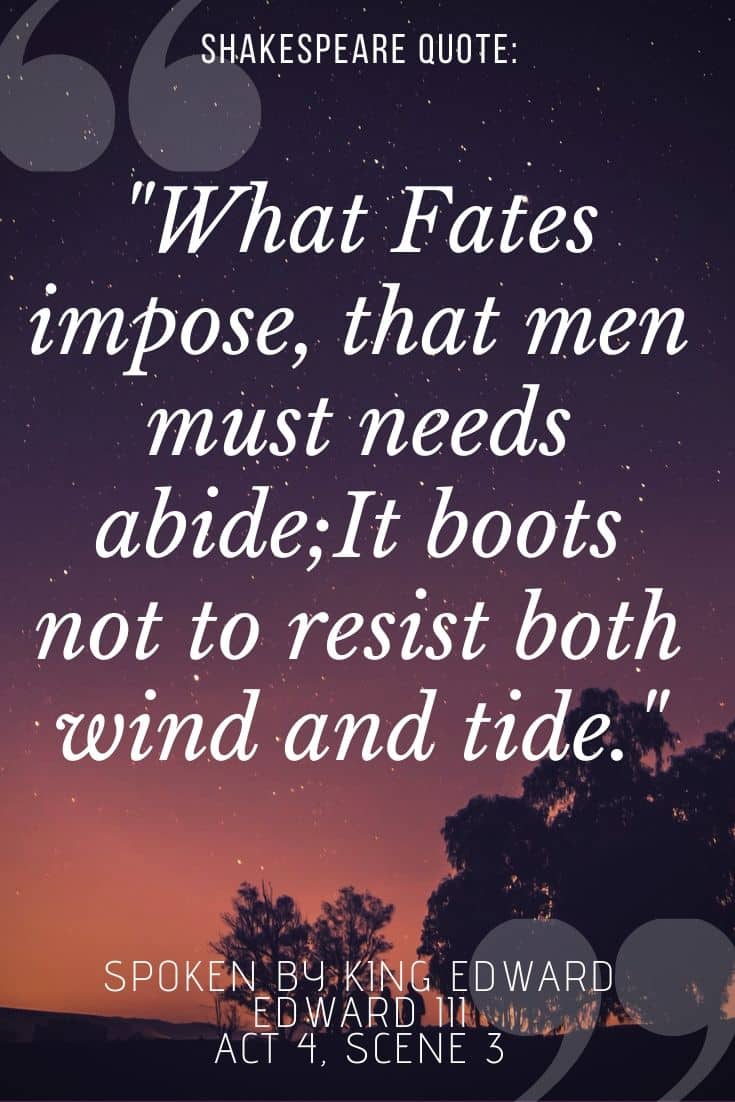