When we’re in need of some wise or inspirational thoughts we often go to William Shakespeare or the writers of the Bible. There is a figure snapping at their heels though, the Athenian teacher, Socrates, often referred to as the wisest man who ever lived.

Socrates (470-399 BCE) was one of the greatest figures of the ancient period of Western philosophy and a legend even in his lifetime. He was the ancient world’s equivalent of a university professor and had a great influence on his students, many of whom became prominent names in Western thought, including the philosopher, Plato and the military leader and historian, Xenaphon. 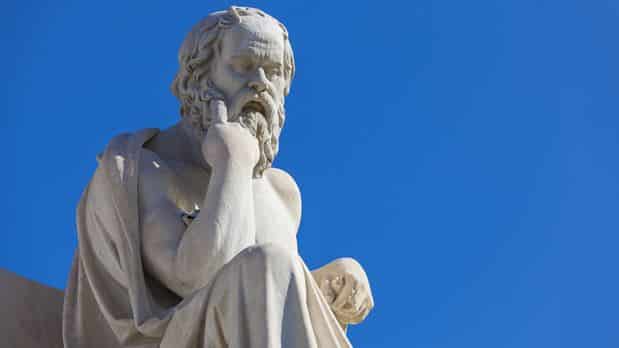 Statue of the great thinker and teacher Socrates

Access to Socrates’ wisdom in the form of writings by him is complicated by the fact that he never wrote anything down, so we have no direct record of the things he thought, or regarded as important enough to record. Instead, we have reports from others – mainly the two students, Plato and Xenaphon.

Neither writer can be entirely relied on, as in all their works about Socrates they rely on memory. It’s also not possible to know how much of their content is made up or incorrectly attributed to Socrates. They both use a technique known as the ‘Socratic dialogue,’ where they create a fictional character called Socrates, who engages in conversations with his students, and it is in that way that they provide insight into Socrates’ thinking, and offer things that he supposedly said.

Xenaphon wrote four books in this way, under the umbrella title Memorabilia. Plato wrote several books, including many consisting entirely of Socratic dialogues; a book, Apology, about the trial of Socrates, which Plato attended; and an account of Socrates’ execution in Phaedro.

It is in the above context that we’ve pulled together 88 of the best Socrates quotes, as presented in the writings of others. They are almost all one-liners, extracted, out of context, from longer passages of dialogue:

The unexamined life is not worth living.

To find yourself, think for yourself.

The only true wisdom is in knowing you know nothing.

Education is the kindling of a flame, not the filling of a vessel.

Be slow to fall into friendship, but when you are in, continue firm and constant.

What I do not know, I do not think I know.

Nothing is to be preferred before justice.

Justice. If only we knew what it was.

He is rich who is content with the least; for contentment is the wealth of nature.

Beware the barrenness of a busy life.

The greatest way to live with honor in this world is to be what we pretend to be.

Our prayers should be for blessings in general, for God knows best what is good for us.

There is only one good, knowledge, and one evil, ignorance.

I cannot teach anybody anything. I can only make them think.

The hour of departure has arrived and we go our ways; I to die, and you to live. Which is better? Only God knows.

I decided that it was not wisdom that enabled poets to write their poetry, but a kind of instinct or inspiration, such as you find in seers and prophets who deliver all their sublime messages without knowing in the least what they mean.

Wonder is the beginning of wisdom.

We cannot live better than in seeking to become better.

The nearest way to glory is to strive to be what you wish to be thought to be.

I only wish that ordinary people had an unlimited capacity for doing harm; then they might have an

If I save my insight, I don’t attend to weakness of eyesight.

In childhood be modest, in youth temperate, in adulthood just, and in old age prudent.

Real wisdom is the property of God, and… human wisdom has little or no value.

No man undertakes a trade he has not learned, even the meanest; yet everyone thinks himself sufficiently qualified for the hardest of all trades, that of government.

I would rather die having spoken after my manner, than speak in your manner and live.

The way to gain a good reputation is to endeavor to be what you desire to appear.

Regard your good name as the richest jewel you can possibly be possessed of – for credit is like fire; when once you have kindled it you may easily preserve it, but if you once extinguish it, you will find it an arduous task to rekindle it again. The way to gain a good reputation is to endeavor to be what you desire to appear.

Remember that there is nothing stable in human affairs; therefore avoid undue elation in prosperity, or undue depression in adversity.Remember what is unbecoming to do is also unbecoming to speak of.

If all misfortunes were laid in one common heap whence everyone must take an equal portion, most people would be contented to take their own and depart.

Once made equal to man, woman becomes his superior.

Be kind, for everyone you meet is fighting a hard battle.

True wisdom comes to each of us when we realize how little we understand about life, ourselves, and the world around us.

Death may be the greatest of all human blessings.

Get not your friends by bare compliments, but by giving them sensible tokens of your love.

If a man is proud of his wealth, he should not be praised until it is known how he employs it.

People demand freedom of speech to make up for the freedom of thought which they avoid.

Mankind is made of two kinds of people: wise people who know they’re fools, and fools who think they are wise.

Whenever, therefore, people are deceived and form opinions wide of the truth, it is clear that the error has slid into their minds through the medium of certain resemblances to that truth.

It is a disgrace to grow old through sheer carelessness before seeing what manner of man you may become by developing your bodily strength and beauty to their highest limit.

The mind is everything; what you think you become.

The shortest and surest way to live with honour in the world, is to be in reality what we would appear to be; and if we observe, we shall find, that all human virtues increase and strengthen themselves by the practice of them.

Think not those faithful who praise all thy words and actions; but those who kindly reprove thy faults.

Envy is the ulcer of the soul.

The only good is knowledge and the only evil is ignorance.

The easiest and noblest way is not to be crushing others, but to be improving yourselves.

False words are not only evil in themselves, but they infect the soul with evil.

Remember, no human condition is ever permanent. Then you will not be overjoyed in good fortune nor too scornful in misfortune.

It is better to change an opinion than to persist in a wrong one.

Get not your friends by bare compliments, but by giving them sensible tokens of your love.

Thou should eat to live; not live to eat.

When the debate is over, slander becomes the tool of the loser.

The hottest love has the coldest end.

Not life, but good life, is to be chiefly valued.

Nature has given us two ears, two eyes, and but one tongue-to the end that we should hear and see more than we speak.

Employ your time in improving yourself by other men’s writings so that you shall come easily by what others have laboured hard for.

From the deepest desires often come the deadliest hate.

A system of morality which is based on relative emotional values is a mere illusion, a thoroughly vulgar conception which has nothing sound in it and nothing true.

The envious person grows lean with the fatness of their neighbor.

Call no man unhappy until he is married.

Let him that would move the world, first move himself.

An education obtained with money is worse than no education at all.

The triumph of my art is in thoroughly examining whether the thought which the mind of the young man brings forth is a false idol or a noble true birth.

Give me beauty in the inward soul; may the outward and the inward man be at one.

Speak, so that I may see you.

How many are the things I can do without!

We gain our first measure of intelligence when we first admit our own ignorance.

And that’s your lot for Socrates quotes. What do you think of the quotes – any we’re missing? Let us know in the comments below! 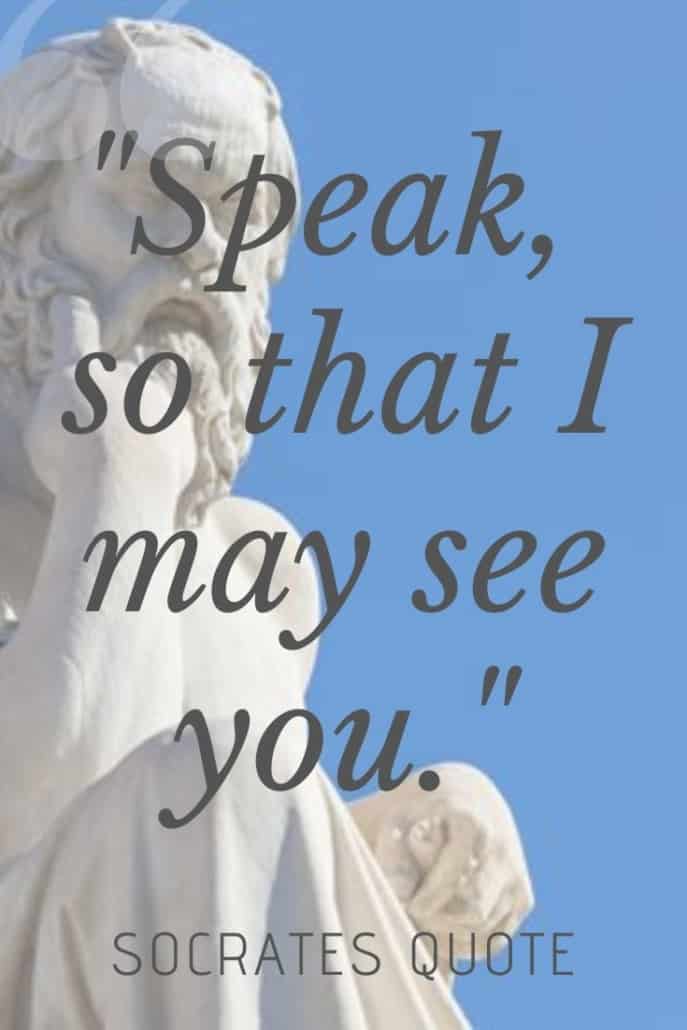