‘It’s Greek To Me’, Meaning & Context

“It’s Greek to me” or “it’s all Greek to me” is an English idiom meaning “I don’t understand it.” That could apply to videos or texts or lectures full of jargon, science, technology, complicated diagrams, dialect, or anything difficult to understand.

“It’s Greek to me” was an idiom, even by Shakespeare’s time, used by ordinary Elizabethans. Shakespeare used the idiom in Julius Caesar (1599). In using the phrase in a play Shakespeare, was using an everyday expression that his audience would have related to.

History of ‘It’s Greek to me’

‘It’s Greek to me’ has a long history as an idiom, and has an interesting origin. The ancient Romans were bilingual. They spoke Latin as an everyday language but the “posh” people used Greek. And then, in the Middle Ages, the use of Greek began to decline and Latin remained as the language of both the educated and the ordinary people. The scribes in the monasteries, working away, making copies of precious books in both ancient languages, began to hand the Greek books to Greek language experts as many young monks couldn’t understand Greek. They would make a note: “Graecum est; non legitur,” which means “This is Greek: it can’t be read.” It would then be copied by an expert.

“Greek” began to mean anything that can’t be understood. In that sense it became an idiom, first in Latin, and then in English, as a direct translation from the Latin. It didn’t have to have something to do with the Greek language, but with anything someone didn’t understand.

‘It’s Greek to me’ in Shakespeare’s Julius Caesar

The phrase ‘It’s Greek to me’ is spoken by Casca in Act 1, Scene 2 of Julis Caesar.

Caesar attends a festival during which he is offered a crown. It is attended by other senators. There are other speakers and the famous orator, Cicero, makes a speech. Some of the senators don’t go into the area where the speeches are being made. Casca does go, and on coming out encounters another senator, Cassius, who questions him about it.

CASSIUS: Did Cicero say anything?

CASSIUS: To what effect?

CASCA: Nay, an I tell you that, I’ll ne’er look you i’ the face again: but those that understood him smiled at one another and shook their heads; but, for mine own part, it was Greek to me.

This is a very important scene because Caesar’s being offered a crown is a last straw in the unease other senators are feeling about his ambition. They are worried that he is going to make himself a king. It is here that the conspiracy to assassinate him begins.

It is typical of Shakespeare that he can hide a joke in a very serious bit of drama. He uses the idiom “it was Greek to me” literally, playing with the idiom, which was well known to the audience, because Cicero was actually speaking in Greek. The audience, knowing that the idiom applies to anything, not only the Greek language, would have roared with laughter in appreciation of the pun. Elizabethan audiences loved puns and Shakespeare used puns a lot. The laughter would have stopped the action, and the actor who spoke the line would have taken a little bow, causing more cheering. 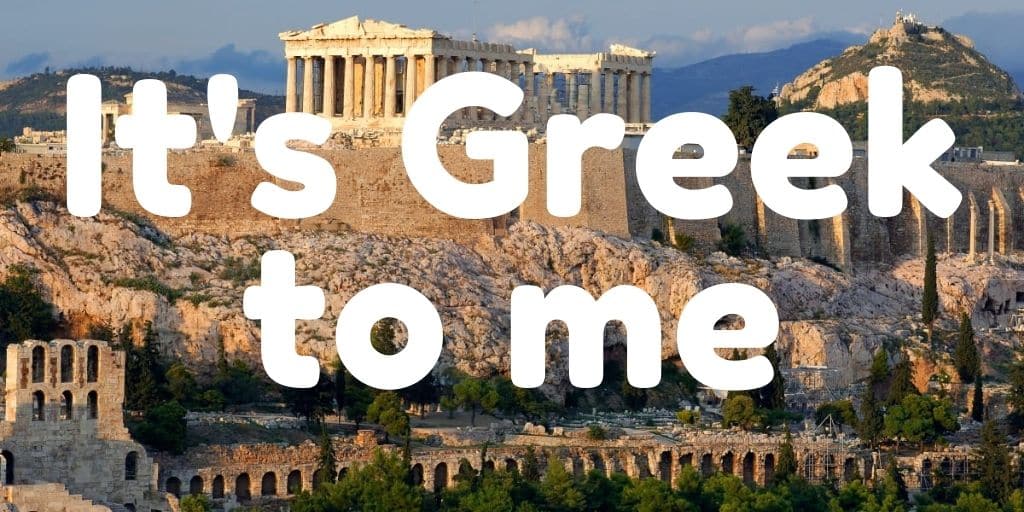 It’s Greek to me…

Non-English alternatives to ‘It’s Greek to me’

Using “it’s Greek to me” to express the inability to understand something has a universal aspect. Although “Greek” is the word used in many languages, sometimes language groups use another word while keeping the basic structure of the idiom intact. For example, the Italians say “it’s all Arabic to me,” and the Danes say “it’s all Russian to me.”

The Poles say “it’s all black magic” to them, but what do the Greeks say? If they can’t make head or tail of something they will say “it’s all Chinese to me.”