Looking for Henry IV Part 1 quotes? Read our selection of the very best quotes from Henry IV Part 1, along with speaker, act and scene. The play is set in early fifteenth-century England during the reign of King Henry IV, and moves rapidly around the country. As with so many of his plays Shakespeare brings the characters to life with some great dialogue and memorable quotes.

Read on below for the most well known Henry IV Part 1 quotes:

In those holy fields,
Over whose acres walked those blessed feet
Which fourteen hundred years ago were nailed
For our advantage on the bitter cross.

So shaken as we are, so wan with care.

A son who is the theme of Honor’s tongue,
Amongst a grove the very straightest plant,
Who is sweet Fortune’s minion and her pride;
Whilst I, by looking on the praise of him,
See riot and dishonor stain the brow
Of my young Harry.

Why, Hal, ’tis my vocation, Hal;
’tis no sin for a man to labor in his vocation.

I know you all, and will awhile uphold
The unyok’d humor of your idleness.

Who doth permit the base contagious clouds
To smother up his beauty from the world,
That, when he please again to be himself,
Being wanted, he may be more wondered at
By breaking through the foul and ugly mists
Of vapors that did seem to strangle him.

Thou art so fat-witted with drinking of old sack and unbuttoning thee after supper and sleeping upon benches in the afternoon, that thou hast forgotten to demand that truly which thou wouldst truly know.

Let us be Diana’s foresters, gentlemen of the shade, minions of the moon.

Yet herein will I imitate the sun,
Who doth permit the base contagious clouds
To smother up his beauty from the world.

By heaven, methinks it were an easy leap,
To pluck bright honour from the pale-faced moon,
Or dive into the bottom of the deep,
Where fathom-line could never touch the ground,
And pluck up drowned honour by the locks.

Speak of Mortimer?
Zounds, I will speak of him, and let my soul
Want mercy if I do not join with him.
Yea, on his part I’ll empty all these veins
And shed my dear blood drop by drop in the dust,
But I will lift the downtrod Mortimer
As high in the air as this unthankful king,
As this ingrate and cankered Bolingbroke.

To put down Richard, that sweet lovely rose,
And plant this thorn, this canker Bolingbroke.

It would be argument for a week, laughter for a month, and a good jest for ever.

I am bewitched with the rogue’s company. If the rascal have not given me medicines to make me love him, I’ll be hanged.

O my good lord, why are you thus alone?
For what offense have I this fortnight been
A banished woman from my Harry’s bed?

There lives not three good men unhanged in England, and one of them is fat and grows old.

That trunk of humours, that bolting-hutch of beastliness, that swollen parcel of dropsies, that huge bombard of sack, that stuffed cloak-bag of guts, that roasted Manningtree ox with the pudding in his belly, that reverend Vice, that grey Iniquity, that father Ruffian, that Vanity in years?

Falstaff: Banish plump Jack, and banish all the world.
Prince Henry: I do, I will.

While you live, tell truth and shame the devil!

Why, so can I, or so can any man,
But will they come when you do call for them?

But thou dost in thy passages of life
Make me believe that thou art only marked
For the hot vengeance and the rod of heaven
To punish my mistreadings.

I will redeem all this on Percy’s head,
And, in the closing of some glorious day,
Be bold to tell you that I am your son,
When I will wear a garment all of blood
And stain my favors in a bloody mask,
Which, washed away, shall scour my shame with it.

He was but as the cuckoo is in June,
Heard, not regarded.

I have more flesh than another man, and therefore more frailty.?

This sickness doth infect
The very life-blood of our enterprise.

Welcome, Sir Walter Blunt, and would to God
You were of our determination.
Some of us love you well, and even those some
Envy your great deservings and good name
Because you are not of our quality
But stand against us like an enemy.

Can Honour set to a leg? No. Or an arm? No.
Or take away the grief of a wound? No.
Honour hath no skill in surgery then? No.
What is Honour? A word.
What is that word ‘honour’? Air.

O, Harry, thou hast robbed me of my youth!

Stay and breathe awhile.
Thou hast redeemed thy lost opinion
And showed thou mak’st some tender of my life
In this fair rescue thou hast brought to me.

Two stars keep not their motion in one sphere.

The better part of valor is discretion.

Thy ignominy sleep with thee in the grave,
But not remembered in thy epitaph!

Thus ever did rebellion find rebuke.

Are we missing any great Henry IV Part 1 quotes? Let us know in the comments section below. 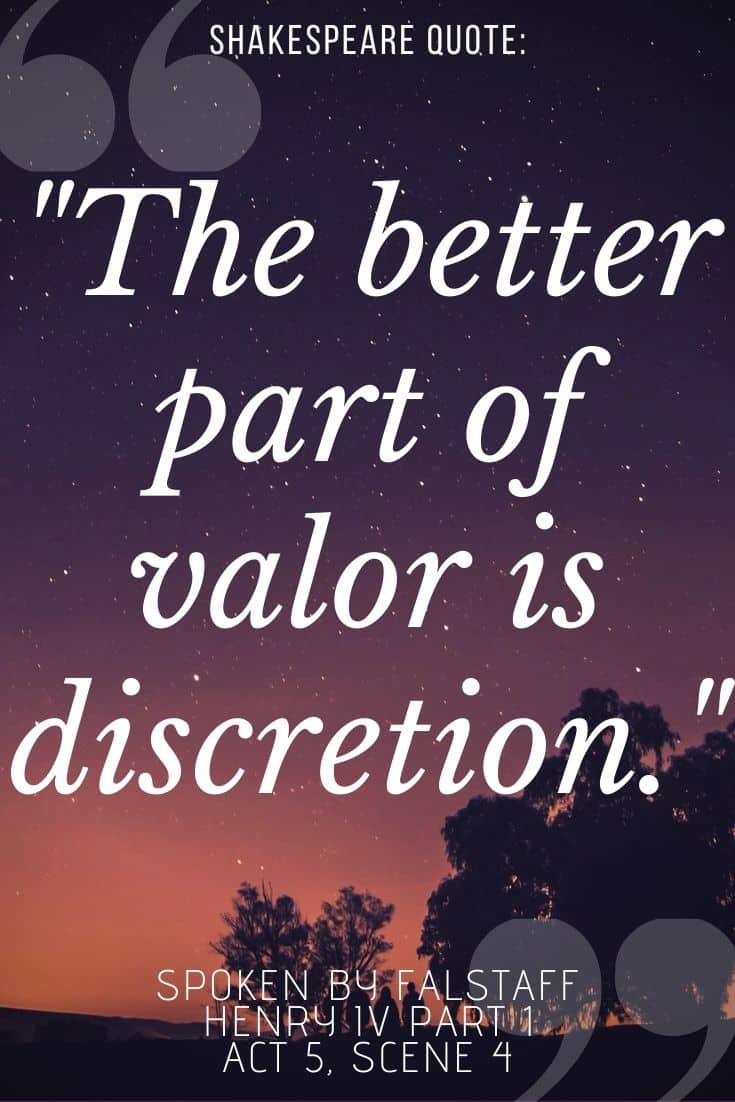