‘Up In Arms’, Meaning & Context

To be “up in arms” means to be angry about something, or to be opposed to something. However, the idiom has undergone a long journey to arrive at that meaning.

Origin of “up in arms”

The original meaning of being “in arms” is to be equipped with weapons and armour. Being “up in arms” is the same thing. The phrase did not originate in a Shakespeare play or poem, although Shakespeare used it in two of his plays:

“March on, march on, since we are up in arms
If not to fight with foreign enemies…”

The princely Warwick, and the Nevils all,
Whose dreadful swords were never drawn in vain,
As hating thee, are rising up in arms:
And now the house of York, thrust from the crown

The first known use of ‘up in arms’ in print is in Arthur Golding’s translation of Lyfe of Shatilion, 1576: “The Protestantes that were up in armes in other places.”

There is nothing metaphorical in either of those two sources – they are both literal, meaning to be armed and ready for battle. 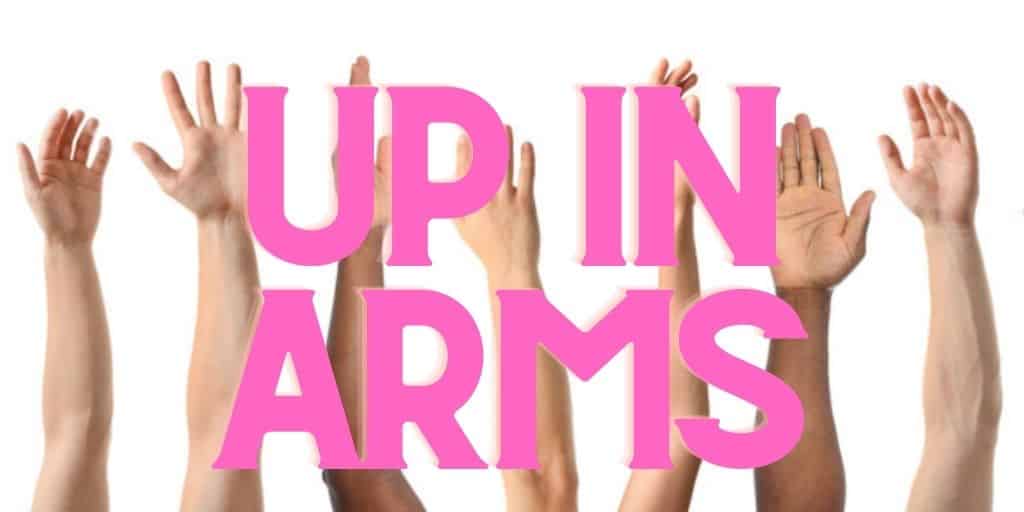 ‘Up in arms’ – a phrase popularised by Shakespeare

We use the word “arm” to refer to weapons. We are more likely to say, “the thieves were armed” than to say “the thieves had weapons.” It’s not clear how it came about that a part of the body – the arms – became the word for weapons, and the verb “to arm” became the practice of carrying weapons.

It may be that in the early days of weaponry the arm – drawing back a string on a bow, or striking with a club or throwing a spear – was the part of the body that did those things and so “arm” was a shortcut word that eventually came to refer to weapons.

From that we get the word “armour.” Armour is a form of defensive weaponry – the protective outfit worn by a fighter.

The way a knight dressed for battle – his style and decorations – is how he was distinguished from all the other knights. This was important because when a knight was captured it was a way of identifying him so that his ransom value could be calculated.

A family Coat of Arms was actually a literal coat, a battle coat bearing the decorations that the family had chosen to advertise themselves. Families still have coats of arms today, which they display on their stationery and official documents etc. but they don’t wear them now, as they are not articles of clothing anymore.

The use of the idiom “up in arms” meaning being angry

There are numerous expressions in English that refer to ‘arms’, such as ‘man at arms’, ‘firearms’, ‘to arms!’, ‘bear arms’, ‘arm up,’ and ‘up in arms.’ They all indicate that a fighter wasn’t just equipped for a fight, he was up, on his feet and ready for battle.

And somehow, what was a literal description of a knight ready for battle developed into the metaphorical phrase “up in arms.,” which means something quite different. The way we use “up in arms” today is illustrated in the following sentences:

“My grandfather was up in arms when they decided to build a block of flats on his allotment.”

“We are all up in arms about the proposed closure of our public library.”

“The workforce is up in arms about the pay cut and are determined to go on strike.”

Other idioms referring to parts of the body

There are hundreds of idioms referring to human behaviour that include parts of the body, especially arms, hands, and fingers. Here are some of the most common: