When confronted with the question, ‘where did this idiom come from?’ applied to any idiom – such as ‘count your blessings’ – our minds normally spring to Shakespeare. If any phrase like this were in a quiz and we guessed Shakespeare as its source we would often be right.

But in the case of ‘count your blessings’ we would be wrong. And indeed, one wonders what answer the quiz leader would accept because in spite of its widespread common use it’s one of those sayings where we have no idea of its origin, in precisely that wording, as an idiom.

Shakespeare does not actually use the phrase ‘count your blessings’. The closest we can come to it in a Shakespeare text is in Henry VI Part 2 where King Henry prays in act 1, scene 1.

O Lord, that lends me life,
Lend me a heart replete with thankfulness!
For thou hast given me in this beauteous face
A world of earthly blessings to my soul,
If sympathy of love unite our thoughts.

Nowhere near the idiom, or even the concept of counting one’s blessings.

‘Count your blessings’ is a phrase that has been used in hymns, notably one by Oatman and Excell, 1897:

When upon life’s billows you are tempest tossed,
When you are discouraged, thinking all is lost,
Count your man y blessings one by one,
And it will surprise you what the Lord has done.

It was used in a poem a decade before that by John Charles Earle. But even by then, it was wide spread enough for it to be quoted in those two examples. And it became a major hit song by George Formby in 1940:

‘Count your blessings’ in the Bible

Even though the origin of the actual phrase may be obscure the idea of counting your blessings originates in Judaic teachings.

The blessing is an ancient concept, rooted in the stories of the Old Testament. It goes right back to Genesis where Isaac, wanting to bless his elder son, Esau, sends for him but Jacob’s mother, Rebekah, overhearing that, disguises Jacob so that the blind Isaac will think he is blessing his firstborn.

So a blessing was originally a ritual in which a dying man passed the baton on to his heir – his eldest son – who got his lands and property and flocks and concubines, in fact, everything, which he would, in turn, pass on to his first own son with his blessing.

The blessing later became associated with God. As Judaism developed God became regarded as a father. And as a father one of his attributes was that, like Isaac, he could bestow blessings on his children. And, evolving further, blessings came to be regarded as all the good things God gave you. That idea was taken up in the New Testament, emphasized by Jesus’ Sermon on the Mount, in which he enumerated all those who are worthy of being blessed, by beginning each condition with “blessed are…”

And blessings became a Christian thing. Christians ask God’s blessing on the meals they are about to eat, on visitors, on a congregation at the end of a church service, on a dead person at a funeral and so on. God, the father of all Christians, can bless anyone and anything.

What about the counting of blessings?

So much for the blessing. But what about the counting of blessings?

That’s also Judaic teaching. The idea comes from a verse in the Talmud, in the book of Deuteronomy “now Israel, what does God, your God, ask of you? The Hebrew word for “what” (mah) is similar to the word for 100 (meah) and somewhere along the line there was some confusion so the text has been made to mean “now Israel, a hundred does God, your God as of you.” That has become the tradition.

During the reign of King David there was a pandemic that took the lives of a hundred people each day. The rabbis took that as a message from God and responded by introducing the practice of reciting a hundred blessings every day. That immediately ended the pandemic. 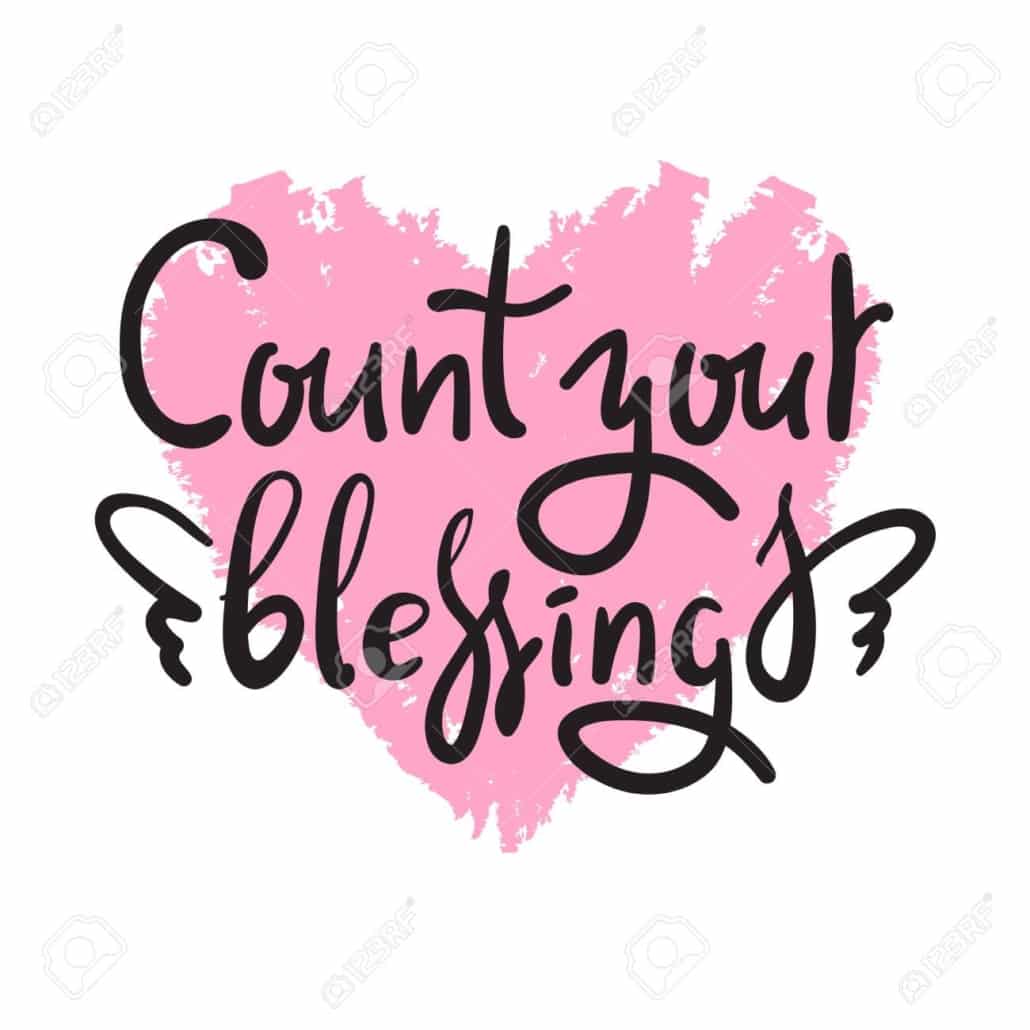 Remember to count your blessings!

Whether the areas we’ve discussed relate to the true origin of the idea of counting one’s blessings or not is not clear, but other than that, one would have to give up on it. And where the phrase originated is also obscure.