‘Practise What You Preach’, Meaning & Context

When confronted with an English idiom- such as ‘practice what you preach’ – one is encountering a phrase that has a good chance of having been coined by either one of the Bible writers or William Shakespeare.

In the case of ‘practice what you preach’ it is not from Shakespeare. Whether it originated with a Bible writer is not quite clear cut, but the phrase certainly does appear in the Bible and never appears in Shakespeare.

‘Practice what you preach’ is usually spoken as a retort to someone who is being hypocritical, who is telling people how they should behave while not themselves behaving in that way.

Shakespeare’s characters frequently talk about hypocrisy and in Hamlet Ophelia comes close to telling her brother, Laertes, to practice what he preaches, in so many words, when he lectures her on how she should behave. She says:

“I shall the effect of this good lesson keep
As watchman to my heart. But, good my brother,
Do not, as some ungracious pastors do,
Show me the steep and thorny way to heaven
Whiles, like a puffed and reckless libertine,
Himself the primrose path of dalliance treads
And recks not his own rede.”

The saying is most clearly stated in the Bible in Matthew 23:3:

“So do and observe whatever they tell you, but not the works they do. For they preach, but do not practice.”

This is Jesus speaking. He is teaching about legalism. Giving instructions to someone else which we are not willing or able to follow makes us hypocrites. One of Jesus’ main themes about the civil and religious life of his time was the curse of hypocrisy throughout society, and he talks about it a lot, but it is here that he uses the language of practicing what you are preaching (as translated into English).

Platus’ use of ‘Practice what you preach’

But the first expression of the saying came two centuries before Matthew in the works of the Roman playwright, Titus Maccius Plautus. ‘Practice yourself what you preach’ appears in the comedy, Asinaria, Act 3, Scene 3.

Plautus wrote more than fifty plays, mostly adapted from works by Greek playwrights, which he reworked to appeal to Roman audiences. Twenty of them have survived. The texts of Plautus’ plays were studied and copied out by Shakespeare when he was at school. Later, when he was writing plays in London, he harked back to what many of the writers he had encountered in school. For example, The Comedy of Errors combines the plots of two of Plautus’ plays.

Plautus’ influence on Shakespeare goes further than the use of his plots. It goes right to the language of his texts. He was similar to Shakespeare in his ability to find exactly the right words to express the situations we encounter in life.

Here are some of those phrases, which we can trace through several works of literature, transformed into expressions that we use every day:

Better do nothing than do ill.

Fire is next akin to smoke.

Those, who twit others with their faults, should look at home.

To love is human, it is also human to forgive.

You will stir up the hornets.

They call me mad, while they are all mad themselves.

He who would eat the kernel, must crack the shell.

If you strike the goads with your fists, your hands suffer most.

He whom the gods love dies young.

If you speak insults you will hear them also.

Patience is the best remedy for every trouble.

The day, water, sun, moon, night – I do not have to purchase these things with money.

Speak no evil of an absent friend.

How often the highest talent lurks in obscurity.

‘Practise what you preach’ in other literature

Hypocrisy is one of the worst human characteristics and exhorting hypocrites to look to themselves before condemning others is a major theme through Western literature. Other writers have expressed the same idea- to practice what you preach –  through the centuries. For example:

The best brought-up children are those who have seen their parents as they are. Hypocrisy is not the parents’ first duty.

She heard the snuffle of hypocrisy in her prayer. She had to cease to pray.

The most exhausting thing in life is being insincere.

I want that glib and oily art
To speak and purpose not.

There are hundreds more, all of which can be traced through other works of literature, to a phrase that we use today. For example, back to Plautus: ‘Patience is the best remedy for every trouble’ is usually expressed today as ‘patience is a virtue’ and ‘Fire is next akin to smoke’ is expressed as ‘there is no smoke without a fire.’ 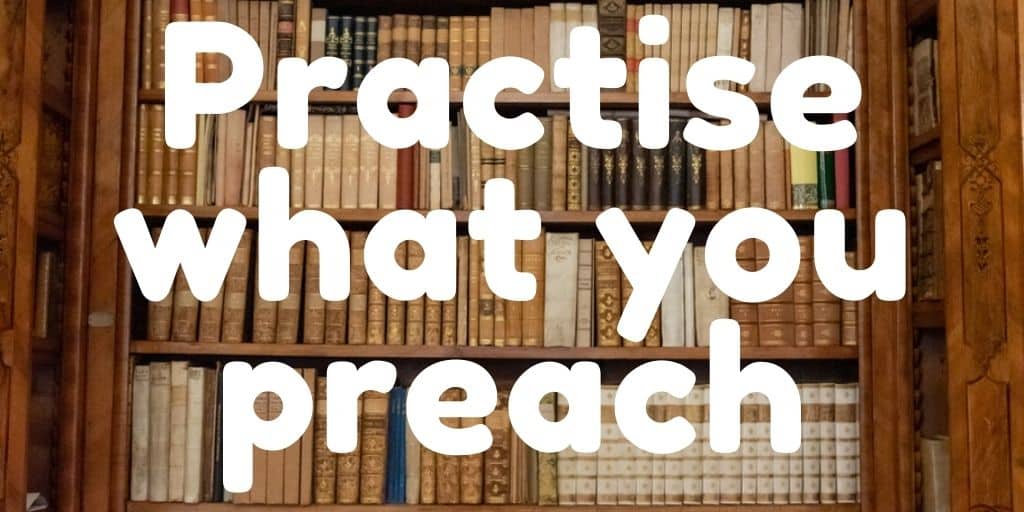 ‘Practise what you preach’