“Break a leg” is an idiom theatre people use as an expression to wish actors good luck for their performances and auditions.

Origin of Break a leg

This is one of the most difficult of all idioms to trace back to its origin and is therefore known as a “dead metaphor.” However, there are plenty of theories about how it came to be an expression of support for acting performances and the best that can be done is to take your pick of them.

Many idioms are derived from a superstition of some kind

In the case of “break a leg,” the Irish nationalist writer, Robert Wilson Lynd published an article, “A Defence of Superstition”, in the 1 October 1921 edition of The New Statesman. He asserted that in horse racing wishing a man good luck was unlucky and you should therefore say something insulting as a way of wishing him luck – such as “may you break a leg.” The idea that wishing someone good luck is in fact unlucky may be a forgotten superstition, he claimed, and that the idiom, used in horse racing may have been transferred to the theatre. 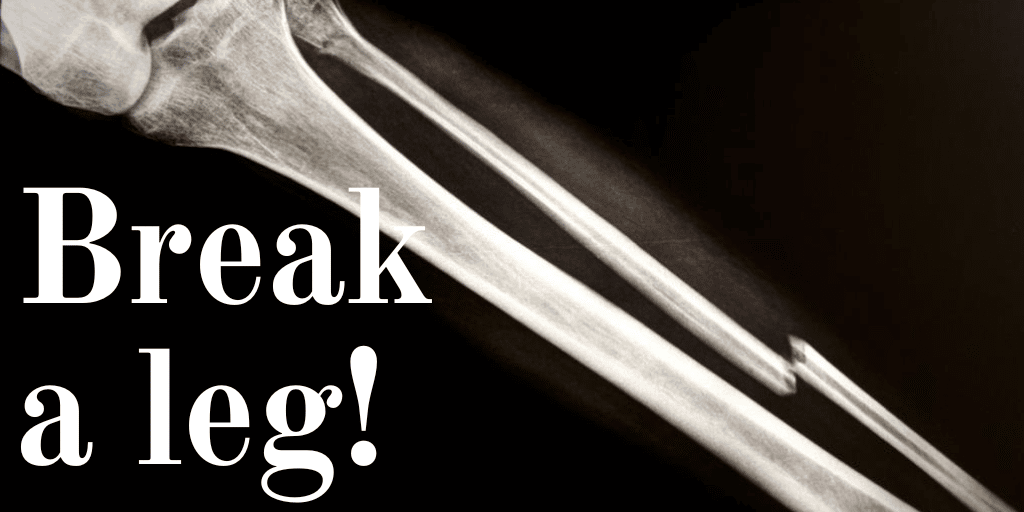 Other superstitions among theatre people

Saying “good luck” isn’t the only superstition in the theatre. Other common superstitions include:

“Break a leg” as book titles

Lise Friedman, writer about ballet, has written one about acting. In Break a Leg she teaches young actors everything they need to know about stagecraft, acting and other aspects of performances.

Jenny Landreth has written the story of amateur dramatics in Britain in her book, Break a Leg. It is a mixture of memoir, social history, interviews, and her own manifesto. She displays a vibrant world that is a crucial part of our culture.

Common synonyms for “break a leg”

You don’t need to say “break a leg” to wish actors good luck. All expressions of good luck are acceptable. Some of them are: