The use of the term ‘heart of gold’ is in common usage today, having been first used in Shakespeare’s play, Henry V.

Shakespeare’s use of ‘heart of gold’ phrase

On the eve of the Battle of Agincourt King Henry disguises himself as an ordinary soldier and wanders around under cover of the dark to chat with the soldiers and find out what their morale is like. When he asks Pistol if he considers himself a better man than the king, Pistol says, “The king’s a bawcock, and a heart of gold, a lad of life, an imp of fame …” (Act 4, Scene 1), suggesting that he admires the king.

Meaning of the phrase ‘heart of gold’

Gold is the most valuable of all the metals. It is also pure, and beautiful to look at. It is, therefore, a powerful metaphor when used to refer to someone’s motives or true worth. The human heart is no more than a pump that sends blood around the body to supply all the organs with the oxygen that keeps us alive, but ‘heart’ is used as a metaphor to refer to more abstract things. In ancient times the heart was thought to be the seat of the emotions and we still use it in that metaphorical sense – to indicate, things like the source of love, mainly, or generosity. It also indicates courage and willingness to do something bold (“I didn’t have the heart to do it”). Images of the heart are closely associated with romantic love, and at times like St Valentine’s Day the newsagents’ shelves are stacked with cards bearing images of hearts.

The word ‘heart’ in the metaphorical sense is also widely used to refer to inner worth – for example, soldiers having ‘hearts of oak,’ using the hardness and strength of oak to describe the courage and unswerving determination of the soldiers. Or someone can be ‘faint-hearted’ or ‘strong-hearted.’ The term ‘Take heart’ is an exhortation to courageous behaviour.

When those two metaphors – the heart and the metal, gold – are put together, it is a perfect way of describing the deeply rooted, inner quality of purity regarding a person.

As usual, this phrase has undergone the same process as some of our most useful and frequently used idioms in that it can be traced back to something one of Shakespeare’s characters said – not to make a big point, but quite casually, and that phrase being so perfect, is then taken up in the language to express the same idea that the speaker was expressing. 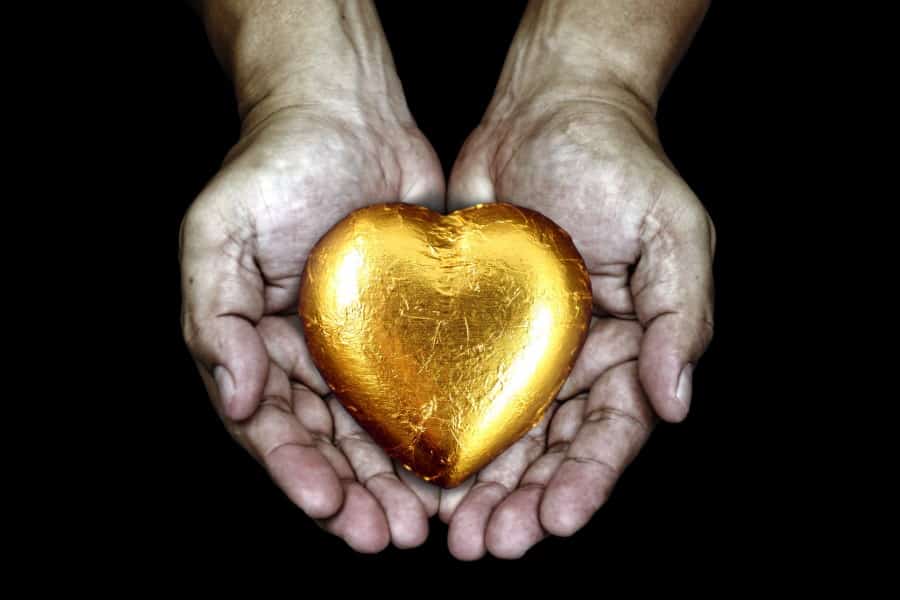 A heart of gold, held in a pair of hands