“Strange bedfellows” is a phrase coined by Shakespeare. Its full context is “Misery acquaints a man with strange bedfellows.” It has come to mean finding oneself in a difficult situation forces one to associate with a condition or person (or persons) that they would not normally have anything to do with.

The phrase first appeared in The Tempest (Act 2, Scene 2).  The King of Naples’ ship has been wrecked of a remote island and all the passengers and crew have been cast into the sea. The king’s jester, Trinculo, has been washed up on the island, where the weather is still stormy.

Meanwhile, Caliban, one of the inhabitants of the island, the malformed son of a late witch has crawled under his cloak to hide from the wrath of his mater because he is late in finishing his work. Trinculo sees the cloak and decides to crawl under it. He is put off by the legs emerging from the bottom of the cloak and the terrible smell of whatever it is under the cloak but decides to go ahead because he desperately needs shelter. As he is doing so, he says:

“Here’s neither bush nor shrub, to bear off any weather at all, and another storm brewing; I hear it sing i’ the wind: yond same black cloud, yond huge one, looks like a foul bombard that would shed his liquor. If it should thunder as it did before, I know not where to hide my head: yond same cloud cannot choose but fall by pailfuls. What have we here? a man or a fish? dead or alive? A fish: he smells like a fish; a very ancient and fish-like smell; a kind of not of the newest Poor-John. A strange fish! Were I in England now, as once I was, and had but this fish painted, not a holiday fool there but would give a piece of silver: there would this monster make a man; any strange beast there makes a man: when they will not give a doit to relieve a lame beggar, they will lazy out ten to see a dead Indian. Legged like a man and his fins like arms! Warm o’ my troth! I do now let loose my opinion; hold it no longer: this is no fish, but an islander, that hath lately suffered by a thunderbolt. [Thunder] Alas, the storm is come again! my best way is to creep under his gaberdine; there is no other shelter hereabouts: misery acquaints a man with strange bed-fellows. I will here shroud till the dregs of the storm be past.”

Evolution of the idiom “strange bedfellows”

Shakespeare uses the phrase literally, in that Triculo is more or less literally crawling into bed with some strange, unknown, unusual thing. He usually shares accommodation and sleeping arrangements with the other servants of the king, such as Stephano, the butler, who has also been washed up on the island, and who will discover him under Caliban’s cloak soon.

The term is not now used to mean the literal sharing of a bed but used metaphorically, usually to do with politics. For example, attempts to form a government after an election parties often have to form coalitions. Sometimes two major parties are very far apart in every way but, in order to provide a government they explore any common ground they may have and agree to work together. In such a case one may say they are “strange bedfellows.” 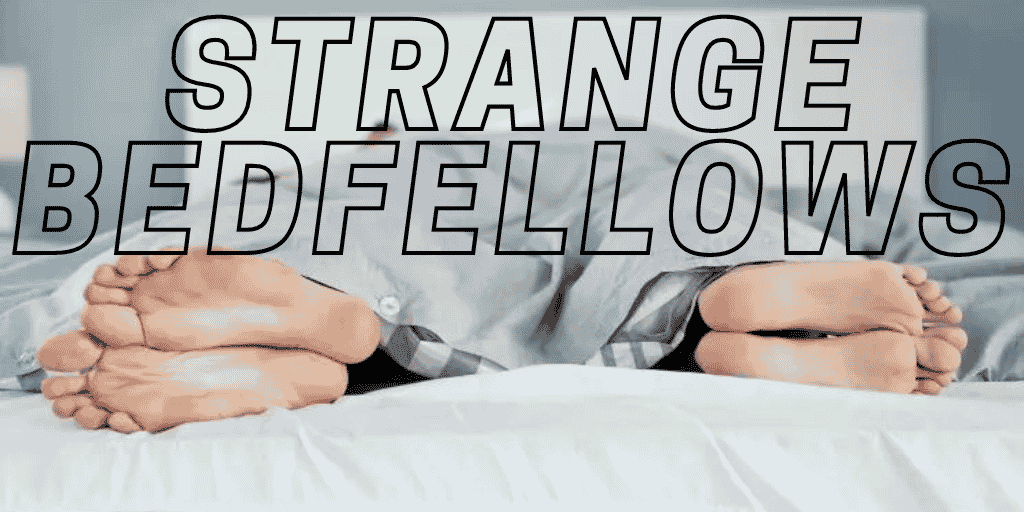 Other famous uses of the idiom “strange bedfellows”

“Tragedy makes for strange bedfellows” – Falling into Bed with a Duke, novel by Lorraine Heath

“Perhaps Bach and Beethoven are strange bedfellows for Mickey Mouse, but it’s all been a lot of fun.” — Walt Disney Company

“Art and business may be strange bedfellows, but an artist must make room in her bed for both.” — Affirmations for Artists, by prolific American writer, Eric Maisel

“Well, Kaleb’s voice whispered in Nikita’s mind, it seems this will make strange bedfellows out of us all.” — Bonds of Justice, a novel by Nalini Singh