‘As Dead As A Doornail’, Meaning & Context

Brave thee! Aye by the best blood that ever was broached. And beard thee too. Look on me well: I have eat no meat these five days; yet, come thou and thy five men, and if I do not leave you all as dead as a doornail, I pray God I may never eat grass more.

The lines are spoken by Jack Cade, who is leading a rebellion against the king.

One wonders what Shakespeare meant when he used that doornail simile. Perhaps he just used the simile, as we all use old familiar sayings, without thinking about it. But it must have had a connection with something real at some point in its history. It’s very strange. Dead as a doornail? A doornail? Why is a doornail more dead than any other nail? What could it mean?

A far more famous use of the “as dead as a doornail” phrase than Shakespeare’s is by Charles Dickens in A Christmas Carol. The narrator here certainly doesn’t know what it means, as he reflects on it and wonders what it could mean:

Marley was dead, to begin with. There is no doubt whatever about that. The register of his burial was signed by the clergyman, the clerk, the undertaker, and the chief mourner. Scrooge signed it. And Scrooge’s name was good upon change for anything he chose to put his hand to.

Old Marley was as dead as a doornail.

Mind! I don’t mean to say that I know, of my own knowledge, what there is particularly dead about a doornail. I might have been inclined, myself, to regard a coffin nail as the deadest piece of ironmongery in the trade. But the wisdom of our ancestors is in the simile; and my unhallowed hands shall not disturb it, or the country’s done for. You will therefore permit me to repeat, and emphatically, that Marley was as dead as a doornail.

The narrator is talking sense of course. that’s a very good point about coffin nails. And Marley was not so dead after all, as he was able to come back in the form of a ghost, and talk to Scrooge. There’s irony there.

And so, what is it about a doornail that is so dead? Well in previous times nails were quite valuable commodities and one could use them more than once. If you were to renovate or improve something you could pull the nails from the old and hammer them into the new.

But it was customary to hammer nails into doors, in particular, in a way that would make them unusable for anything else. Hammered hard, to their full extent, so that the tips emerged from the other side, then bent and hammered flat against the wood, means that they will not be easily extracted.

In that sense, they were dead, as even if you disposed of the door you would not be able to pull the nails out easily, and so they couldn’t be used, and might as well be dead. In fact, they are dead.

Perhaps that is why we talk about someone being as dead as a doornail. 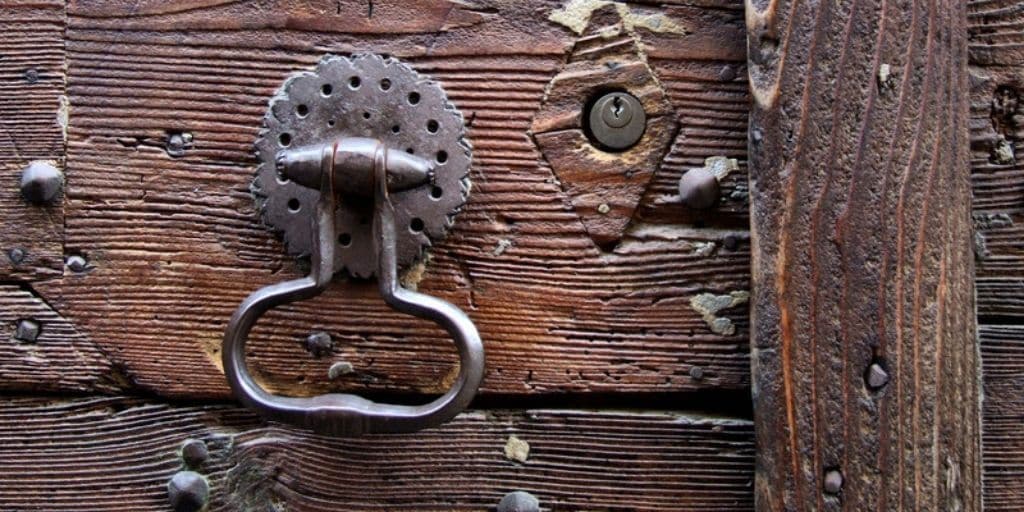 As dead as a doornail