“Gild the lily” is one of those phrases that originated in a Shakespeare text but have been slightly changed, so we now use that phrase using a different arrangement of the words

The actual reference from the play, King John, Act 4, Acene 2, is:

To gild refined gold, to paint the lily
To throw a perfume on the violet
To smooth the ice, or add another hue
Unto the rainbow, or with taper-light
To seek the beauteous eye of heaven to garnish,
Is wasteful and ridiculous excess.

“To gild refined gold, to paint the lily…” was misquoted in an allusion to this phrase by the Newark Daily Advocate in 1895, “One may gild the lily and paint the rose” was the misquote and it seems to have caught on: it replaced the original. “Paint the lily” was generally used, even into the twentieth century, but the idiom is now more frequently rendered as “gild the lily” and “painting the lily” is disappearing fast.

The meaning of “gild the lily”

“Gild the lily” has become a firmly established idiom. Although the wording is in a different arrangement from Shakespeare’s the idiom holds true to the spirit of the original wording and means the same.

It is a description of the process of embellishing or adorning something that doesn’t need embellishment because it is already beautiful or perfect. 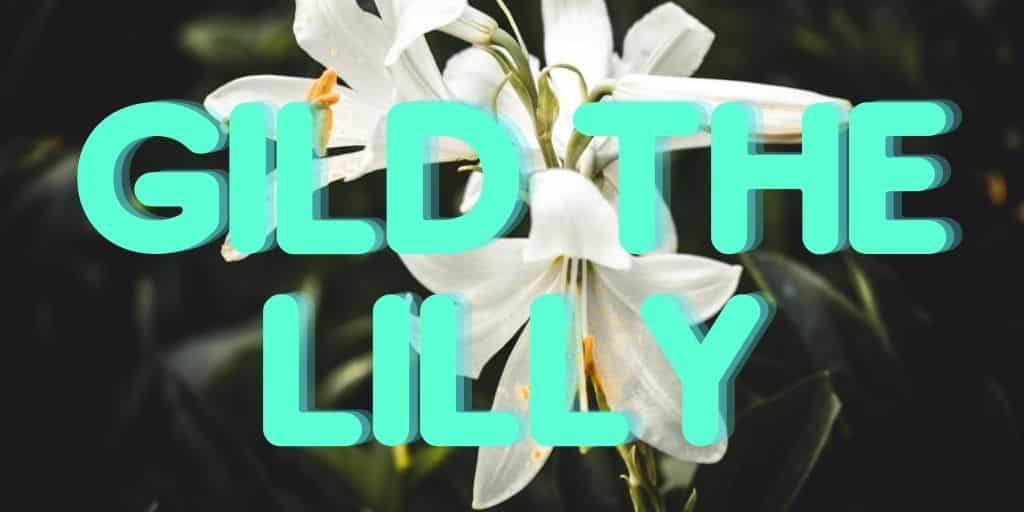 Synonyms for “gild the lily”

Hold a candle to the sun

Lay it on thick

“Gild the lily” in literature

The idiom has been used in scores of novels, poems and plays. Here are some examples:

“Gild the lily” in pop music

Don’t gild the lily, Lily is a pop song by 1950s rock star Del Shannon. It first appeared on the flip side of his record Hat’s off to Larry:

Gilding the Lily is a 2014 album by Devon Williams

Gild the Lilies The Shaking Sensations, 2013