‘Nothing New Under The Sun’, Meaning & Context

‘There is nothing new under the sun’ is one of those idioms that should have come from Shakespeare but does not. It is from that other great source of idioms – the Bible.

‘There is nothing new under the sun’ is one of the most important and powerful lines in the beautiful poetry of Ecclesiastes in the Old Testament:

What has been will be again,
what has been done will be done again;
there is nothing new under the sun.

Or even more beautiful, in the Jacobean language of the King James Bible: 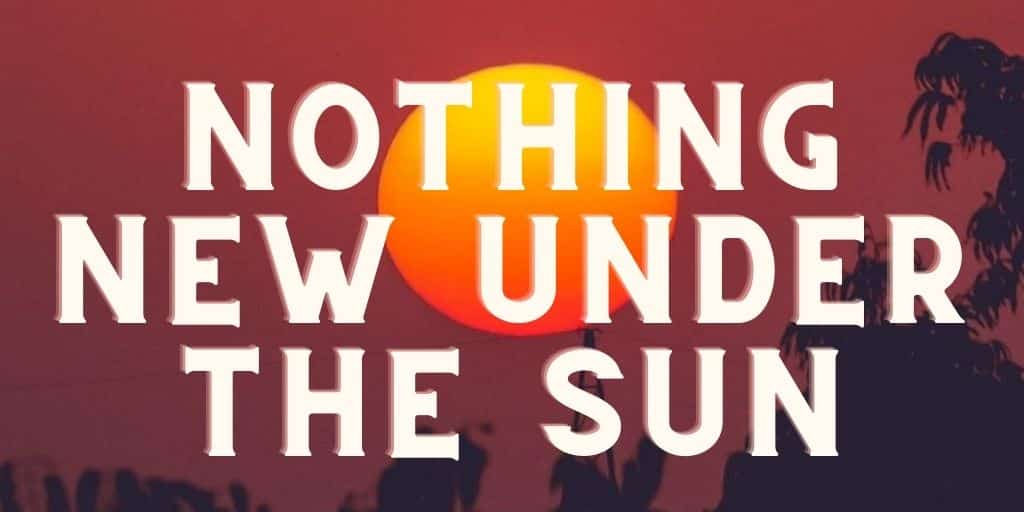 There’s nothing new under the sun… is there?

Ecclesiastes is a sermon by someone known as ‘the preacher.’ He talks about life in general but in this part, Ecclesiastes 1: 9, he makes the point that there is nothing new in this world. He uses the phrase ‘under the sun,’ specifying the endeavours of living human beings on Earth. Whatever you may encounter, however new or revolutionary it may seem to you, you can be sure that it’s not new.

Shakespeare knew that, and he clearly liked that bit of Ecclesiastes. One can see that he part quotes from it in Sonnet 95, beginning it with ‘If there be nothing new,’ and continuing with his main idea for the sonnet, playing around with the Ecclesiastes phrase, using ‘courses of the sun’ to refer to ‘days.’

If there be nothing new, but that which is
Hath been before, how are our brains beguil’d,
Which labouring for invention bear amiss
The second burthen of a former child.
Oh that record could with a backward look,
Even of five hundred courses of the sun,
Show me your image in some antique book,
Since mind at first in character was done,
That I might see what the old world could say
To this composed wonder of your frame;
Whether we are mended, or where better they,
Or whether revolution be the same.
Oh sure I am the wits of former days,
To subjects worse have given admiring praise.

Ecclesiastes 1 could well be a commentary on Shakespeare’s writing career. Shakespeare knew that however creative he wanted to be, everything he wrote about came from somewhere else – someone had dealt with it before him, and in most cases it was impossible, even for Shakespeare, to know where it had originated. That was true for all his plays.

For example, the wonderful tragic story of Romeo and Juliet. It is so modern (to Shakespeare’s time) and refreshing, that we think it came from the great creative mind of Shakespeare. But it did not. Shakespeare lifted the whole story almost intact from someone else, who took it from someone who had written a version of it before, and that writer had done the same. We can trace it back through several versions to the story of Pyramus and Thisbe in Ovid’s Metamorphasis, but Ovid must have got it from somewhere. Unfortunately, we lose track of it with him.

Each of those writers took that story and changed it a bit. During the retellings the names of the characters morphed into ‘Romeo’ and ‘Juliet,’ the names Shakespeare also used. When Shakespeare took the story up as something to adapt for the stage he applied his special dramatic and poetic genius to it, and we know the rest – the play is immortal. But the story wasn’t new.

And then, the American composer, Leonard Bernstein, took it up and so we have the musical, Westside Story. All he did to the story was change the names of the star-crossed lovers. Here again, we have a wonderful story, but it is the same story, going back to Ovid, and his sources before him. It demonstrates Ecclesiastes point about there being nothing new under the sun.

Even in science and technology, where we see incredible advances day by day, nothing can be new: every new thing is built on something that has gone before. For example, we think of Charles Darwin’s theory of evolution as something startlingly new. In one sense it was because of the books he wrote but his grandfather was already exploring the concept before Darwin was born, and, also, there were other scientists working on it. Like Shakespeare though, Charles Darwin was the one who wrote the definitive version.

When someone says ‘there is nothing new under the sun’ they are more or less saying, ‘I’ve heard that many times before,’ or ‘it always turns out that way,’ or ‘I’ve seen everything,’ or something along these lines.