‘Son Of A Bitch’, Meaning & Context

The origin of ‘son of a bitch’’

‘Son of a bitch’ is a common phrase in the American vernacular. If anyone uses it in any other English-speaking community it’s a sign that the speaker has some strong American connection or sentiment. However, the phrase did not originate in the United States: in its earliest form, it came from guess who? William Shakespeare, of course.

In King Lear, a Shakespeare play of 1605, there is a large amount of cursing and name-calling. Lear’s protector, the Duke of Kent, takes a hard line with Goneril’s steward, Oswald, for the way he has treated Lear, and attacks him both physically and with this memorable tirade:

“A knave; a rascal; an eater of broken meats; a
proud, shallow, beggarly, three-suited,
hundred-pound, filthy, worsted-stocking knave; a
lily-livered, action-taking knave, a whoreson,
glass-gazing, super-serviceable finical rogue;
one-trunk-inheriting slave; one that wouldst be a
bawd, in way of good service, and art nothing but
the composition of a knave, beggar, coward, pandar,
and the son and heir of a mongrel bitch: one whom I
will beat into clamorous whining, if thou deniest
the least syllable of thy addition.”

Shakespeare must have picked up the idea of someone being the son of a female dog from the life around him, and the crude and vulgar way ordinary people spoke. His friends, playwrights and actors he worked and socialised with, used the phrase as an insult, so presumably, they were translating the language they heard used in the taverns and among the actors backstage into their plays. As did Shakespeare.

Later uses of ‘son of a bitch’ in literature

Two of Shakespeare’s particular younger friends, Francis Beaumont and John Fletcher, who worked together, liked the phrase and used it in at least two of their plays. Their play, Coxcombe, 1625, has:

“They had no mothers, they are the sons of bitches”

“She did revile him… Calling him ye ‘sonn of a Bitch, asking him also where ye Bawd his mother was.”

And here is Shakespeare again, 9n Troilus and Cressida:

“Thou bitchwolf’s son, canst thou not heare?”

“Come out you sons of bitches!”

And at last, in 1673, the pure cursing of a man in the modern way in Canting Academy by Richard Head:

“And when we come unto the whit for garnish they do cry, marry fogh, pox on you, you son of a bich, you shall have it by and by.” 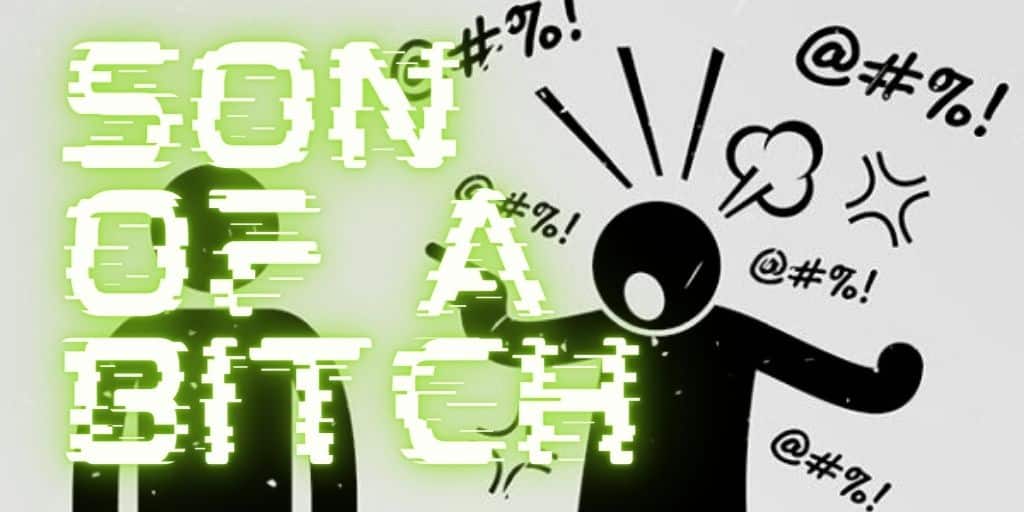 Shakespearean phrase: “Son of a bitch”

‘Son of a bitch’ goes to America

The term was not only commonly used in London’s underbelly but also in places far removed from London, an insult used even by the prim and proper puritans who became the Pilgrim Fathers, and so transplanted it in America, where it put down firm roots and flourished, eventually dying out in England but developing into America’s favourite expletive.

Modern use of ‘son of a bitch’

It is a multi-purpose phrase that, by being so common, has lost its sting and not as biting as it once was.

It is often used vulgarly to be critical of someone for his actions. ‘The son of a bitch has stolen my watch.’

It is aimed directly at someone. ‘Don’t talk to me, you son of a bitch!’

It is also used to express approval or admiration of someone: ‘Talented son of a bitch, isn’t he? I never knew that.’

It is used to express pity or sympathy for someone: ‘Poor son of a bitch – he’s lost everything and has to start all over again.’

It is used as an exclamation. Working on something difficult and not making progress: “Son of a bitch!” Or perhaps hitting one’s hand with a hammer while putting in nails.

These Shakespearean expressions so often start with something literal like the comparison with a real offspring of a dog – ‘the son and heir of a mongrel bitch’ in Shakespeare, to a general expression, used by millions in our time,  which may not literally refer to its original reference words.