“Eat, drink and be merry” is a much-used English idiom, popular particularly among young people. It suggests the carefree attitude of young people intent on an enjoyable life, where they encourage each other to eat up, drink up and give no thought to the future, because life is short.

Does “eat, drink and be merry” come from Shakespeare?

“Eat drink and be merry” is not a phrase that Shakespeare used in his plays, although he had plenty to say about eating and drinking, or at least his characters did. His plays are full of characters who among them adopt every kind of philosophy imaginable, and some, like Falstaff, and Sir Toby Belch, practice Epicureanism, also known as hedonism, without necessarily knowing that it is part of the philosophy of a Greek philosopher, although both are educated men and probably do know that. 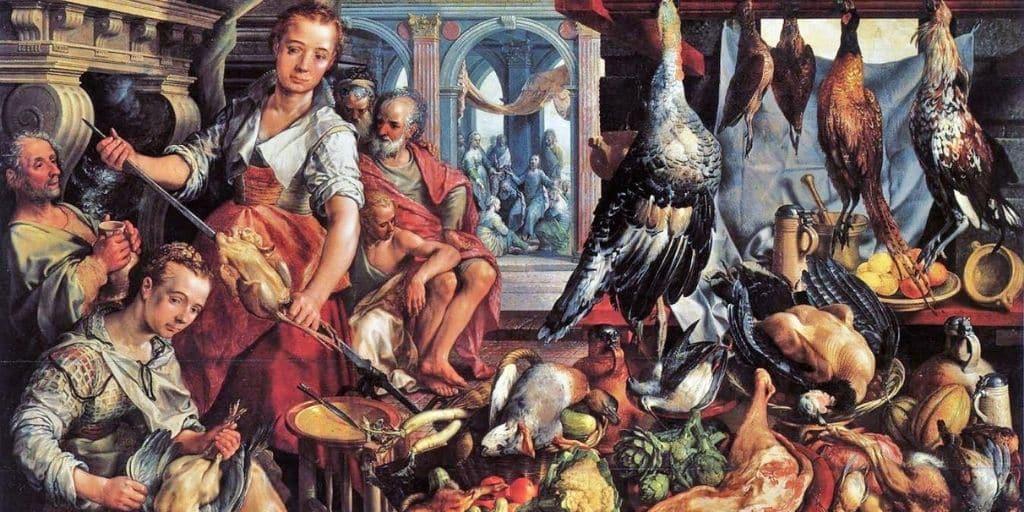 Eat, drink and be merry – a 16th century feast

Where does the saying “eat, drink, and be merry” originate?

The Greek philosopher Epicurus promoted the philosophy of living life to its fullest extent. In his philosophy, the path to true happiness lay in the pursuit of pleasure. The English idiom “eat, drink and be merry, for tomorrow we may die.” is often ascribed to Epicurus. But he was a significant philosopher, with other things to say, and his comments on eating and drinking meant nothing more exciting than that those things would do no harm.

Although Epicurus introduced the idea of eating, drinking, and being merrry into his philosophical writings, the actual wording appears, as so many other idioms do, if they are not Shakespearean, in the Bible.

“Eat drink and be merry” in the Bible

The closest in wording to “eat, drink, and be merry, for tomorrow we may die” comes from 1 Corinthians 15:32:

“What do I gain if, humanly speaking, I fought with beasts at Ephesus? If the dead are not raised, Let us eat and drink, for tomorrow we die.”

“And behold, joy and gladness, killing oxen and slaughtering sheep, eating flesh and drinking wine. “Let us eat and drink, for tomorrow we die.”

The greatest poet of the Old Testament, Ecclesiastes, puts it like this:

“So I commend the enjoyment of life, because there is nothing better for a person under the sun than to eat and drink and be glad. Then joy will accompany them in their toil all the days of the life God has given them under the sun.”

The phrase appears in that way in the New Testament as well. In Luke 12: 19 Luke puts it into Jesus’ mouth. Jesus says in a parable “and I will say to my soul, Soul, thou has much goods laid up for many years; Take thine ease, eat, drink, and be merry.” it is doubtful though, that Jesus intended it in the way that Epicureans interpret it.

What do Shakespeare’s characters have to say about eating and drinking?

One of the many things that made Shakespeare’s audiences love going to the theatre to see his plays was that they were full of ordinary people doing the ordinary things that they did – working, watching sport, socialising – and eating and drinking was an important part of that life. Drinking, in particular, was very popular, and with a life expectancy of about thirty-two for men, the end of their time was often hastened due to alcohol, which has always been, and still is, at the very centre of English culture.

Here are some of the references to drinking in Shakespeare’s plays.

A man cannot make him laugh – but that’s no marvel; he drinks no wine.

I pray you, do not fall in love with me, For I am falser than vows made in wine.

Why, sir, for my part I say the gentleman had drunk himself out of his five senses.

The Merchant of Venice: Act1, Scene 1

Drink sir, is a great provoker of three things….nose-painting, sleep and urine. Lechery, sir, it provokes, and unprovokes; it provokes the desire but takes away the performance.

Good wine is a good familiar creature, if it be well used.

I would give all my fame for a pot of ale.