‘As Old As Methuselah’, Meaning & Context

Meaning of “as old as Methuselah”

Methuselah is a character who appears in Genesis, the first book of the Old Testament.  He lived for 969 years, which is no mean feat, and no one, either in fiction or real life, lived as long as he did, and so, if you want to refer to someone as very old – usually as an insult – you may say that he is ‘as old as Methuselah’.

Origin of “as old as Methuselah”

Methuselah was a Hebrew patriarch. This was first recorded in print in English in Miles Coverdale’s Bible, 1535:

The actual idiomatic phrase ‘as old as Methuselah’ can be traced back to at least the 14th century. An allusion to it is cited as circa 1390 in F. J. Furnivall’s Minor Poems, 1901:

“…if a mon may libben heer As longe as dude Matussale.”

Methuselah’s name was given to him by his father, Enoch, in response to a prophecy concerning the flood. According to the Masoretic and Samaritan texts, he seems to have died in the year of the flood.

When Methuselah had lived 187 years, he begot Lamech, who in turn, begot Noah. So Methuselah’s other claim to fame is that he was the grandfather of Noah. After the birth of Lamech, Methuselah lived 782 years and begot more sons and daughters. All the days of Methuselah came to 969 years; then he died.—That’s what it says in Genesis 5:21-27. However, we must not for a moment assume that any of these people ever lived. There is no evidence for that, but if they did exist one should not believe it possible for any human being to live as long as they did. If they did they must have spent most of their lives longing for death. 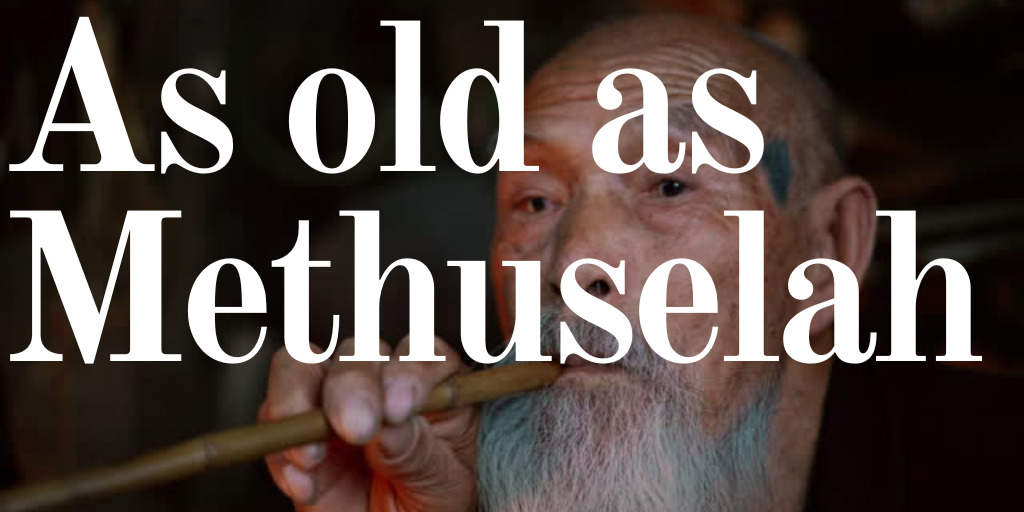 “As old as Methuselah”

Old people are not universally honoured in Western culture, as they are in some other cultures. In fact, they are often regarded as something of a nuisance, a class of people who don’t work and have to be supported by the younger generations. The names that refer to them are therefore mixed in tone:

Phrases used to describe the older community (cool and uncool)

The oldest star in the universe

The oldest star in the universe is HD140283 — or Methuselah as it’s commonly known. It’s located 190.1 light-years away. Astronomers refined the star’s age to about 14.3 billion years plus or minus 800 million years. The curious star is located some 190 light-years away from Earth in the constellation Libra and it rapidly journeys across the sky at 800,000 mph (1.3 million kilometers per hour).

Methuselah covers the width of the moon in the night sky every 1,500 years.

You can’t see Methuselah with the naked eye. It can only be seen using a telescope

Predominantly made of hydrogen and helium.