A laughing stock is something you would not like to be described as because it says that you are someone to be persecuted by the mockery and ridicule of all those around you.

It is one of the phrases used by Shakespeare that has been taken up and has entered into the English language as the perfect way of expressing something.

To be placed in the stocks was a painful punishment used in Shakespeare’s time. It was something between a warning and prison (or execution).

The stocks were ankle manacles mounted on a low wooden stage. When someone in the village committed an offense against his neighbours he (or she) could be punished by being put in the stocks – in other words, being laid on his back with his feet anchored to the platform. And there he would lie while the villagers moved around him, witnessing his disgrace. Boys might poke him with sticks or throw things at him. And they would laugh at the poor fellow’s predicament. Having to spend a day in the stocks was very uncomfortable but there is no doubt, the mockery and ridicule of one’s neighbours was possibly even more uncomfortable. 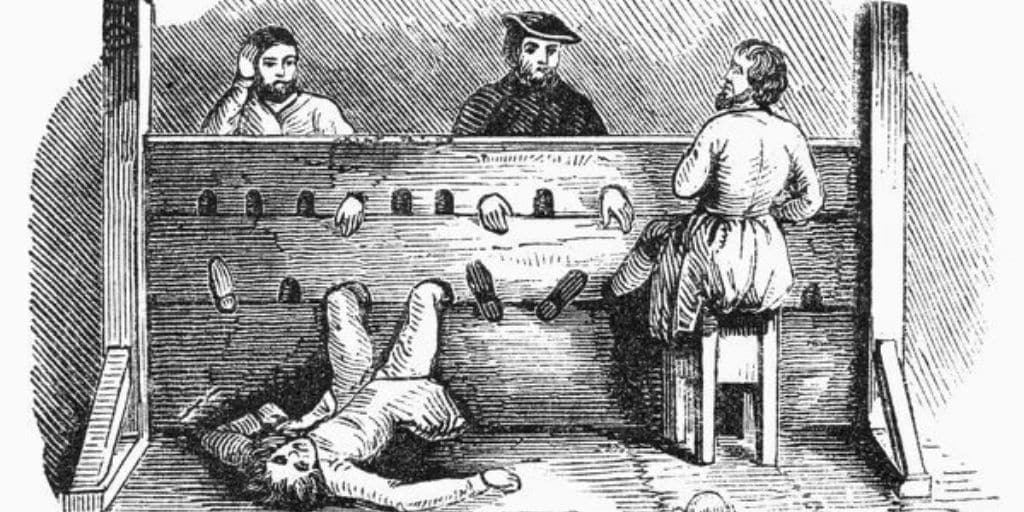 First known use of the phrase “a laughing stock”

The word “stock” first appeared in English in 862. It came into the language, adapted from the German, meaning a tree trunk. At that time the word referred to someone treated as the object of some action. Someone who was accused of something was known as a “pointing stock.” Someone frequently beaten with a whip was known as a “whipping stock,” and someone laughed at was a “laughing stock.” So the phrase hasn’t changed over a thousand years.

In 1533, in one of his books the Reformation priest John Frith wrote that as a religious reformer he had been treated as a laughing stock:

“Albeit… I be reputed a laughing stock in this world.”

Shakespeare’s use of “a laughing stock”

Shakespeare, always looking for the right image, always seeking and choosing something visual, picked it up and used it in The Merry Wives of Windsor (act 2, scene 1)  Sir Hugh Evans says to Dr Caius;

“Pray you let us not be laughing stocks to other men’s humours: I desire you in friendship, and I will one way or other make you amends.”

The image of the stocks would have been familiar to all those attending the play – something very visual – and the mind would have filled the social scene in – the villagers gathering around, laughing. It is predictable crowd behaviour, which is never benign but always cruel.

By imagining the cruelty, pain, and embarrassment of the stocks the audience will have fulfilled Shakespeare’s intentions in presenting that image.