Looking for Henry IV Part 2 quotes? Read our selection of the very best quotes from Henry IV Part 2, along with speaker, act and scene.  In the play, King Henry is exhausted and sick from all the troubles he’s had as king, and when he dies at the end of the play his son, Prince Henry – known as Hal – becomes King Henry V. With this narrative Shakespeare brings the many characters to life with strong dialogue and some very memorable quotes.

Read on below for the most well known Henry IV Part 2 quotes:

Rumour is a pipe
Blown by surmises, jealousies, conjectures
And of so easy and so plain a stop
That the blunt monster with uncounted heads,
The still-discordant wavering multitude,
Can play upon it.

Upon my tongues continual slanders ride,
The which in every language I pronounce,
Stuffing the ears of men with false reports.

But let one spirit of the firstborn Cain
Reign in all bosoms, that, each heart being set
On bloody courses, the rude, Scene may end,
And darkness be the burier of the dead.

Let heaven kiss earth! Now let not Nature’s hand
Keep the wild flood confined! Let order die!
And let this world no longer be a stage
To feed contention in a ling’ring act.

I can get no remedy against this consumption
of the purse. Borrowing only lingers and lingers
it out, but the disease is incurable.

I am not only witty in myself, but the cause that wit is in other men.

Since all is well, keep it so: wake not a sleeping wolf.

We are time’s subjects, and time bids be gone.

And so, with great imagination
Proper to madmen, led his powers to death
And, winking, leapt into destruction.

Past and to come, seem best; things present worst.

He hath eaten me out of house and home.

Let the end try the man.

Thus we play the fools with the time, and the spirits of the wise sit in the clouds and mock us.

He was indeed the glass
Wherein the noble youth did dress themselves.

Uneasy lies the head that wears a crown.

A man can die but once: we owe a death.

We have heard the chimes at midnight.

So the question stands.
Briefly, to this end: we are all diseased
And with our surfeiting and wanton hours
Have brought ourselves into a burning fever,
And we must bleed for it; of which disease
Our late King Richard, being infected, died.

Hereof comes it that Prince Harry is
valiant, for the cold blood he did naturally inherit
of his father he hath, like lean, sterile, and bare
land, manured, husbanded, and tilled with excellent
endeavor of drinking good and good store
of fertile sherris, that he is become very hot and valiant.

Why doth the crown lie there upon his pillow,
Being so troublesome a bedfellow?
O polished perturbation, golden care,
That keep’st the ports of slumber open wide
To many a watchful night!

Dost thou so hunger for mine empty chair
That thou wilt needs invest thee with my honors
Before thy hour be ripe? O foolish youth,
Thou seek’st the greatness that will overwhelm thee.

God knows, my son,
By what bypaths and indirect crook’d ways
I met this crown, and I myself know well
How troublesome it sat upon my head.
To thee it shall descend with better quiet,
Better opinion, better confirmation.

You won it, wore it, kept it, gave it me.
Then plain and right must my possession be,
Which I with more than with a common pain
‘Gainst all the world will rightfully maintain.

Commit
The oldest sins the newest kind of ways.

His cares are now all ended.

Sweet princes, what I did I did in honor,
Led by th’ impartial conduct of my soul;
If truth and upright innocency fail me,
I’ll to the king my master that is dead
And tell him who hath sent me after him.

You shall be as a father to my youth,
My voice shall sound as you do prompt mine ear,
And I will stoop and humble my intents
To your well-practiced wise directions.

Stand here by me, Master Shallow. I
will make the King do you grace. I will leer upon
him as he comes by, and do but mark the countenance
that he will give me.

I know thee not, old man.

Falstaff: My king, my Jove! I speak to thee, my heart!
King Henry V: I know thee not, old man. Fall to thy prayers.
How ill white hairs become a fool and jester!

Presume not that I am the thing I was.

Are we missing any great Henry IV Part 2 quotes? Let us know in the comments section below. 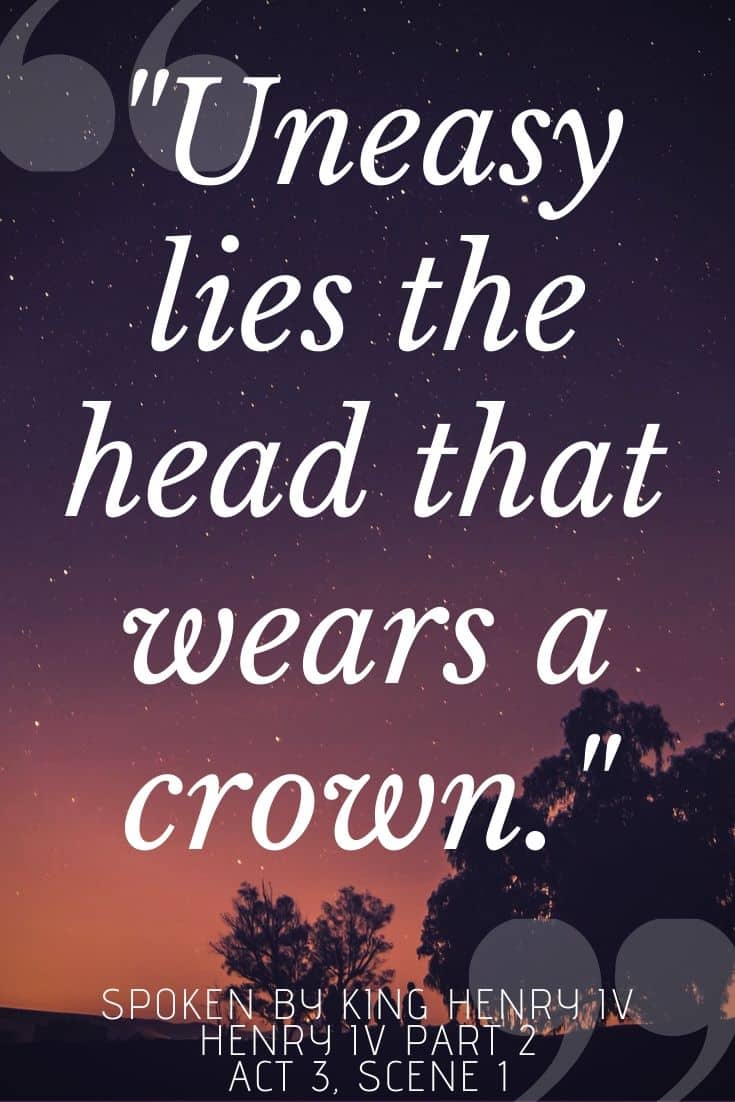