‘A Pound of Flesh’, Meaning & Context

Someone demanding their pound of flesh is saying that they are determined to get what is theirs by right, no matter how it may affect anyone else and regardless of the consequences. It comes from The Merchant of Venice and is spoken by Shylock, a moneylender, who is an outcast in Venice because he’s a Jew.Insisting on a pound of flesh is a strong and extreme demand, and is a phrase that is in common use in English-speaking countries.

On the literal level the idea of someone wanting a pound of flesh is very strange so what does it mean? It’s another of Shakespeare’s creative inventions, and the phrase is one of his greatest plot drivers.

Jews suffered discrimination in Elizabethan London. When playwrights put Jewish characters on the stage they presented them as villains. Actors who played them were subject to abuse from the audience and had to dodge missiles.

Jews were not allowed to enter the professions or conduct legitimate business and so, in order to survive, they had to find other ways of making their living. Many of them became money lenders, lending out money for interest.

Jews thus became associated with money-lending, and businessmen who borrowed from them accused them of charging unreasonable rates.  Prejudice against them as thieves and swindlers took root and grew and that mindset is often still with us in the modern world, where Jews are stereotyped in some communities as mean, dishonest money-grabbing individuals. Shakespeare has been accused of being anti-Semitic as a result of his portrayal of Shylock in that way in The Merchant of Venice.

But that’s a false accusation. It is true that Shakespeare presents Shylock as a bitter, Christian-hating, money-grabbing, stingy man, dressed in the gabardine that set Jews apart from other citizens, but he gives Shylock a strong reason for hating Christians and wanting to get revenge for how they have treated him and the rest of the Jewish community.

Context of the phrase ‘Pound of flesh’

One of the merchants, Antonio, is having a problem with his ships being late in returning to Venice. His friend, Bassanio, asks him for money. He needs it to woo the wealthy Portia and has no money himself but, if successful, and he marries her he will be able to pay it back. Antonio’s money is all tied up in the ships that are delayed, and the only way he can help his friend is to borrow from a money-lender.

He approaches Shylock and even while asking for help he insults him. He tells him that his ships will be in the port in three days and then he will be able to pay.

Shylock agrees to lend him the money. He says, just for fun (a merry sport), if he isn’t repaid in three months Antonio should give him a pound of his flesh. This is how he puts it:

Go with me to a notary, seal me there
Your single bond; and, in a merry sport,
If you repay me not on such a day,
In such a place, such sum or sums as are
Express’d in the condition, let the forfeit
Be nominated for an equal pound
Of your fair flesh, to be cut off and taken
In what part of your body pleaseth me.

Antonio agrees to this deal.

The ships are lost in a storm and just at that time Shylock’s daughter, Jessica, runs off with a Christian, taking money and jewellery with her. Shylock, burning for revenge against the Christians generally, now serious about the ‘merry sport’, takes Antonio to court to claim his pound of flesh.

The Duke doesn’t know how to deal with it but Basanio, having now won Portia’s heart, recruits his clever fiancé, who is an accomplished lawyer, to appear as a prosecuting judge, disguised as a man.

The trial takes place and Portia grants Shylock the pound of flesh, but advises him to show mercy. Shylock is very upset and can’t wait to take his pound of flesh. He takes out his knife to cut the flesh from the area close to Antonio’s heart and Portia stops him and reminds him that it is against the law for anyone to shed even a drop of Christian blood.

Shylock pauses and she rules that for threatening the life of a Christian he will have to forfeit all his possessions and convert to Christianity.

The play ends with an image of a miserable Shylock, who has been defeated, and the Christian community celebrating their victory. 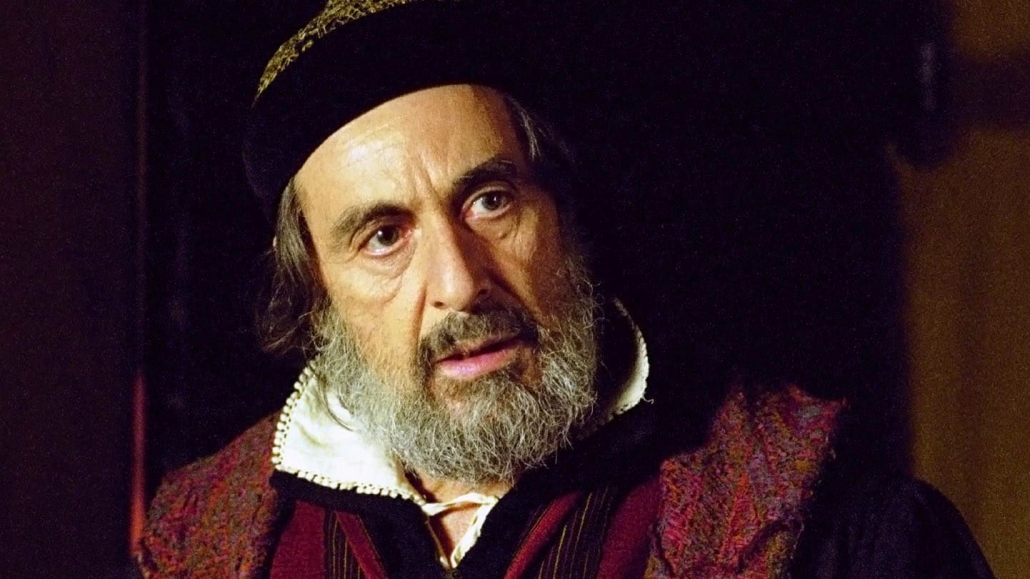 Al Pacino playing Shylock, demaing his ‘pound of flesh’ in The Merchant of Venice