Shakespeare most famously used the term ‘green-eyed monster’ in Othello. In Act 3, Scene 3 of the play Iago tries to manipulate Othello by suggesting that his wife, Desdemona, is having an affair. Iago plants the seeds of jealousy in Othello’s mind by saying:

“O beware, my lord, of jealousy;
It is the green-eyed monster which doth mock the meat it feeds on.”

Shakespeare had previously used the idea in The Merchant of Venice where Portia refers to “green-eyed jealousy” (Act 3, Scene 2).

In Renaissance England most emotions were matched with colours. Green was matched with envy and jealousy. Portia refers directly to ‘green-eyed jealousy’ and then, in the later play Othello, Shakespeare turns it into an even more visual idea, making it a monster, suggesting that it is powerful and dangerous. He adds the caution ‘beware’ to make it even more threatening.

And so, although the idea of jealousy being green was an everyday matter for audiences, Shakespeare has, as usual, taken some ordinary thing and turned it into the immortal idiomatic, highly visual, phrase – ‘green-eyed monster.’

These days we still refer to emotions in terms of colour. We almost always couple envy and green. We are more likely to say ‘I’m green with envy,’ than simply, ‘I’m envious.’ And if we say, ‘I’m green,’ everyone understands.

Coupling other colours with emotions is still very much with us too. If we are down we may talk about feeling blue – and countless songs use that idea, including titles like ‘It’s been a blue day,’ ‘I’ve got the blues,’ ‘Rhapsody in blue,’ and so on. We may call a coward yellow, and the USA military awards injured servicemen the Purple Heart, in recognition of their courage, purple being associated with courage. One of the most common colour matchings is red and anger.

In Othello, the line, ‘beware the green-eyed monster’ is very important in the text. It’s ironic, because it’s made under false pretenses. We, the audience, know what Iago is doing but Othello does not, so it heightens the dramatic irony that’s at work in the play. It’s uncomfortable for the audience as it puts them in the position of being conspirators in Iago’s manipulation. We also watch with dismay as the other characters become confused and paralysed by the multiple lies ‘honest’ Iago tells them, while we know the true situation.

‘Green-eyed monster’ is yet another of the countless phrases coined by Shakespeare that make our language richer. 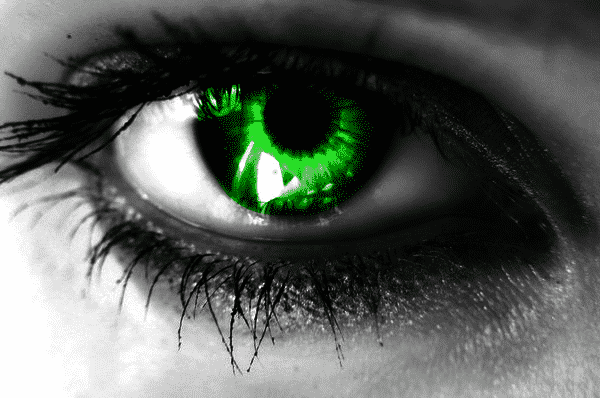 The green=eyed monster is looking at you!