“Still waters run deep” is an idiom that does not come, in that wording, from Shakespeare. Shakespeare uses a different phrase but with a similar meaning: “Smooth runs the water where the brook is deep.” Henry V1 Part 2 Act 3 Scene 1

It originally meant a deceitful person who is hiding something dangerous in their nature but it has evolved over centuries and now refers to people who are humble, intellectual, complex or possessing surprising qualities.

This is an idiom that emphasises the danger of judging people by the way they present themselves. Just because someone doesn’t exhibit their emotions doesn’t mean that they don’t have strong feelings in that regard. It’s a metaphor, referring to a river that seems calm and relaxed but if you dived in you would find yourself being whisked away by the turmoil beneath the surface. Just because you can’t see something it doesn’t mean it’s not there.

What is the origin of “Still waters run deep”?

The idiom “still waters run deep ” was coined with that wording several centuries before Shakespeare lived, and originated in Latin as:

This Latin version, quoted by several writers, gave way to the English version in about 1400, when writers began writing in English, instead of Latin, Greek, or French. English was not a literary language until it broke into high culture with Chaucer and his fellow English poets, and flowered with the Elizabethans.

The idea, worded slightly differently from place to place, also appears in other works, such as Aesop’s fables and in French proverbs.

Some examples of how the idiom could be used:

“She looks all sweet, as though butter wouldn’t melt in her mouth, but as they say, still waters run deep. You should see her at parties when she’s had a couple of drinks. Wow!”

“My mother doesn’t talk much when we’re all gathered together, and looks very calm but, you know, still waters run deep. Before we arrive she spends the whole day rushing about, shopping, cooking, making sure everyone is coming, and without her energy nothing would happen in this family.” 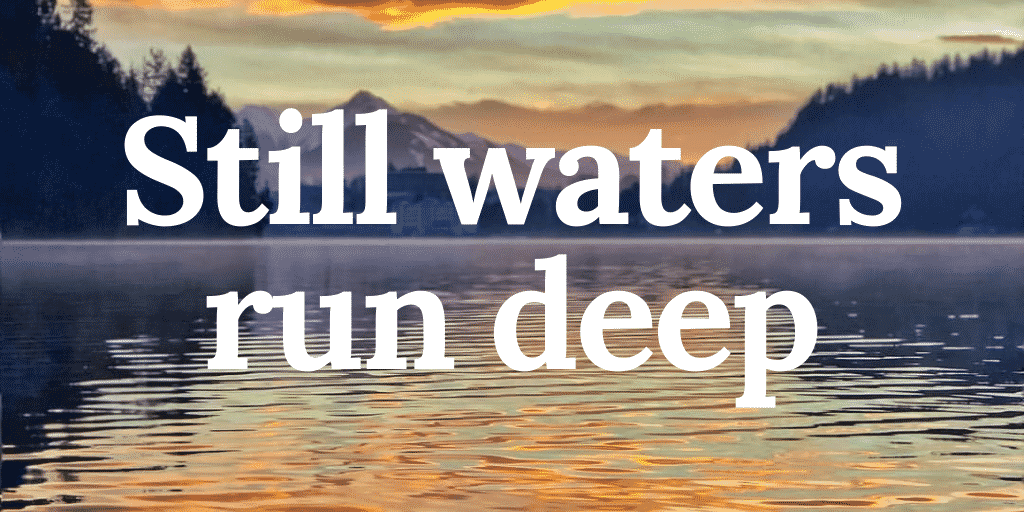 “Still waters run deep”, a not quite Shakespearean phrase

How does “Still waters run deep” relate to Shakespeare?

Shakespeare uses the phrase “smooth runs the water where the brook is deep”, which is a different way of expressing the idiom we are so familiar with: “Still waters run deep.” Perhaps Shakespeare was aware of the original wording and adapted it. However, his own wording didn’t catch on and travel down the path of idioms. The Latin one did.

William Shakespeare was one of the greatest observer of things that occur in nature, along with Charles Darwin and Leonardo Da Vinci. As the young Will went about his native Warwickshire, probably with other boys, he noticed the way brooks and rivers changed as they flowed from their sources. It would have struck him that where a shallow section rushes over pebbles and rocks it makes a lot of noise and throws up a spray, whereas the most dangerous, deepest water stands silently, with no visible movement on its surface.

He would also have discovered how dangerous it was as he and his friends would strip and jump in, even though swimming had not yet been invented as something a human being could do. Consequently, young people were drowning as they were pulled down by the currents below. Local authorities tried to save lives by banning swimming but thousands of boys and young men drowned every year in England. In 1571 Cambridge University prohibited swimming in the River Cam. The punishment was two public whippings, a ten shilling fine (three weeks’ wages for a skilled tradesman) plus a day in the stocks for a first offence and expulsion from the university for the second.

Young Will’s observations were never wasted and later, in his play, Henry VI Part 2 a courtier, Suffolk, comments on a fellow lord, warning the king about how dangerous he is.

Smooth runs the water where the brook is deep,
And in his simple show he harbours treason…
No, no, my sovereign, Gloucester is a man
Unsounded yet and full of deep deceit.

That is a beautiful use of his observation. Gloucester is a bit of a mystery – a quiet man no one really knows anything about, presenting himself as uncomplicated, but that hides the treason that’s raging in his heart. It’s a demonstration of the wonderful way Shakespeare’s poetic mind works.