“Bated breath” is a phrase coined by Shakespeare in The Merchant of Venice, spoken by Shylock in Act 1, Scene 3:

Shall I bend low and in a bondman’s key,
With bated breath and whispering humbleness, Say this;
‘Fair sir, you spit on me on Wednesday last;
You spurn’d me such a day; another time
You call’d me dog; and for these courtesies
I’ll lend you thus much moneys?

You will likely never use the word “bate” or “bated,” as it is an archaic English word that has long disappeared from the English language. There is one exception, however, where you will use it in your everyday speech – especially if you tend to be a bit dramatic when describing your experiences.

That exception is its pairing with the word ‘breath’, as we see in The Merchant of Venice.

Together the two words form what is now a common idiom which most English-speaking people will have used at least once. They will often say something like, “On the day they released the exam results I waited for the email with bated breath.” Not everyone knows what bated is, and how one’s breath comes to be bated when one is apprehensive or nervous, but everyone knows what is meant when someone uses the phrase.

Shakespeare used it slightly differently from the way we use it today. In his example, it means Shylock “subduing” his breath in a gesture of humility. Shakespeare took “abated”  –  a word that is still very much alive in English, also meaning suppressed and knocked off the “a,” and, for the sake of fitting it neatly into his metric scheme, made it a two-syllable instead of a three-syllable word.  And hey presto, we have the immortal idiom. We use it more in the sense of holding our breath than abating or slowing it down, but it basically amounts to the same thing.

Eventually, the word “bated” will be entirely lost. But it will still be used. That sounds like a contradiction, but the explanation of that conundrum is simple. Already, most people don’t take the origin of the word into account when using it, don’t really care what it means outside of its pairing with “breath” and they spell it b-a-i-t-e-d instead of b-a-t-e-d, when writing it. In time that spelling will be the dominant version and then it will become the correct spelling. That’s how living languages work. And, of course, when that happens it will have lost its connection with its original meaning and the word will then be completely lost.

Spelling it with the “i” in it it brings it close to that fate. When any usage is used in a work of literature that has a high readership it catches on and pushes the language forward, as we have seen with Shakespeare and other writers as they use language in creative ways. Look at the spelling in one of the best-selling books of all time, Harry Potter and the Prisoner of Azkaban. We have: 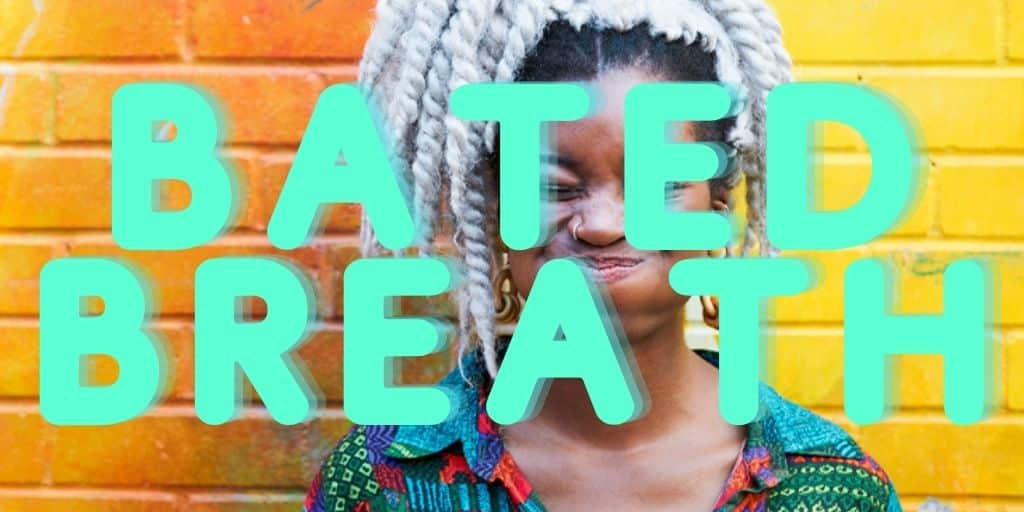 One of the reasons for the disappearance of a word is that it loses its usefulness. So it’s not surprising that this once-robust word has gone. Its meaning is related to mediaeval sports, so it’s no longer useful.

“Bate” had two uses before Shakespeare immortalised it in the phrase that became a favourite idiom. It was a verb used in falconry, meaning to jump violently from a perch to the falconer’s fist. That would often involve a flapping of wings and straining against the leash in an effort to escape. The bird would then be bating. The word came from the French word “batre”, to beat.

The other meaning was the blunting, or suppressing the danger of, a sharp rapier blade. The rounded wooden ball fitted to the tip of the blade was known as a bate, and, when it was on the sword was bated.