‘Come What May’, Meaning & Context

‘Come what may’ is yet another English idiom that comes from Shakespeare’s works. As we use it today it means being prepared to do something regardless of the consequences, to not allow anything to distract from that, no matter how hard or difficult it becomes.

It also means whatever will happen will happen regardless of what else may occur. The expression is used when one is resigned to pursuing a certain path no matter what obstacles may come up; it is also used to mean that one will stand firm or may be relied upon no matter what hurdles may occur. 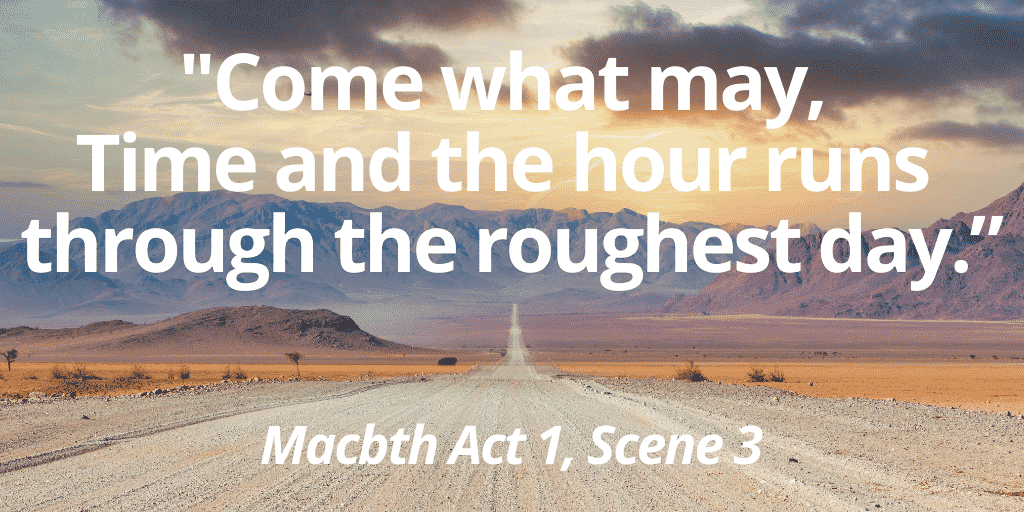 Origin of ‘Come what may’

“Come what come may,
Time and the hour runs through the roughest day.”

Modern English has a preferred idiom for that: it has adopted the Spanish idiom, ‘que sera sera’ as its own. When you say ‘Come what may,’ on the other hand, you are expressing your determination to do something without any distraction and regardless of the consequences.

A version of the phrase was known in France as early as 1375, shown here from John Barbour’s, The Bruce: “Thai wuld defend, avalze que valze.” “Avalze que valze” is “vaille que vaille” in modern French. It means “Let it avail what it may, come what may”.

The phrase reached the USA by 1878 when it appeared in the 4th January edition of The New York Times: “…and should Parliament endorse that sentiment, come what come may, the might of England shall be put forth with a vigour and earnestness worthy of her old fame”.

‘Come what may’ in Shakespeare’s plays

If you want to say that it’s inevitable that something will happen whatever you do, you will say ‘what will be will be’ or ‘que sera sera.’ And that’s how Shakespeare uses it. When the three witches tell Macbeth that he’s going to be king he has the problem of thinking about how that is going to happen. His first reaction is that he would have to kill the King, Duncan, but he pushes that thought away. It stays on his mind, however, and he tries not to think about it, taking the attitude that if it were true that he was going to become king, it would happen whatever he did. He tells himself: “Come what come may/ Time and the hour runs through the roughest day,” which is to say, ‘what will be will be’ or ‘que sera sera.’ That is how the idiom is used in Macbeth.

It’s interesting to note that the Spanish phrase ‘que sera sera’ goes back a long way and predates Shakespeare by centuries.

Shakespeare uses the exact wording ‘come what may’ in Twelfth Night, Act 2, Scene 1.

‘But come what may, I do adore thee so
That danger shall seem sport, and I will go.’

In Twelfth Night Viola’s twin brother Sebastian has been washed ashore near the coast of Illyria after a shipwreck. A piratical sea captain, Antonio, has been looking after him. Antonio is willing to risk danger by following Sebastian to Duke Orsino’s court, where Antonio is a wanted man.

Synonyms for ‘come what may’

There are other ways of expressing the idea of ‘come what may’, meaning what will happen will happen.

One can use words – such as: automatically, undoubtedly, unquestionably, accordingly,  axiomatically, naturally, no doubt.

Or one can use other phrases – such as: by any means whatsoever, one way or another. by any means, whatever happens, as a matter of course, whatever may happen.