“Flesh and blood” is probably the most physical image one could ever come up with for any purpose, and perfect as an image to refer both to the human species and the families that belong to it.

We use “flesh and blood” in two main ways:

Origin of the idiom “flesh and blood”

Where did the phrase come from? By the time Shakespeare arrived on the scene, “flesh and blood” was already well dug in as a commonly-used phrase.

We don’t know exactly how long the phrase has been around but we can pinpoint its first appearance in an English text more than a thousand years ago. It appears in an early translation of the Bible into Old English – the Anglo-Saxon Gospels, Matthew 16:17 in around 1000 AD:

This old English phrase was later translated for the King James Bible as:

“Flesh and blood hath not revealed it unto thee.” 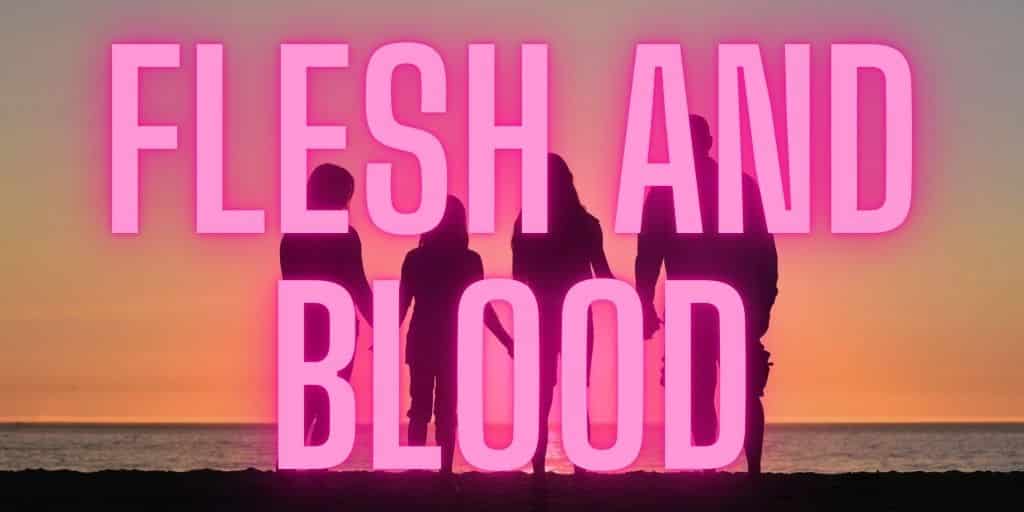 “Flesh and blood” in Shakespeare’s works

The phrase “flesh and blood” was around long before Shakespeare and when he used it more than a dozen times in his plays it was already a common way of referring to the human race. Shakespeare obviously loved it, and in every case in which he used it, it fitted right into his themes. It was Shakespeare who tweaked the meaning to make it about family.

How powerful it is when King Lear, ill treated and tortured by his daughters, can’t believe that it’s his own flesh and blood that’s done that to him. The very use of those words also suggests the pain he is experiencing. It is no wonder that Shakespeare loved using the phrase. It is probably his liberal use of it that has made it the common idiom it is today.

“Flesh and blood” is a phrase that Shakespeare used in 13 of his plays:

The Merchant of Venice

“I can’t believe the beauty of this baby, and that she’s my own flesh and blood.”

“It’s all very well to rely on the gods who sit aloof on Mount Parnassus but we of flesh and blood have to take responsibility for ourselves.”

“I am only flesh and blood – I can’t perform miracles.”

“I don’t believe in ghosts – if a man suddenly appears before me I know that he’s only flesh and blood.”

“I can’t change things: I’m only flesh and blood.”

Idioms with the word “blood”

Idioms with the word “flesh”