The page includes the very best JK Rowling quotes – both personal quotes and quotes from the Harry Potter series.

Joanne Rowling is an unlikely but real phenomenon in that in just a little over twenty years since her first book, Harry Potter and the Philospher’s Stone (1997) she finds herself the fifth all-time best selling English fiction writer, behind William Shakespeare, Agatha Christie, Barbara Cartland, and Enid Blyton. The top-selling writer, the great William Shakespeare, had a four-century start on her.

Shakespeare’s language is so important to us that it would be almost impossible to communicate verbally without using words and phrases that first appeared somewhere in his texts. But what about J K Rowling quotes – does she have a similar impact?

Let’s see below, with 30 of JK Rowling’s best inspirational quotes taken from interviews and talks she has given, and 30 quotes from her Harry Potter novels.

“Are you the sort of person who gloats when they see a woman fall, or the kind that celebrates a magnificent recovery?”

“Destiny is a name often given in retrospect to choices that had dramatic consequences.”

“Failure is so important. We speak about success all the time. It is the ability to resist failure or use failure that often leads to greater success. I’ve met people who don’t want to try for fear of failing.”

“Failure meant a stripping away of the inessential. I stopped pretending to myself that I was anything other than what I was, and began to direct all my energy into finishing the only work that mattered to me. Had I really succeeded at anything else, I might never have found the determination to succeed in the one arena I believed I truly belonged.”

“I believe in free will. Of those that, like us, are in a privileged situation at least. For you, for me: people who are living in western society, people who are not repressed, who are free. We can choose. The things go largely like you want them to go. You control your own life. Your own will is extremely powerful.”

“I don’t think there’s any harm at all in allowing a kid to fantasize. In fact, I think to stop people from fantasizing is a very destructive thing indeed”

“I have never been remotely ashamed of having been depressed. Never. What’s to be ashamed of? I went through a really rough time and I am quite proud that I got out of that.”

“I’ve been writing since I was six. It is a compulsion, so I can’t really say where the desire came from; I’ve always had it. My breakthrough with the first book came through persistence because a lot of publishers turned it down!”

“If you choose to use your status and influence to raise your voice on behalf of those who have no voice; and if you choose to identify not only with the powerful but with the powerless; and if you retain the ability to imagine yourself into the lives of those who do not have your advantages, then it will not only be your proud families who celebrate your existence but thousands and millions of people whose reality you have helped transform for the better. We do not need magic to change the world, we carry all the power we need inside ourselves already: we have the power to imagine better.”

“Imagination is the foundation of all invention and innovation”

“Is ‘fat’ really the worst thing a human being can be? Is ‘fat’ worse than ‘vindictive’, ‘jealous’,”

“It is impossible to live without failing at something, unless you live so cautiously that you might as well not have lived at all – in which case, you fail by default.”

“It is our choices that show what we truly are, far more than our abilities.”

“It matters not what someone is born, but what they grow to be.”

“Let us step into the night and pursue that flighty temptress, adventure”

“Life is difficult, and complicated, and beyond anyone’s total control, and the humility to know that will enable you to survive its vicissitudes.”

“Poverty entails fear and stress and sometimes depression. It meets a thousand petty humiliations and hardships. Climbing out of poverty by your own efforts, that is something on which to pride yourself. But poverty itself is romanticized by fools.”

“Sometimes, you have to stop trying to force it, walk away and let your subconscious show”

“The knowledge that you have emerged wiser and stronger from setbacks means that you are, ever after, secure in your ability to survive.”

“The world is full of wonderful things you haven’t seen yet. Don’t ever give up on the chance of seeing them.”

“There is no good and evil, there are only power and those too weak to seek it.”

“We are only as strong as we are united, as weak as we are divided”

“We do not need magic to change the world, we carry all the power we need inside ourselves already: we have the power to imagine better.”

“We have to choose between what is right, and what is easy.”

“We’re all human, aren’t we? Every human life is worth the same and worth saving.”

“Whatever money you might have, self-worth really lies in finding out what you do best.”

“You will never truly know yourself, or the strength of your relationships until both have been tested by adversity.”

“You’ve got to work. It’s about structure. It’s about discipline. It’s all these deadly things that your schoolteacher told you you needed… You need it.”

“Why are they all staring? demanded Albus as he and Rose craned around to look at the other students.”
Don’t let it worry you, said Ron. “It’s me. I’m extremely famous.”

“Don’t talk to me.”
“Why not?”
“Because I want to fix that in my memory for ever. Draco Malfoy, the amazing bouncing ferret…”

“It’s going to be all right, sir,” Harry said over and over again, more worried by Dumbledore’s silence than he had been by his weakened voice. “We’re nearly there… I can Apparate us both back… don’t worr…”
“I am not worried, Harry”, said Dumbledore, his voice a little stronger despite the freezing water. “I am with you.”

“I’m not going to be murdered,” Harry said out loud.
“That’s the spirit, dear,” said his mirror sleepily.

Harry Potter and the Prisoner of Azkaban

“You sort of start thinking anything’s possible if you’ve got enough nerve.”

“He accused me of being Dumbledore’s man through and through.”
“How very rude of him.”
“I told him I was.”
Dumbledore opened his mouth to speak and then closed it again. Fawkes the phoenix let out a low, soft, musical cry. To Harry’s intense embarrassment, he suddenly realized that Dumbledore’s bright blue eyes looked rather watery, and stared hastily at his own knee. When Dumbledore spoke, however, his voice was quite steady.
“I am very touched, Harry.”

“It is our choices, Harry, that show what we truly are, far more than our abilities.”

Harry Potter and the Chamber of Secrets

“Just because you have the emotional range of a teaspoon doesn’t mean we all have.”

Harry Potter and the Order of the Phoenix

“He is dead!’ Narcissa Malfoy called to the watchers.

“Really Hagrid, if you are holding out for universal popularity, I’m afraid you will be in this cabin for a very long time””

The scar had not pained Harry for nineteen years. All was well.

“How do you feel, Georgie?” whispered Mrs. Weasley.
George’s fingers groped for the side of his head.
“Saintlike,” he murmured.
“What’s wrong with him?” croaked Fred, looking terrified. “Is his mind affected?”
“Saintlike,” repeated George, opening his eyes and looking up at his brother. “You see…I’m HOLEY, Fred, geddit?””

Mr. and Mrs. Dursley, of number four Privet Drive, were proud to say that they were perfectly normal, thank you very much.

“But you know, happiness can be found even in the darkest of times, if one only remembers to turn on the light.”

Harry Potter and the Prisoner of Azkaban

“I am what I am, an’ I’m not ashamed. ‘Never be ashamed,’ my ol’ dad used ter say, ‘there’s some who’ll hold it against you, but they’re not worth botherin’ with.”

“Never trust anything that can think for itself if you can’t see where it keeps its brain.”

Harry Potter and the Chamber of Secrets

“There are some things you can’t share without ending up liking each other, and knocking out a twelve-foot mountain troll is one of them.”

“There is no need to call me Sir, Professor.”

“Give her hell from us, Peeves!”

Harry Potter and the Order of the Phoenix

“Until the very end.”

“After all this time?”
“Always,” said Snape.

What do you think of these JK Rowling quotes – any great one’s that we’re missing? Let us know in the comments section below! 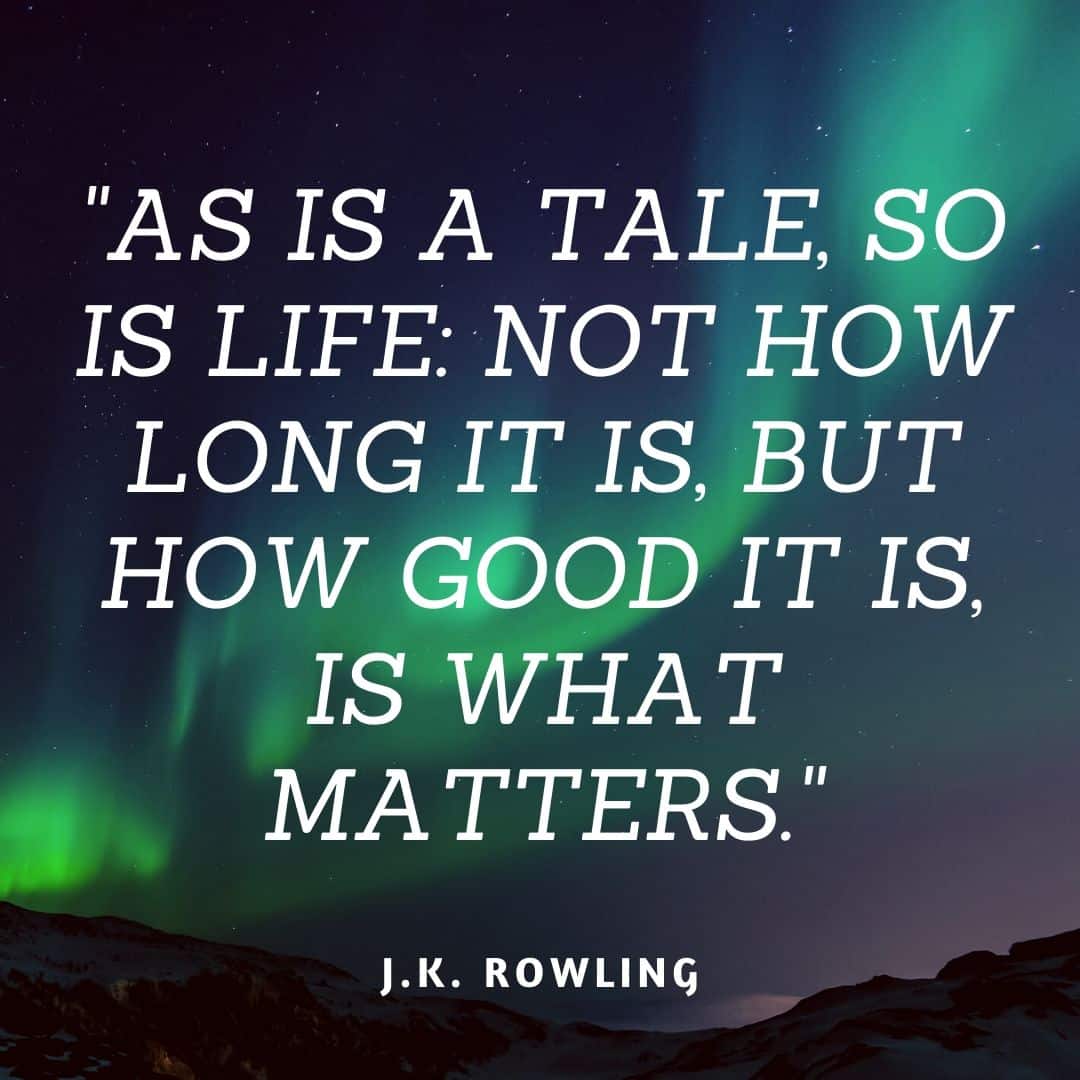