‘Salad days’ is a beautiful turn of phrase, coined by William Shakespeare and spoken by Cleopatra in Act 1, Scene 4 of Antony and Cleopatra.

In finding, as he always does, exactly the right words for something, Shakespeare uses the phrase ‘salad days’ in the context of a conversation about the lack of experience in relationships. In Antony and Cleopatra he has Cleopatra chatting to her attendant, Charmian. She enthuses about the man she has fallen in love with, one of the Roman triumvirs, Antony. Charmian reminds her that there was a time when she had raved about Julius Caesar, another Roman general, with whom she had had an affair, and produced a child. Cleopatra warns her that she will give her bloody teeth if she compares Caesar with her lover – her ‘man of men’ – again. But Charmian won’t give up: she says that she’s only quoting her mistress. Cleopatra says, perhaps so, but her praise of Caesar was made in her ‘salad days’ when she was ‘green’ in judgment and ‘cold’ in blood.

That is an image of her young self as a salad – green and cold – a dinner first course that comes before the richer, more substantial, hot main course. She is implying that she was young and inexperienced when she had her affair with Caesar. And compared with the boiling blood of her passion for Antony, her blood was cold in those days.

There is a great deal of talk among the Romans about the good living in Egypt and the food there which makes visitors fat. After one of the meetings among the top brass in Rome, everyone leaves, apart from Antony’s general, Enobarbus, and Pompey’s general, Menas. Talking about what happens next, Enobarbus says that Antony will now go back to his ‘Egyptian dish,’ meaning Cleopatra. She is now a dish fit for an emperor -her days of being a salad are far behind her!

Shakespeare also uses the idea of someone being green in Hamlet. When Ophelia talks to her father, Polonius, about her relationship with Hamlet, he says “You speak like a green girl/Unsifted in such perilous circumstances.”

Someone inexperienced being ‘green’ is an everyday construction in the modern world. ‘Salad days’ is a synonym for ‘green’ in that sense and comprehensively used as a title, always inferring youth and the errors of youth through inexperience – often suggesting a carefree life, a lack of responsibility.

Countless authors have used ‘Salad Days’ as a title for their books. The French novelist, Francoise Sagan’s most famous book is titled ‘Salad Days’, as is the autobiography of Douglas Fairbanks Jr. The number of cookbooks titled ‘Salad Days’ is incalculable. When Elizabeth II, Queen of England, made a Royal Address for her Silver Jubilee she said that she had made a vow to God and her people in her 21st birthday broadcast all those years ago and continued, quoting Cleopatra: “Although that vow was made in my salad days, when I was green in judgment,” it still held. Her conclusion, though, was different from Cleopatra’s. The Egyptian Queen had changed since her salad days, the English queen hadn’t. 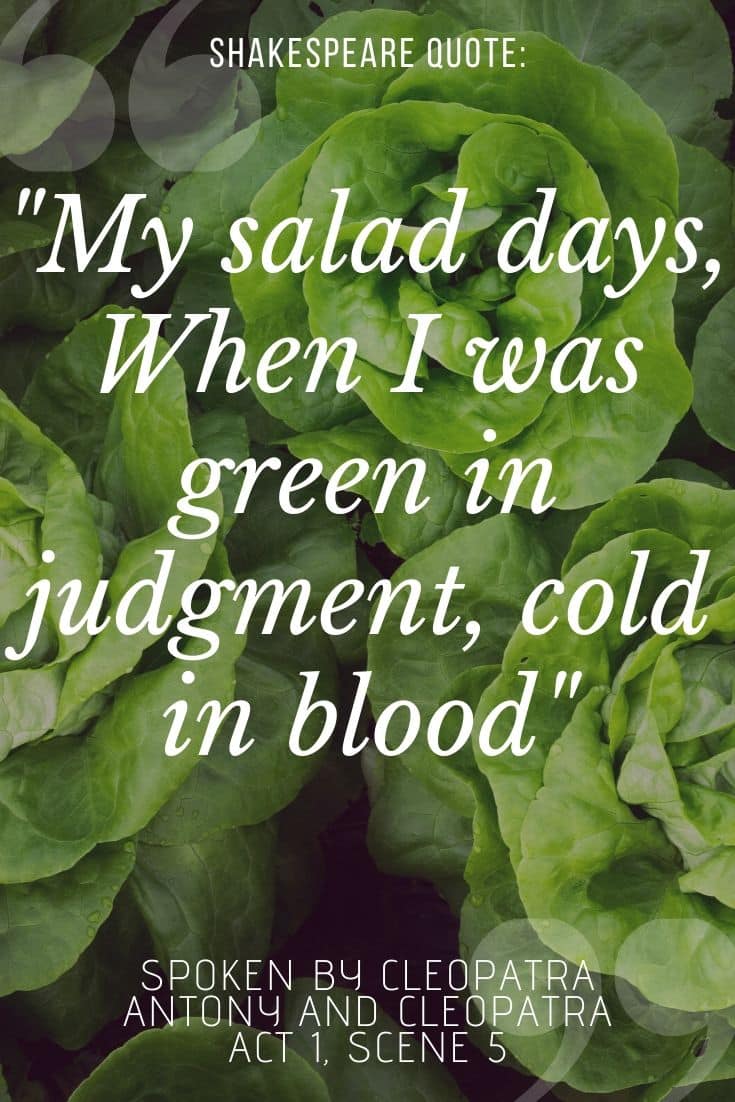