This page includes the top 100 Edgar Allan Poe quotes on love, literature, madness and more – from his personal letters, and both his stories and poems.

Edgar Allan Poe was an American writer, best known for his short stories and poems. He was one of America’s earliest practitioners of the short story form. His stories have a distinctive stamp on them: they were mainly stories of mystery and imagination, often employing the macabre, with subjects like premature burial, reanimation, slow decapitation, the effects of human decomposition, etc. They were, and still are, enormously popular. He was responsible for creating the detective fiction genre and his stories were ingenious exercises in mystery-solving, anticipating the Sherlock Holmes stories by Sir Arthur Conan Doyle. They were also influential in the emerging science fiction genre.

Poe’s fiction lends itself to film and television adaptations, particularly with regards to the current taste for the gothic. Horror films are big business and most of them, if not adaptations of Poe’s stories, are influenced by his stories’ bizarre, horrific situations. With this in mind, below are the top 100 Edgar Allan Poe quotes, split by category:

“It is with literature as with law or empire – an established name is an estate in tenure, or a throne in possession.”

Letter to Mr. B

“It is clear that a poem may be improperly brief. Undue brevity degenerates into mere epigrammatism. A very short poem, while now and then producing a brilliant or vivid, never produces a profound or enduring, effect. There must be the steady pressing down of the stamp upon the wax.”

“Nothing is more clear than that every plot, worth the name, must be elaborated to its dénouement before any thing be attempted with the pen. It is only with the dénouement constantly in view that we can give a plot its indispensable air of consequence, or causation, by making the incidents, and especially the tone at all points, tend to the development of the intention.”

“Literature is the most noble of professions. In fact, it is about the only one fit for a man. For my own part, there is no seducing me from the path.”

“I am actuated by an ambition which I believe to be an honourable one — the ambition of serving the great cause of truth, while endeavouring to forward the literature of the country.”

“With me poetry has been not a purpose, but a passion; and the passions should be held in reverence: they must not — they cannot at will be excited, with an eye to the paltry compensations, or the more paltry commendations, of mankind.”

Preface, The Raven and Other Poems

“Beauty is the sole legitimate province of the poem.”

“How many good books suffer neglect through the inefficiency of their beginnings!”

“Were I called on to define, very briefly, the term “Art,” I should call it “the reproduction of what the Senses perceive in Nature through the veil of the soul.” The mere imitation, however accurate, of what is in Nature, entitles no man to the sacred name of “Artist”.”

“In reading some books we occupy ourselves chiefly with the thoughts of the author; in perusing others, exclusively with our own.”

“Music, when combined with a pleasurable idea, is poetry; music without the idea is simply music; the idea without the music is prose from its very definitiveness.”

Letter to Mr. B

“A poem deserves its title only inasmuch as it excites, by elevating the soul.”

“There are certain themes of which the interest is all-absorbing, but which are too entirely horrible for the purposes of legitimate fiction.”

“Words have no power to impress the mind without the exquisite horror of their reality.”

The Narrative of Arthur Gordyn Pym

“Melancholy is … the most legitimate of all the poetical tones.”

“The death of a beautiful woman is, unquestionably, the most poetical topic in the world.”

“Deep in earth my love is lying
And I must weep alone.”

“To die laughing must be the most glorious of all glorious deaths!”

“The boundaries which divide Life from Death are at best shadowy and vague. Who shall say where the one ends, and where the other begins?”

“Come! let the burial rite be read–the funeral song be sung!—An anthem for the queenliest dead that ever died so young—A dirge for her the doubly dead in that she died so young.”

“Thank Heaven! the crisis—The danger is past, And the lingering illness, Is over at last—And the fever called “Living,” Is conquered at last.”

“The boundaries which divide Life from Death are at best shadowy and vague. Who shall say where the one ends, and where the other begins?”

“Sleep, those little slices of death — how I loathe them.”

“It is by no means an irrational fancy that, in a future existence, we shall look upon what we think our present existence, as a dream.”

“Deep into that darkness peering, long I stood there, wondering, fearing, doubting, dreaming dreams no mortal ever dared to dream before.”

“And all my days are trances
And all my nightly dreams
Are where thy grey eye glances
And where thy footstep gleams—
In what ethereal dances
By what eternal streams.”

To One in Paradise

“All that we see or seem
Is but a dream within a dream.”

A Dream Within a Dream

“Arousing from the most profound of slumbers, we break the gossamer web of some dream. Yet in a second afterward, (so frail may that web have been) we remember not that we have dreamed.”

The Pit and the Pendulum

“Yet mad I am not… and very surely do I not dream.”

“There is something in the unselfish and self-sacrificing love of a brute, which goes directly to the heart of him who has had frequent occasion to test the paltry friendship and gossamer fidelity of mere Man.”

“Because I feel that, in the Heavens above, The angels, whispering to one another, Can find, among their burning terms of love, None so devotional as that of ‘Mother.’”

“Yes, I now feel that it was then on that evening of sweet dreams—that the very first dawn of human love burst upon the icy night of my spirit. Since that period I have never seen nor heard your name without a shiver half of delight half of anxiety.”

“For passionate love is still divine / I lov’d her as an angel might / With ray of the all living light / Which blazes upon Edis’ shrine.”

“The most natural, and, consequently, the truest and most intense of the human affections are those which arise in the heart as if by electric sympathy.”

“O, human love! thou spirit given,
On Earth, of all we hope in Heaven!”

“I was never really insane except upon occasions where my heart was touched.”

“Thou wast that all to me, love,
For which my soul did pine —
A green isle in the sea, love,
A fountain and a shrine,
All wreathed with fairy fruits and flowers,
And all the flowers were mine.”

To One in Paradise

“And so being young and dipt in folly
I fell in love with melancholy.”

“Men have called me mad; but the question is not yet settled, whether madness is or is not the loftiest intelligence…”

“I was never really insane, except on occasions where my heart was touched.”

“I became insane, with long intervals of horrible sanity.”

“Men have called me mad; but the question is not yet settled, whether madness is or is not the loftiest intelligence— whether much that is glorious— whether all that is profound— does not spring from disease of thought— from moods of mind exalted at the expense of the general intellect.”

“I became insane, with long intervals of horrible sanity.”

“Although I saw that the features of Ligeia were not of a classic regularity—although I perceived that her loveliness was indeed ‘exquisite,’ and felt that there was much of ‘strangeness’ pervading it, yet I have tried in vain to detect the irregularity and to trace home my own perception of ‘the strange.’”

“It was a freak of fancy in my friend… to be enamored of the night for her own sake; and into this bizarrerie, as into all his others, I quietly fell; giving myself up to his wild whims with a perfect abandon.”

The Murders in the Rue Morgue

“Decorum – that bug-bear which deters so many from bliss until the opportunity for bliss has forever gone by.”

“The customs of the world are so many conventional follies.”

“Either the memory of past bliss is the anguish of to-day, or the agonies which are have their origin in the ecstasies which might have been.”

“I have great faith in fools — self-confidence my friends will call it.”

“If you wish to forget anything on the spot, make a note that this thing is to be remembered.”

“To observe attentively is to remember distinctly.”

The Murders in the Rue Morgue

“That man is not truly brave who is afraid either to seem or to be, when it suits him, a coward.”

“Beauty of whatever kind, in its supreme development, invariably excites the sensitive soul to tears.”

“The true genius shudders at incompleteness – imperfection – and usually prefers silence to saying the something which is not everything that should be said.”

“In our endeavors to recall to memory something long forgotten, we often find ourselves upon the very verge of remembrance, without being able, in the end, to remember.”

“Convinced myself, I seek not to convince.”

“Whether people grow fat by joking, or whether there is something in fat itself which predisposes to a joke, I have never been quite able to determine…”

“We should bear in mind that, in general, it is the object of our newspapers rather to create a sensation – to make a point – than to further the cause of truth.”

The Mystery of Marie Roget

What do you think of these Edgar Allan Poe quotes – any great ones that we’re missing? Let us know in the comments section below! 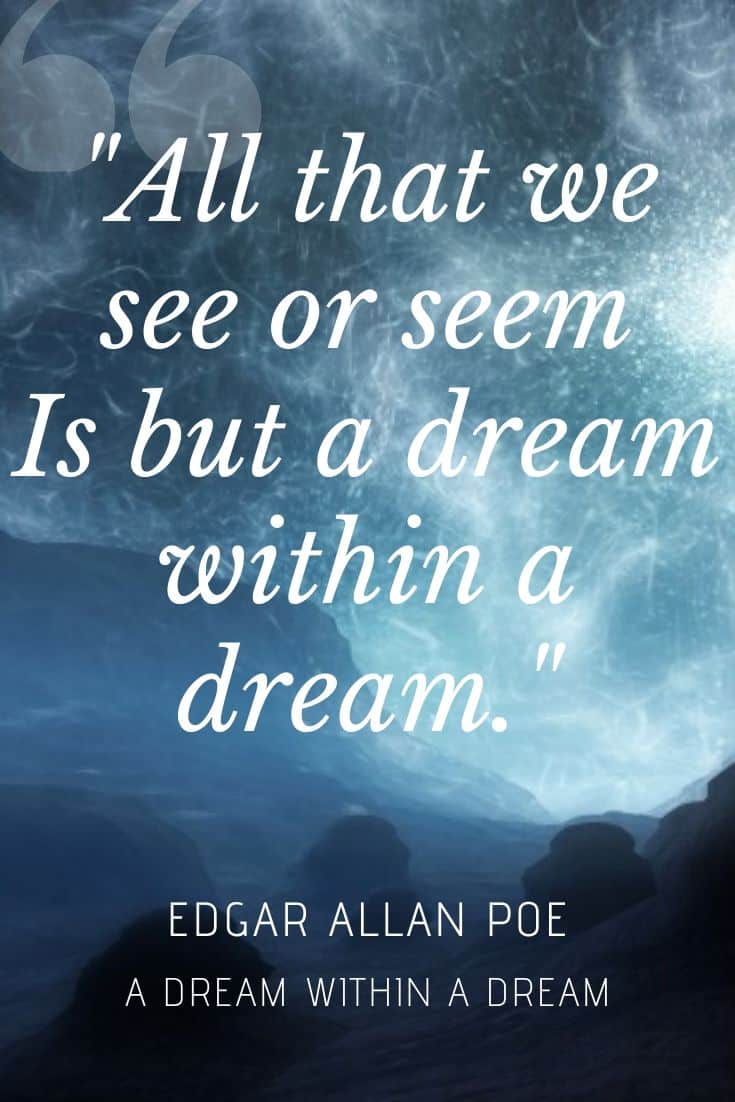