Meaning of “bite the bullet”

To bite the bullet means to face up to something you have to do and can’t avoid, regardless of how difficult that may be, and to accept the consequences, no matter how unpleasant they may be.

You may say something like: “I have to make two people redundant and I know they are going to hate me for the rest of their lives, but I just have to bite the bullet and call them in this afternoon.”

Origin of the idiom “bite the bullet”

The first appearance of the term “bite the bullet” was in the 1891 novel, The Light that Failed, by Rudyard Kipling. It was the Nobel prize-winning writer’s first novel, set in North Africa during one of the British Empire’s campaigns.

In that novel the term means to show courage, display a stiff upper lip, a very Victorian attitude. Kipling wrote a dialogue in that novel, which uses the expression where no actual bullet was involved but where grit and fortitude can be gained by biting a bullet:

‘Steady, Dickie, steady!’ said the deep voice in his ear, and the grip tightened. “Bite on the bullet, old man, and don’t let them think you’re afraid.”

The phrase appeared again, this time in the drawing rooms of the English upper classes, where Bertie Wooster, speaking to Jeeves in The Inimitable Jeeves, 1923, says:

“Brace up and bite the bullet. I’m afraid I’ve bad news for you.”

It has been suggested that the idiom is derived historically from the practice of having a patient clench a bullet in their teeth as a way of coping with the pain of surgery without anaesthetic, though it was more common to bite a leather strap during surgery. It is possible that the phrase evolved from the British expression “to bite the cartridge”, which dates to the Indian Rebellion of 1857 but the phrase “chew a bullet”, with a similar meaning, dates to the eighteenth century.

The phrase was used in a literal sense in the 1975 film Bite the Bullet. One of the characters has a broken, aching tooth and cannot get treatment. He uses a shell casing to cover the exposed nerve; the slug is removed from the bullet, the cap was hit to expend that charge, and the casing was cut down to allow it to sit level with his other teeth.

Literally biting a bullet does, in fact, date from before the American civil war, as this definition of ‘nightingale’ in Francis Grose’s Classical dictionary of the Vulgar Tongue, 1796 asserts:

“Nightingale. A soldier who sings out at the halberts. It is a point of honour in some regiments, among the grenadiers, never to cry out, or become nightingales, whilst under the discipline of the cat of nine tails. To avoid that they chew a bullet.”

There is another theory that the expression derived from incidents in the Indian Rebellion of 1857. The Sepoys were Indian fighters who were recruited to fight with the British Army. When a new design of rifle was issued, which used greased paper cartridges that needed to be bitten to release their powder, the Sepoys objected on religious grounds. The Hindus among them feared that the grease was made from cow fat and the Muslims that it was made from pig fat. The requirement that the Sepoys ignore their religious qualms and ‘bite the bullet’ is suggested as the source of the phrase. 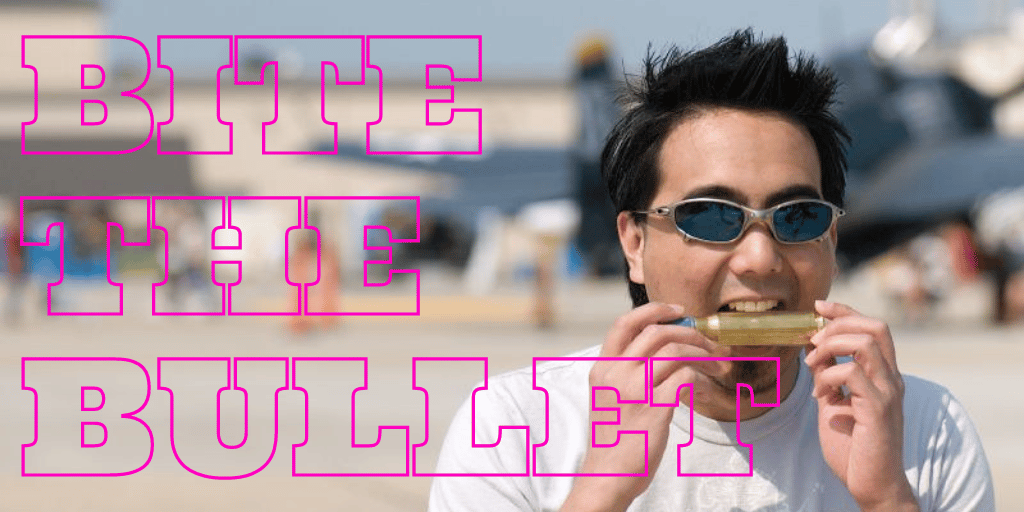 Biting on something to tolerate pain

Does biting on something to deal with pain work? The idea is that patients undergoing surgery would be given a piece of wood or a pad of leather, like a strap or belt to bite on in order to concentrate their attention away from the pain and also to protect against biting their own tongues. A bullet might have been an impromptu battlefield alternative. Lead poisoning would be a threat but would probably have been less of a concern than the pain of having your arm cut off!

It has been suggested that, as wooden sticks are known as billets, the stick-biting practice might have first been called “biting the billet” which was then corrupted to “biting the bullet.”

Many artists, notably Rembrandt Van Rijn and Hieronymus Bosch, painted scenes of early surgery and none of those paintings shows patients biting into anything. Whether or not they might have been given something to bite on, there’s little doubt that they would have been sedated with rum or brandy.