Meaning of ‘the dogs of war’

The dogs of war is a way of describing the destruction and chaos, such as the deaths and displacement of people caused by war. The line originated in Shakespeare’s Julius Caesar:

At that time, Havoc was actually a military command that told the soldiers they could loot at will, becoming even more of a force of destruction and chaos. Today, the term the dogs of war may be used both to refer to actual dogs used in combat and to battle-hardened soldiers, as well as the actual chaos caused by conflict.

Origin of ‘the dogs of war’

‘The dogs of war’ speech is spoklen by Mark Antony in Act 3, Scene 1 of Shakespeare’s Julius Caesar.

After the conspirators have murdered Caesar Mark Antony is alone with Caesar’s body. In his soliloquy, he reveals his intention to incite the crowd to rise up against the assassins. Foreseeing violence throughout Rome, Antony imagines Caesar’s spirit exhorting action against the assassins:

“raging for revenge, with Ate by his side come hot from hell, shall in these confines with a Monarch’s voice cry ‘Havoc!’ and let slip the dogs of war.’ “

The use of dogs in historic wars

Usually referred to as man’s best friend, dogs have been used in warfare since their domestication more than 50,000 years ago. They were not only used in the attacks but also for protecting livestock or property, or just companionship.  War dogs have been documented as being used by many historic armies: Romans, Egyptians, Greeks, Persians, Britons, and others.

The earliest written account of war dogs comes from an ancient Greek source regarding Alyattes, King of Lydia. The source maintains that dogs have attacked and killed invaders in a battle as early as 600 BC.

In antiquity, troops from Anatolia used war dogs to supplement their cavalry. Riders let their hounds loose on the enemy to disrupt lines, and then the mounted warriors would charge, and finish the job.

Xerxes I of Persia invaded Greece in 480 BC and brought large packs of Indian hounds.

War dogs are said to have been present at the Battle of Marathon, dating to 490 BC, between the Greeks and the Persians. 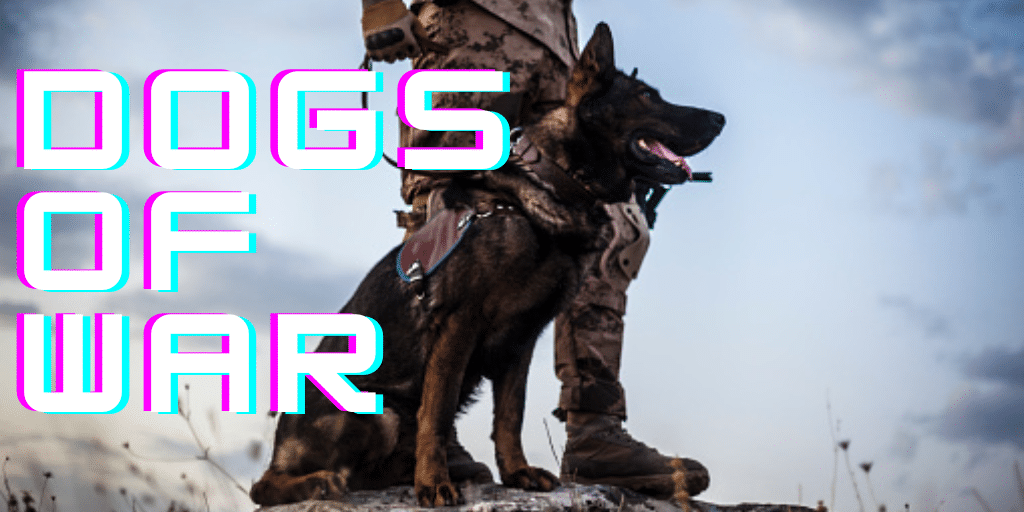 “Dogs of war”, a Shakespearean phrase

The use of other animals in war

Man and animals, not only dogs, but many other animals – particularly horses – have partnered for tens of thousands of years – almost always for food or security. The history of animals in warfare isn’t pleasant reading, but without their use in war human history would be very different from the way it is.

The image of a mounted warrior is the epitome of the symbol of animals in war, but many animals, apart from horses – dogs,  camels, dolphins, elephants, oxen, pigs, pigeons and more –  have all played roles in war. Some animals were turned into weapons, while others were used for transportation. Still others were used as mascots to boost morale.

Horses have played the greatest role in the history of animals in warfare. Horses were domesticated as early as 5000 BC in Kazakhstan. Used at first to provide food and milk, they began to serve as an important military instrument in warfare; for thousands of years man recognized the advantages of using them in battle, and in civilian life, until they were replaced within only the last century with motor vehicles and other machines.

The “dogs of war” in popular culture

Many cultural items are titled using variations of the phrase “dogs of war” have become idiomatic, used by books, films, video games, songs, and television episodes.

In Les Misérables Victor Hugo used the image of dogs as a metaphor for guns and their barking for the noise of cannon fire:

“Another cannonade was audible at some distance. At the same time that the two guns were furiously attacking the redoubt from the Rue de la Chanvrerie, two other cannons, trained one from the Rue Saint-Denis, the other from the Rue Aubry-le-Boucher, were riddling the Saint-Merry barricade. The four cannons echoed each other mournfully. The barking of these sombre dogs of war replied to each other.”

“Dogs of war” appeared in Star Trek VI: The Undiscovered Country, in which the Klingons  attack the USS Enterprise.

The Dogs of War (1974) is a novel by British writer Frederick Forsyth, featuring a group of European mercenary soldiers hired to depose the government of the fictional African country of Zangaro.

Kevin Spacey used the phrase in House of Cards in his campaign to undermine the President and advance his plan to get control of the White House and the presidential power.

“Dogs of War” is used in the boardgame Warhammer: referring there to mercenary soldiers