“Making the beast with two backs” was an Elizabethan street term that Shakespeare used in Othello. Indeed, as with many other common phrases, Shakespeare may have been the first to use it in a written English text.

Elizabethan Londoners loved it when they went to the theatre and saw people like themselves talking like they did, and Shakespeare often used street language. This example is a graphic image, in language, of two people engaged in the act of sex. Shakespeare wanted to create that image in as crude a way as it was possible, to make it part of his characterisation of the character who says it.

Shakespeare’s use of ‘the beast with two backs’ phrase

Othello opens in a street in Venice with two men having a conversation about the Moorish army general, Othello. Roderigo is complaining to Iago about the fact that he has been giving Iago money to get influence with the general’s friend, the senator, Brabantio, because he wants to woo the senator’s beautiful daughter, Desdemona. But now, he has just discovered that Desdemona has eloped with Othello and they have married.

Iago, one of Othello’s senior officers, hates Othello, and we see as the play goes on, that he will do anything to undermine the General. The two decide to wake Brabantio up and tell him that his daughter has run off with Othello. Roderigo hopes he will be able to do something about it.

They arrive at Brabantio’s house and wake him up by calling out to him. He appears at a window and they shout up to him.

It is an important scene because one of the main themes of the play is racism. Othello is black. He is a decent, honourable man, with a brilliant military and human record, and he is regarded as by far the most competent military leader in Venice. However, the very people who esteem him so highly are also racist, and the clichéd question about whether one would like one’s daughter to marry a black man is the question here.

Brabantio, in particular, liked and courted the general. Othello was a regular guest in his house, where he would tell Brabantio exotic stories of his travels and adventures. Desdemona joined them to listen to these stories and, slowly, fell in love with the General. He picked up the signals and approached her. She had no hesitation in leaving the protection of her father and running off with him.

The senator who had loved Othello is now confronted with the fact that he has become his son-in-law, and he doesn’t like it,

In talking about Othello, Roderigo refers to him as “the thick lips,” and now, in front of Brabantio’s house, Iago puts an image in Brabantio’s mind that he knows will drive the Senator crazy. “Even now, now, very now,” he says, “an old black ram is tupping your white ewe.” He tells him to hurry or the devil will make a grandfather of him.

Brabantio doesn’t understand at first, and wonders whether this is just a madman. But Iago pushes it futher, still invoking racialist pictures:

Brabantio demands to know who he is and Iago now finds the most visual image to spell it out:

“I am one, sir, that comes to tell you, your daughter and the Moor are now making the beast with two backs.”

Brabantio is all fired up at last, as the image takes hold and he understands that his daughter has run off with the Moor. He rushes off to the Duke in a panic, to try and put a stop to it. By that time, what he regards as the horror of his beautiful daughter running away with a black man has captured his imagination.

Once again, we see an example of Shakespeare’s genius with language. He takes a bit of street slang and makes it the linguistic centrepiece of a major theme in one of his plays.

‘The beast with two backs’ pre-Shakespeare

“The beast with two backs” is a word picture that had been used before, notably by Rabelais, the French writer of crude burlesque stories in his  Gargantua and Pantagruel, a half a century before Shakespeare wrote Othello:

“In the vigour of his age he married Gargamelle, daughter to the King of the Parpaillons, a jolly pug, and well-mouthed wench. These two did oftentimes do the two-backed beast together, joyfully rubbing and frotting their bacon ‘gainst one another…” 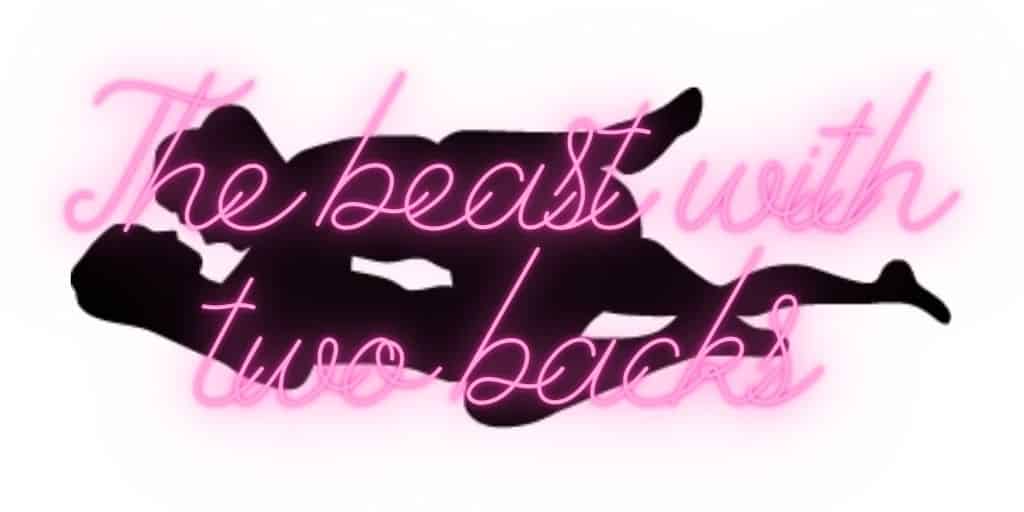 Making the beast with two backs…