The saying ‘one fell swoop’ is one we use all the time. For many it won’t even be necessary to explain what the phrase means… but here it is: ‘one fell swoop’ means doing a lot of things all at once, with one action. For example, ‘I got up the courage and tidied everything in my office at one fell swoop.’

It may be a cliché to say that Shakespeare’s genius with the use of imagery knows no bounds, but one cannot really put it in any other way. That genius is beautifully demonstrated in the way he uses bird imagery in Macbeth.

In act 5, scene 3, when Macduff is told that Macbeth’s thugs have murdered the whole of his family he says:

‘All my pretty ones? Did you say all?
O hell-kite! All?
What, all my pretty chickens and their dam at one fell swoop?’

The imagery in that passage is all about birds. First, by now Macbeth has become a murderous tyrant and the image casts him as a kite. Kites are birds of prey that swoop silently in a curved projectile and grab their prey – mainly small mammals and birds.  Then we have the image of a mother hen with her chickens and the almost visual image of a kite swooping down and taking them all in one go.

It is a ‘fell’ swoop. We use the term ‘one fell swoop’ correctly without actually thinking about the meaning of the words. That silent swoop is one thing, but what about ‘fell?’ We don’t use the word on its own anymore. It has the same root as ‘felon’ and ‘felony,’ meaning criminal and crime. So here we see Macbeth as a criminal – a bird of prey preying on innocent chickens – all in that wonderfully short passage.

But that is just a small part of what Shakespeare is doing in this play with bird imagery. Another wonderful piece of craftsmanship on Shakespeare’s part is where we see Lady Macbeth turning Glamys castle into a dark, evil place, an actual hell, with her evocative language –’come thick night,’ ‘the dunnest smoke of hell,’ etc.

Then we see Duncan arriving at the castle to visit. It is an arrival full of dramatic irony as he doesn’t know what we know, which is that he is going to be murdered there. Lady Macbeth has just said ‘the raven himself is hoarse/That croaks the fatal entrance of Duncan/Under my battlements.’ This is an image of the bird of death. When Duncan and Banquo arrive, though, they pause outside the castle gates. It is a lovely day and they are enjoying being about to enter what they think is a heavenly place. ‘This castle has a pleasant seat; the air/Nimbly and sweetly recommends itself/Unto our gentle senses,’ Duncan says. Banquo agrees, and adds: ‘This guest of summer/The temple-haunting martlet, does approve/By his loved masonry that the heaven’s breath/Smells wooingly here.’

Again, it is about birds – here it is the opposing images of the raven and the martin.

The Macbeth text carries on with this bird imagery all the way through. Lady Macduff, for example, compares her husband to a tiny, weak wren. He has left his family defenceless and gone to England. She tells her son that his father doesn’t even have the courage of a wren: ‘He loves us not; / He wants the natural touch: for the poor wren, /The most diminutive of birds, will fight, / Her young ones in her nest, against the owl.’

The owl, a frightening bird of prey, is, of course, Macbeth. Lady Macbeth foreshadows the predatory state that Macbeth is heading for when, after the murder of Duncan, she says she heard an owl screech.

There are many more bird images: for example, the falcon and the eagle. Their power and courage and strength are the qualities that Macbeth possesses when we first meet him and so he is described as both a falcon and an eagle. (See our piece on bird quotes across all of Shakespeare’s works.)

And so ‘at one fell swoop,’ taken out of context means things we do all at once, but hidden in there we can still hear the suggestion of something nasty, even though we use the idiom without intending anything nasty – although it still suggests something swift and, possibly, unexpected. 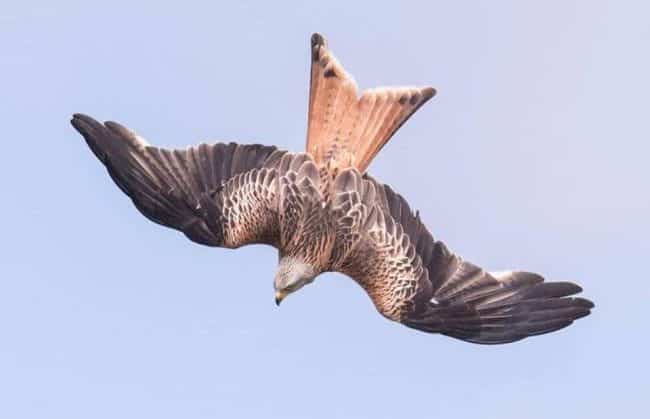 A red kite taking its ‘one fell swoop’