Shakespeare uses a phrase very common today in modern English –  “lie low” –  in his play, Much Ado About Nothing. He uses it in the same way as it was originally used, which is a description of a dead body being laid out, and therefore, in that context, the phrase meant the state of being dead.

The phrase dates back to Old English. It was commonly used during that time in the sense that Shakespeare used it, meaning to be dead.

These days we don’t use “lie low” as it was used in Shakespeare’s time. Its meaning has evolved into something else: we take the phrase itself and use it to mean keeping a low profile, somewhat like a dog trained to “play dead.”

Lie low means to stay out of public view, not draw attention to oneself by speaking out or making a scene, to avoid being noticed.

In Much Ado About Nothing

In Much Ado About Nothing, the governor of Sicily, Leonata, is entertaining some friends who are on their way back from the wars. One of them, Claudio, falls in love with his daughter, Hero, and they plan to get married. However, some villains manipulate events so that Claudio is tricked into thinking he is seeing his bride-to-be being unfaithful to him with another man. Incensed, he waits for the marriage ceremony to denounce her. Leonata is so angry with him that he could kill him and all his friends. He shares his feelings with his brother, Antonio:

My soul doth tell me Hero is belied,
And that shall Claudio know; so shall the Prince
And all of them that thus dishonour her.
Act 5, Scene 1

Claudio and his commanding officer, the Prince, appear. Leonata is uncharacteristically unfriendly towards them and the Prince asks him not to quarrel with them. Antonio warns them about Leonata’s mood. He tells them that this is way beyond quarrelling and that Leonata is ready to kill some of them.

If he could right himself with quarrelling,
Some of us would lie low.
Act 5, Scene 1

In Julius Caesar, Caesar’s friend, Marc Antony, arrives at the Capitol just after Caesar has been assassinated and looks down at his body. He says:

O mighty Caesar! dost thou lie so low?
Are all thy conquests, glories, triumphs, spoils,
Shrunk to this little measure? Fare thee well.

Famous uses of the phrase “lie low” in literature

I Could Give All To Time by Robert Frost

To Time it never seems that he is brave
To set himself against the peaks of snow
To lay them level with the running wave,
Nor is he overjoyed when they lie low,
But only grave, contemplative and grave.

The lonely season in lonely lands, when fled
Are half the birds, and mists lie low,
and the sun Is rarely seen,
nor strayeth far from his bed;
The short days pass unwelcomed one by one.

I’m tired of this ‘we better lay low, or someone will figure out we’re different’ crap. I mean, it’s not like if I win a match people are going to say, who’s that kid, he’s a really good wrestler, he must be an angel.”

I’ve been told my old city possesses a ‘thriving arts scene,’ whatever that is; personally, I think artists should lie low and stick to their work, not line-dance through the parks. 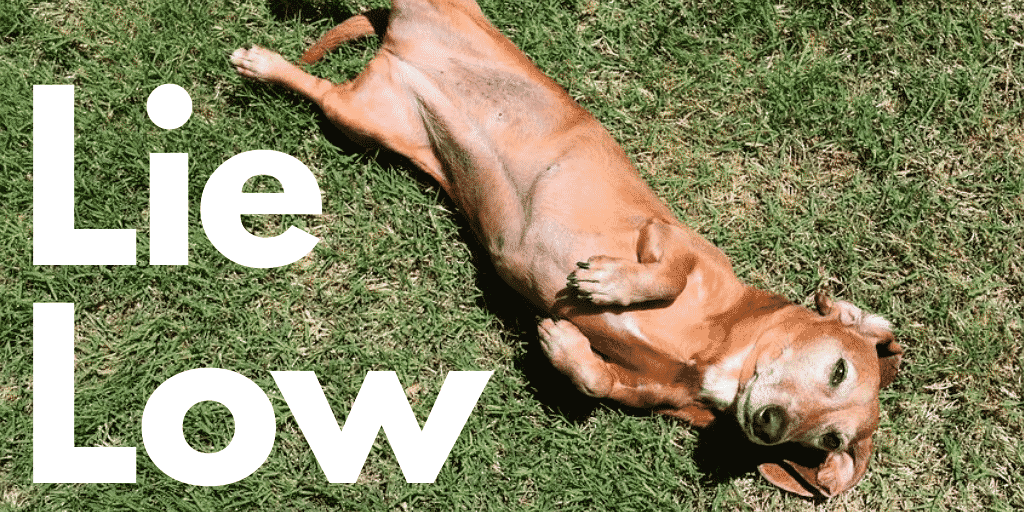