‘As Luck Would Have It’, Meaning & Context

‘As luck would have it’ is an English idiom that refers to the role of chance, fate, or what we simply call ‘luck,’ in life. It has been around for a long time, long before the time that Shakespeare was writing, but it is in a Shakespeare play, The Merry Wives of Windsor, that it first appears in literature.

Origin of ‘as luck would have it’

In The Merry Wives of Windsor play 0f 1600 the phrase is expressed as “as good luck would have it.” In Act 3, Scene 5, Falstaff says:

“You shall hear. As good luck would have it in comes in one Mistress Page; gives intelligence of Ford’s approach; and, in her invention and Ford’s wife’s distraction, they conveyed me into a buck-basket.”

As is often the case with an idiom that derives from a phrase in a Shakespeare play, the wording of the modern idiom is slightly different from the way it appears in the play: the modern use of the idiom doesn’t include the word “good.”

A Shakespeare phrase is often taken into everyday speech and over time a word is dropped or added or changed, and it finally settles down as the idiom that we use today. We don’t usually use the word “good” in the idiom now so the phrase ‘As luck would have it’ refers to either good or bad luck. 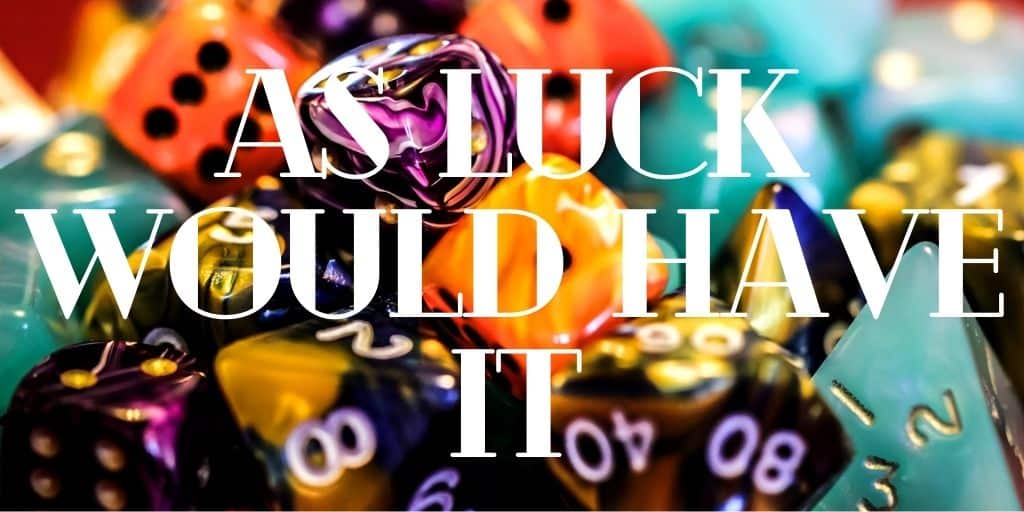 Shakespeare’s idiom: ‘As luck would have it’

Luck as plot structure in Romeo and Juliet

Shakespeare was, of course, aware of everything that affects the lives of human beings and, indeed, luck and, its effect on the course of the life of individuals and societies being something we all experience, it is prominent in the plots of his plays.

The plot of one of his plays, Romeo and Juliet, is actually structured around luck, in the broader sense of fate, providence, co-incidence, chance – all more or less synonyms for ‘luck,’ – guiding the actions of the characters as they respond to the world around them.

The young lovers meeting each other in the first place is a matter of chance, as Romeo gatecrashes a party in her father’s house in a quest to catch a glimpse of another girl he has fallen in love with, and sees Juliet for the first time.

Matters progress from their ill-fated meeting and they rashly marry. Immediately after that Romeo is brought down by a massive piece of bad luck. He kills Tybalt, a Capulet, mainly by accident. Struck by the extreme bad luck of it he cries, “Oh I am fortune’s fool!” When he is banished and a message is sent to him that Juliet is faking her death and waiting for him in the family tomb, the messenger is caught up in a quarantine lockdown so that Romeo doesn’t get it. And finally, it is very bad luck that, thinking Juliet dead, Romeo kills himself and dies seconds before she wakes up.

Macbeth rejects the influence of luck by defying fate

As Macbeth considers killing Duncan he is tempted just to wait and see if some stroke of luck might elevate him to the crown and he would therefore avoid having to kill Duncan to become king himself. “Chance may crown me without my stir,” he tells himself, but then decides to reject the vicissitudes of fate, chance or luck, and make sure of killing Duncan so that he can become king. His repeated efforts to control his fate fail and he ends up having to submit to it.